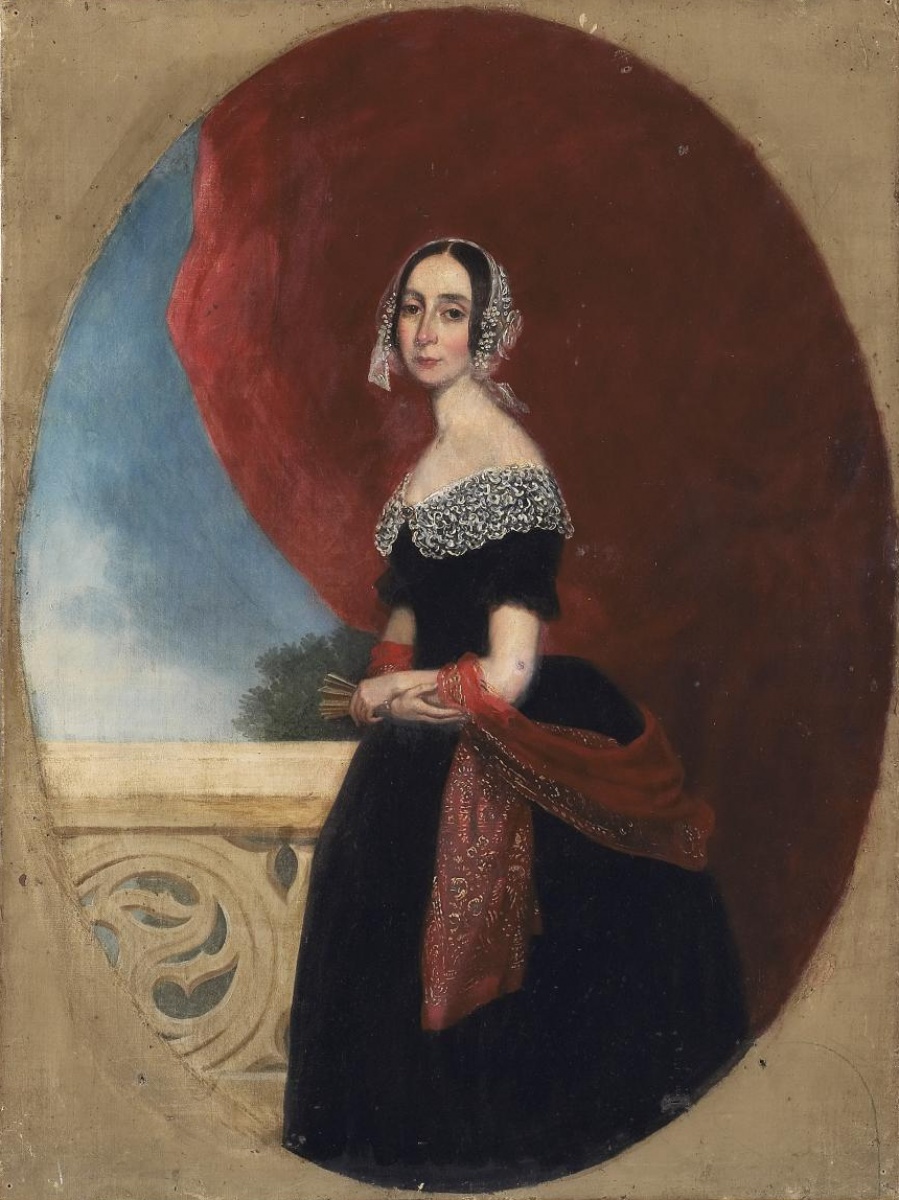 Researching women’s lives in historical records is often a challenge, due in large part to the lack of attention paid to women and women's labour throughout history. As we prepare to celebrate International Women’s Day on March 8, Georgiana Uhlyarik, Fredrik S. Eaton Curator of Canadian Art, joins AGO Conservators Sherry Phillips and Meaghan Monaghan for a special edition of Close Looking, highlighting  the ways that objects can address those gaps. Their focus: a portrait and shawl from the AGO Collection, once owned by Anna Maria Walton Beck Boulton (1799-1862), a relation to the residents of The Grange, the family home built in 1817.

For more insight, we turn to Sherry Phillips:

The clues that reveal personality and life can be found in the clothing and adornment people wear, whether in a historical painting or a selfie. Stored in the AGO Collection vaults  is a special pair of objects that have remained together for 170 years ‒ a portrait of Anna Maria Walton Beck Boulton and the actual shawl she wore in the painting ‒ that provide a fascinating and revelatory glimpse into her world in the mid-1800s in Canada West (known today as Ontario).

Taken together, these two objects, with the generous help of historians and archivists, reveal the complexity of female biography. In the portrait, donated to the AGO in 2006 by the sitter’s descendants, the subject comes into focus in 1840, when she married George Strange Boulton and moved from Schenectady, New York to Cobourg, Ontario. It was the second marriage for both individuals. Her inherited family wealth, together with his family associations, success as a lawyer and developer, meant they could live a comfortable life. Her husband was one of the younger brothers of D’Arcy Boulton, who built The Grange in 1817. It is probable the couple visited The Grange, and the new Mrs. Boulton took advantage of social events and shopping while in Toronto.

The portrait of Mrs. Boulton painted by George Théodore Berthon reveals a correct public image of a woman in the 1840s. Berthon may have arrived in Toronto around 1845 when Mrs. Bolton would have been 46 years old. Dresses during that time period would have been handmade. The intricacies of its construction were challenging for the home sewer and seamstress, so women who could afford it would have had to hire a dressmaker. A symbol of status and influence, having a dressmaker is a revealing aspect of social dynamics. For example, we know that it was during a visit to Schenectady that Mrs. Boulton met a young woman named Margaret Brown. Mrs. Boulton would go on to sponsor Mrs. Brown’s move to Toronto in 1858 so she could study dressmaking in the atelier of the esteemed Mrs. Lyon, herself a purveyor of goods from Paris. Mrs. Brown eventually opened her own dressmaking establishment in Mrs. Boutlon’s hometown of Cobourg in 1859. 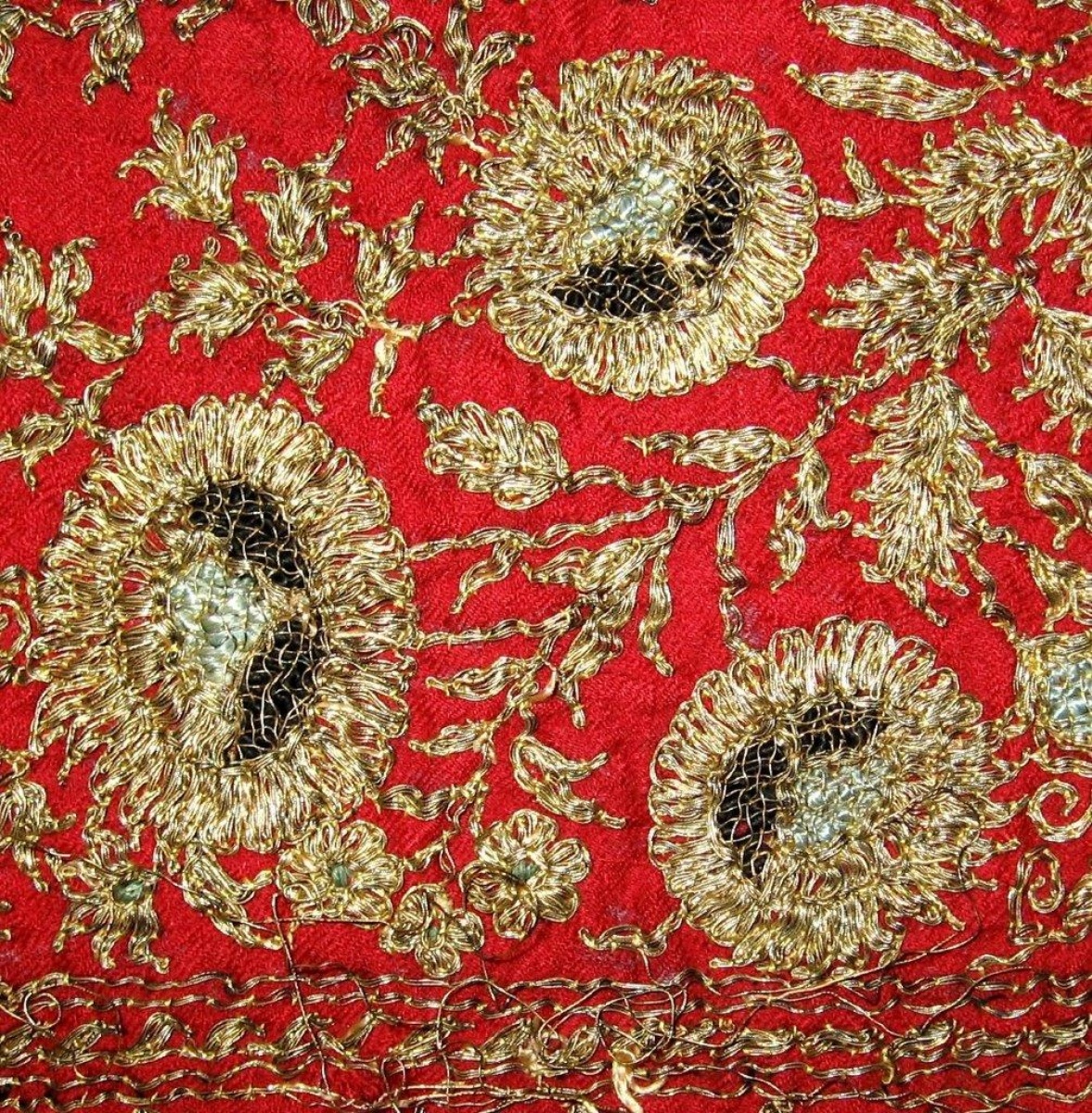 Mrs. Boulton’s shawl would have been among her prized possessions ‒ a luxury item as valuable as a significant piece of jewellery. Likely Indian or British in origin, its style is based on Kashmiri shawls. The Kashmiri cashmere and pashmina textile trade existed for centuries before the shawls became popular in Europe. Following the expansion of trade led by the British East India Company in the late 1700s, Kashmiri shawls became popular as gifts, souvenirs and highly collectible objects. Eventually, manufacturing centres in India, France and Britain emulated and imitated Kashmiri designs using wool and silk fabrics. Freely appropriating classic Persian or Indian buta or boteh motif, these prints would be known to many as Paisley, a name taken from the Scottish town of Paisley, where many of the fabrics were produced.

Women living in urban centres in North America would have been up-to-date with the latest European fashions. Napoléon reportedly gave Marie Louise 17 Kashmir shawls as a wedding gift in 1810 and influenced a trend among fashionable Europeans. Perhaps the Victorian fascination with the language of flowers means there are covert meanings and messages behind the shawl design. Flower dictionaries were published as early as 1819, with the first being Le langage des fleurs by Charlotte de Latour.

Unlike Kashmiri shawls where the design is woven through the cloth, Mrs. Boulton’s shawl is surface embroidered or couched, with gold-toned metal-wrapped silk core threads and coloured embroidered silks on a still vibrant red, woven silk ground. It would have glimmered in the candlelight when Mrs. Bolton wore it on special occasions.

On March 8, International Women’s Day, Georgiana Uhlyarik, Fredrik S. Eaton Curator of Canadian Art, will be in conversation with AGO Conservators Sherry Phillips and Meaghan Monaghan as they take a closer look into the life of Anna Maria Walton Beck Boulton. Join them at 11 am on Facebook Live as they look at fashion, art and history.