We currently believe that J. Schul may be Johan Christoffel Schultz, a Dutch painter and printmaker who lived from 1749-1812, or perhaps his uncle, Jeremias Schultsz, (dates unknown). Several of Johan’s prints survive, depicting affluent, well-dressed sitters from the 1770s, '80s, and '90s, signed in a variety of manners, including “J. C. Schulz pinxit” in 1796 and “J. C. Schultsz delin. et sculp.” in 1787 ("J. C. Schultsz drew and engraved this"). Two painted portraits from the 1780s signed "J. Schultz fecit," currently attributed to Jeremias Schultz, also survive. It was not entirely uncommon for an artist to spell his name differently at different moments in his career. As a result, we see signatures Schul, Schult, Schulz, Schultsz, all by the same artist, often using a Latin verb, in the 1770s, '80s, and '90s.

We are working quickly to learn more about these artists in order to determine if either traveled outside of Europe, although it appears both were based in Amsterdam. This research will have an important impact on how we understand the Portrait of a Lady Holding an Orange Blossom and the woman depicted.

Very few portraits of people of colour by European artists survive from this period. In our collection, Black subjects appear in several paintings, where they are cast in positions of servitude and enslavement. Four examples appear below. 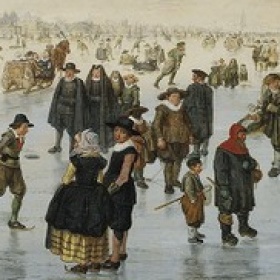 Skaters on the Amstel 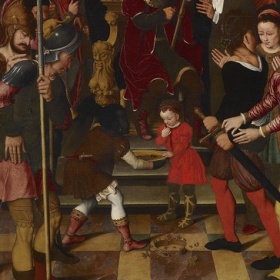 Attributed to Pieter Claeissens the elder 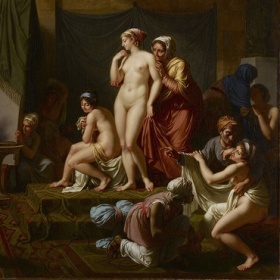 The Toilet of Bathsheba

This new acquisition is an exceptionally rare portrait of an individual woman of colour with all signs pointing to the wealth and status of the sitter. While the sitter’s depiction in opulent dress and the mere existence of the portrait suggest that she may have been a free woman, she may have descended from both colonizers and enslaved people. Our ongoing research aims to better understand the woman in the painting and the life she lived.

In preliminary conversations, and as part of our ongoing research, we are speaking with experts in different fields to discover more about where and when the painting was made, who the subject might be, and who painted the portrait. Each discussion raises more questions, and as we listen, we are grateful and excited for the new knowledge and dialogue that might emerge around this work.

A PORTRAIT OF POSSIBILITIES

Introduction to the series

Curators Adam Levine and Monique Johnson discuss their process and the different questions they hope to answer as they peel back the layers of Portrait of a Lady Holding an Orange Blossom. In the following audio episodes, they share with you the first of these conversations with experts.

A Portrait of Possibilities - The Painting as a Physical Object

The Painting as Object

As art historians, we begin with the object itself. Our first conversation is with Maria Sullivan, Head of Conservation here at the AGO, to ask her about what evidence we can find in the physical painting itself. How can paint, canvas, and wood stretchers help us understand not only more about the painting’s creation, but also the life the painting has lived since? We ask Maria about the painter’s signature, why it is currently so hard to read, and what we can do in the future to learn more about this critical site on the canvas.

We look forward to future discoveries through conservation analyses!

A PORTRAIT OF POSSIBILITIES - The Dress

One critical object in our research is the sitter’s blue dress: this can help us understand when the painting was made and even offer insight into the life of the painting’s sitter. We interview two local experts on the history of dress: Ingrid Mida, PhD, author of The Dress Detective and Reading Fashion in Art and Alexandra Palmer, PhD, Nora E. Vaughan Senior Curator, Global Fashion & Textiles, at the Royal Ontario Museum. They tell us that the style of the dress corresponds to fashions worn in the 1770s. An analysis of the bodice of the dress indicates that the woman in the portrait may be younger than we first thought. We discuss what the dress and jewelry might reveal about the subject’s status and learn about the manufacture of and global trade in textiles in the eighteenth century. Where in the world were such items made, available, and worn?

Since this interview, Portrait of a Lady Holding an Orange Blossom has also been featured on the Fashion History Timeline with an extended entry written by fashion scholar Kenna Libes. Libes' analysis and proposed date corresponds to the date range suggested by Dr. Mida and Dr. Palmer. The essay can be consulted here: https://fashionhistory.fitnyc.edu/1770s-lady-holding-an-orange-blossom/

A PORTRAIT OF POSSIBILITIES - Race and Representation

We speak with Charmaine A. Nelson, PhD, Canada Research Chair in Transatlantic Black Diasporic Art and Community Engagement at NSCAD University, about issues of race and representation in eighteenth-century portraiture. Portrait of a Lady Holding an Orange Blossom was painted at the height of Trans-Atlantic Slavery. Dr. Nelson stresses the rarity of a “high art” individual portrait of a woman likely of African ancestry from this period. In discussing this portrait alongside two other paintings of women of colour whose lives we know more about, François Malépart de Beaucourt’s painting, variably called Portrait of a Haitian Woman and Portrait of a Negro Slave (1786), and David Martin’s Portrait of Dido Elizabeth Belle Lindsay and Lady Elizabeth Murray (c. 1778), Dr. Nelson questions how our subject had access to status and whether or not we can use the term agency in the context of her self-representation. What role did she play in commissioning the portrait and what was her relationship with the artist? What can we learn from this work where we presume the subject is a willing participant in her representation without being exploited or exoticized, bearing in mind that this portrait is “the exception not the rule”?

The lady in the portrait holds a flowering sprig in her right hand. How do we know it’s an orange blossom? We ask Deborah Metsger, Assistant Curator of Botany at the Royal Ontario Museum to help us definitively identify the plant. We learn about where and how orange trees grew in the eighteenth century and who might have owned a potted specimen like the one shown in the painting. There’s a long tradition of portraits of women holding flowers in European art. We discuss the potential symbolism of the orange blossom and the curious lack of orange fruit in this portrait.

British opera singer Peter Brathwaite has spent much of his COVID-19 quarantine researching and recreating historical depictions of Black people in art. To date, he has completed more than 80 portraits honouring a wide range of subjects, from the ancient West African king of gold, Mansa Musa, to the leader of the Haitian Revolution, Toussaint Louverture. The success of Brathwaite’s re-enactments have helped bring attention to the presence of Black subjects in historical portraiture, while allowing him to explore and pay homage to his ancestry. AGO Curator Adam Levine discusses the celebrated project with Brathwaite and the power of such paintings, including our own Portrait of a Lady Holding an Orange Blossom.