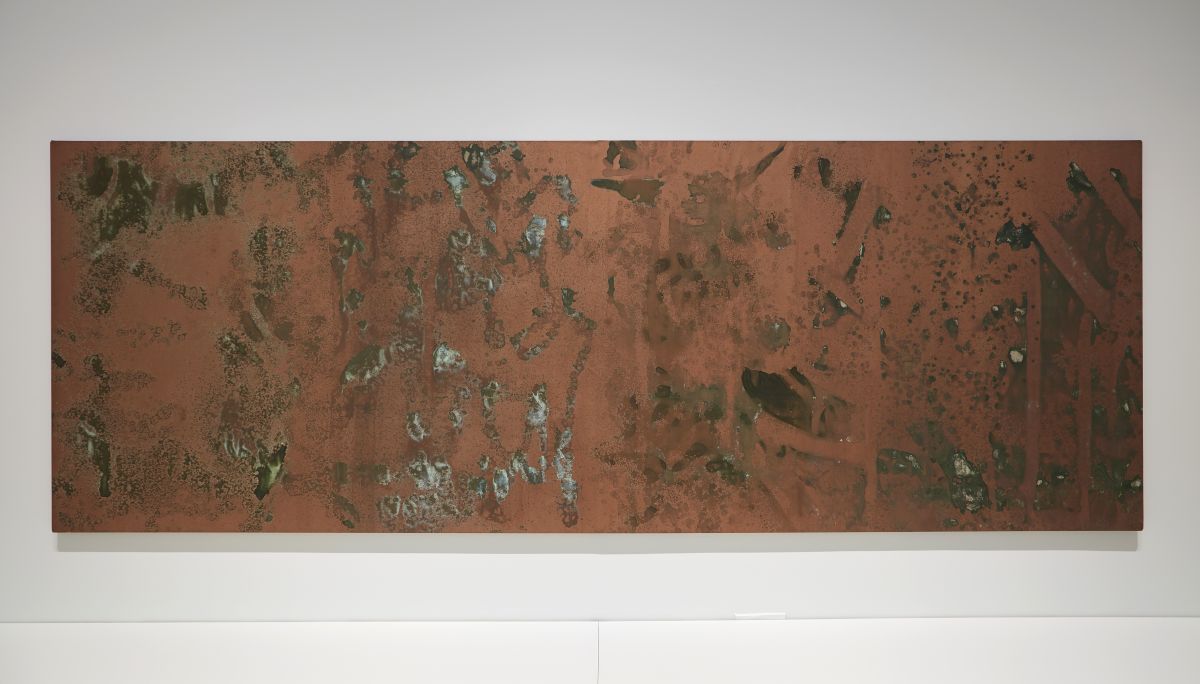 There’s no polite way to say it—in the late 1970s, Andy Warhol made a series of paintings using urine. A painting selected from the 1978 Oxidation series (image above)—better known as “piss paintings”—is on view now at the AGO, featured in Warhol’s career retrospective exhibition until October 24.

Always one to toy with controversy and humour, Warhol’s process behind making these works is as straightforward as one might expect. For the paintings in the Oxidation series, he and his studio assistants poured their urine (or urinated) directly onto mural-sized canvases, painted with copper-mixed paint and laid out on the floor. Visitors to The Factory were invited to contribute too while observing the spectacle of creating such works. The resulting effect was abstract “blooms” of green, yellow and orange tones created through oxidation, the chemical reaction between the urine and the metal-infused paint. Warhol, allegedly, went as far as to instruct one of his assistants, Ronnie Cutrone, not to urinate in the morning when he woke up at home and to wait until he arrived at the studio. Cutrone’s urine created a “pretty” colour on the canvas because of his regular vitamin B intake, Warhol wrote in a 1977 diary entry. Said to have experimented with the concept of a “piss painting” as far back as the early ‘60s, Warhol developed a technique to create these works, ensuring the paintings would have the desired outcome he was looking for.

The Oxidation series enters the Warhol oeuvre at a moment of change. Beginning around 1977, he shifted his practice away from the screenprints and photo-based works he is most associated with and towards experimentation and abstraction. The Oxidation series works as an example of this departure, along with two additional series involving bodily fluids: Piss Paintings, urinating or pouring urine on primed canvases (no metallic paint), and Cum Paintings, semen ejaculated or poured on primed canvases. Bob Colacello, writer and close friend to Warhol, once described the Oxidation series as a parody of Jackson Pollock’s drip technique, saying that Warhol liked to make art historical references in his work. Pollock, art provocateur in his own right who achieved fame in the 1950s as Warhol arrived in New York, is rumoured to have urinated on paintings commissioned by clients he didn’t care for and in Peggy Guggenheim’s fireplace. It’s unclear whether Warhol’s parody was served with reverence or critique.

Andy Warhol is on view at the AGO only until October 24. Buy your tickets now and don’t miss your chance to see this blockbuster exhibition.