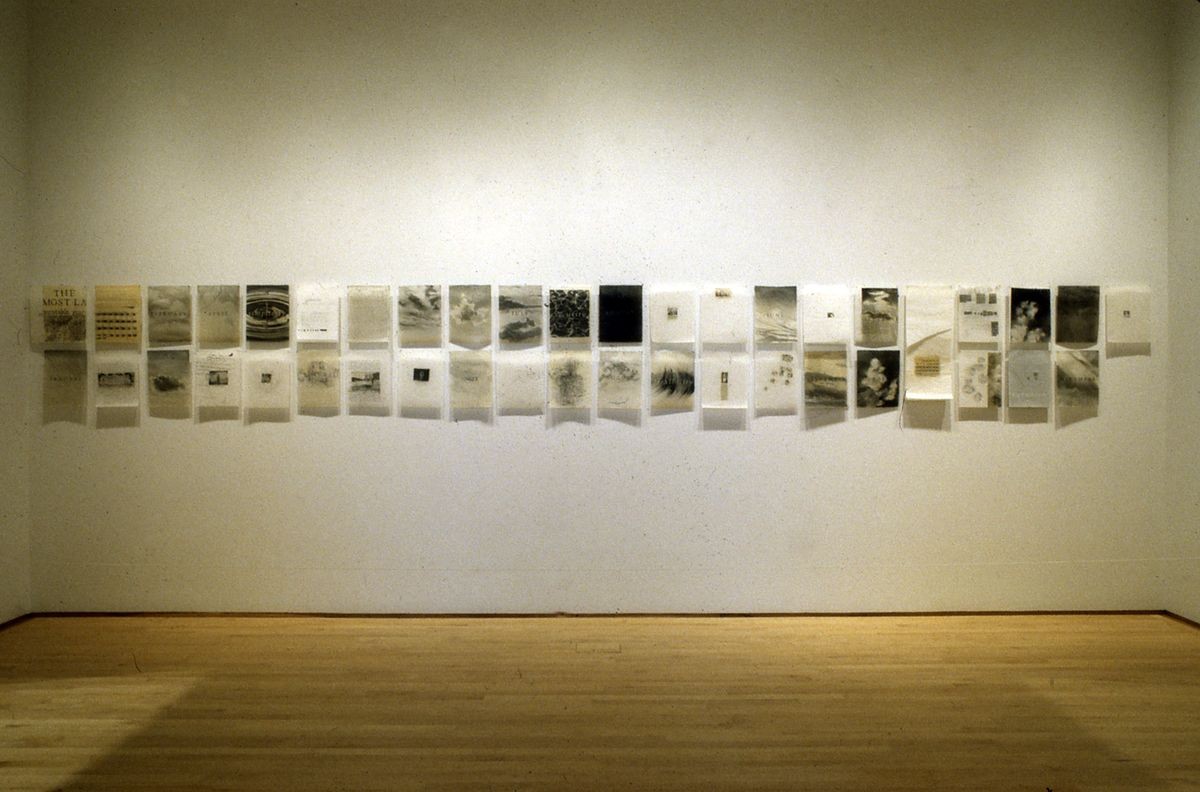 Stephen Andrews. Album, 1995. Graphite and oil stick, with chalk and coloured pencil on translucent paper, Each of 42 sheets: 30 x 23 cm. Purchased with financial support of the Canada Council for the Arts, Acquisition Assistance program and Salah Bachir, 1996. © Stephen Andrews. 96/8.1-.42

Canadian contemporary artists Stephen Andrews and Andy Fabo have been friends for 30-plus years. The two shared a Toronto studio space in the late 1980s, along with Fabo’s late partner Michael Balser, closely witnessing the evolution of each other’s art practice. Their bonds and shared experiences run much deeper than the art world: they both survived the AIDS pandemic of the 1980s and ‘90s, after contracting HIV and tragically losing their respective partners to the disease.

At the time of its onset – and still today – the illness disproportionately affected the 2SLGBTQIA+ community, carrying with it an immense amount of injustice and social stigma rooted in homophobia.  During this moment of crisis, many artists used their voice to boldly address what was happening – Andrews and Fabo are two of those artists. In his poetic journal, Album, Andrews memorializes his former partner Alex Wilson, who died of AIDS-related illness in 1993, by narrating the final year of Wilson’s life. In their video-based work, Survival of the Delirious, Fabo and Michael Balser include thematic and aesthetic references to delirium, a symptom experienced by many of those who contracted the disease before antiretroviral treatments were developed. Both of these moving and impactful works are part of the AGO exhibition Blurred Boundaries, on view now until September 2022.

We recently connected with Andrews and Fabo to get more insight about these two works and the events surrounding them, and to learn more about their friendship and reverence for each other’s art.

AGOinsider: Album is such a beautifully crafted and deeply personal chronology. How, if at all, has your view of this work evolved since creating it in 1995?

Andrews: Album is a chronicle of the year following the death of my partner, Alex. Even if mourning is a solitary journey, it is something that we all will at some point share. The whys and the wherefores of the loss don’t change the communal experience. The stages of grief unspool in their own sweet time for everyone. This piece traces the first year of that process. The thing about grief is that it never goes away. I still wear his ring, which reminds me daily of the past’s bittersweet echoes.

AGOinsider: Can you share some of your thoughts about Andy and Michael’s Survival of the Delirious, and its qualities that resonate with you most?

Andrews: Andy, Michael and I shared Jack Bush’s old studio on Wolseley Street back in the 1980s and ‘90s, so I had a front row seat on the making of the Survival of the Delirious. I remember the debates at the time about the efficacy of AZT [a type of anti-HIV drug] and the poignant moment when Wayne breaks the fourth wall to address the problem of the drug as a magic bullet. Also, I hadn’t seen the video in a number of years and was pleasantly surprised to see the shots of Alex and my house on Stafford Street. I had completely forgotten those scenes.

AGOinsider: Thinking back to the 1988 creation of Survival of the Delirious with the late Michael Balser, can you share what your collaborative process was like, and what you set out to achieve making the work?

Fabo:  Both Michael and I had worked on significant collaborative projects before we became a couple in 1987, so working together unfolded naturally as part of our relationship. The AIDS crisis was all enveloping for gay men at that point, both of us were HIV+ and both of us had lost dear friends and lovers to the disease, so the pandemic was an obvious subject for our collaborations.

AIDS was ignored by mainstream media and politicians because it first appeared in marginalized populations like gay men, Haitians and Latinos. Due to this indifference, it was left to the grassroots cultural sphere – video artists, visual artists, novelists, essayists and playwrights – to keep AIDS in the public eye. This was particularly true in the first two decades of the pandemic. Both Michael and I did some information-based work individually, but we opted to reflect the emotional and subjective landscape of the crisis in our mutual projects.

AGOinsider: Can you share some of your thoughts about Stephen’s Album, and its qualities that resonate with you most?

Fabo: Stephen and I shared a studio from about 1988 to 1991 and I witnessed the making of Facsimile, a crucial work in the history of artists’ response to AIDS. The series of intimate drawings that make up Album was created when he was sharing a studio with Rob Flack, so I didn’t see its evolution firsthand, but my experience gave me immediate insight into its intent.

Album was a memorial to his lover, Alex Wilson, a passionate writer and cultural theorist who led the cultural section of the pioneering LGBTQ newspaper, The Body Politic. In fact, Alex recruited me to be one of the writers, along with Martha Fleming, Sue Golding and Jon Kaplan.

AIDS made me realize that there is an unexpected aesthetic quality to loss, grieving, yearning that, for example, permeates Romantic art. An aesthetic rendering isn’t a superficial response that some think it is, but a means of declaring the value and significance of the lives lost. The inherent beauty of Stephen’s series is a manifestation of both Alex’s spirit and their loving relationship.

AGOinsider: Since the arrival of COVID-19 in 2020, many have drawn comparisons between our current pandemic and the AIDS crisis of the 1980s – mostly referencing the differences in government/social response due to stigma and homophobia. What are your thoughts about the juxtaposition of these two health crises?

Andrews: People were dying for fifteen years before they came up with the ‘Cocktail’. Governments were very slow to respond and seemed to not care for the first number of years so there’s the big difference. To date 36 million people have died of HIV/AIDS. Worldwide. Stigma still exists today even within the community. When you look at the hook-up apps and ‘Clean’ is one of the adjectives that people use to describe what they are and what they are looking for, so it gives you a sense of how much work needs to be done.

Fabo: Pandemics, viruses, disease are always political, and the appearance of a novel virus creates its own kind of chaos and uncertainty. There were HIV deniers in the early years of AIDS and there were certainly outlandish conspiracy theories too, but social media intensified the misinformation for COVID-19. Gay men were scapegoated for AIDS in the manner that Asians have been for the current pandemic. This stigmatizing probably was more pervasive and powerful with AIDS because it challenged the sexual mores of the larger population.

Don’t miss Blurred Boundaries, on view now until September 2022 at the AGO. Subscribe to the AGOinsider for more stories and art news, delivered each week to your inbox.