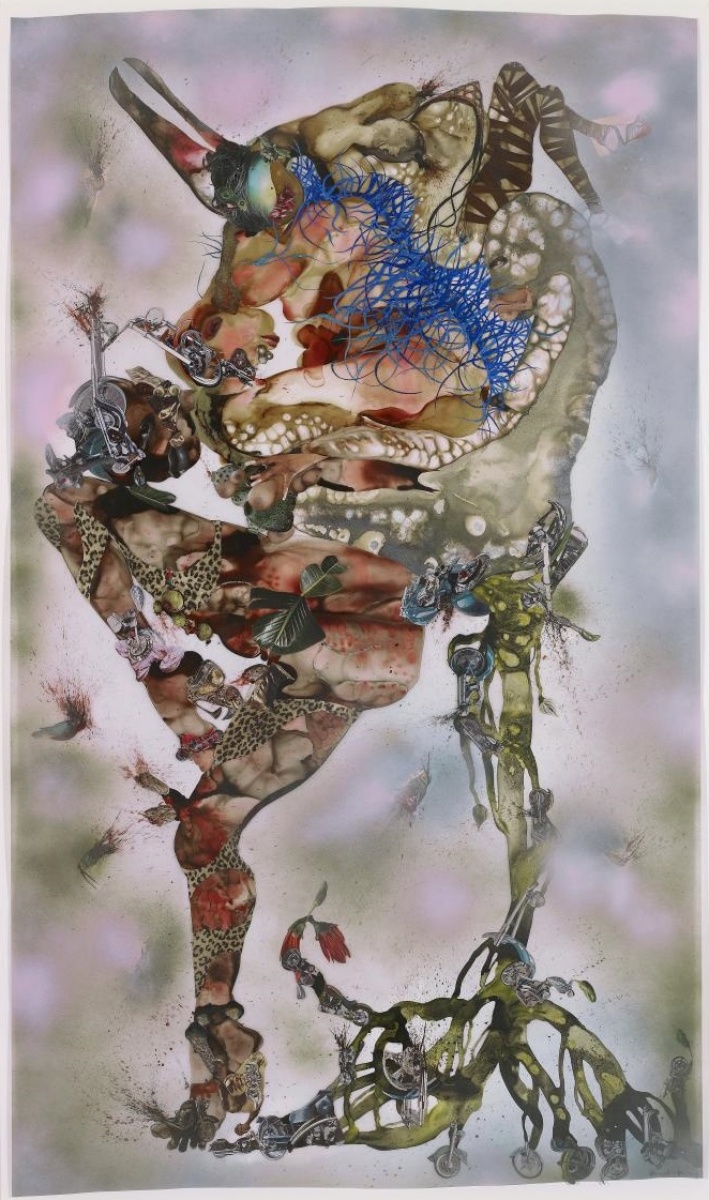 Kenyan-American Wangechi Mutu is a globally recognized contemporary artist. Widely known for her collage-based works on Mylar and large-scale installations, Mutu also works across other media, including painting, drawing, sculpture and video. Born in 1972, she was raised in the suburbs of Nairobi, Kenya, later studying in both Wales at the United World College of the Atlantic and the U.S. at The Cooper Union and Yale University. Her work has since been included in the permanent collections of many notable art museums, including The Museum of Modern Art, New York; The Whitney Museum of American Art; and The Museum of Contemporary Art, Los Angeles. Over the past 20 years, she has mounted several solo and group exhibitions. In 2009, Wangechi Mutu: This You Call Civilization? at the AGO was the first major exhibition of Mutu’s work in a North American art museum and it featured 16 key works including collages on Mylar, videos and installation. Her representations of the human form were described at the time as “disturbing and transfixing, at once utterly complex and strikingly direct.”

Race, gender, consumerism and post-colonial discourse frame Mutu’s work. Both repellant and enticing, her works are imbued with the complexities of gender and cultural identity and they demand a visceral response from her viewers. Beauty and violence clash against each other creating a visual dialogue that is intentionally provocative and unresolved. Through her work, she often speaks to her Kenyan upbringing and maneuvering through contemporary Western society as a Black woman. The Black female body, in particular, appears in Mutu’s work in various forms, confronting both the male and the colonial gaze. She unapologetically questions the objectification, hypersexualization and violation of Black women in Western society. Speaking in the 2010 video below, Mutu explained that “the fiction of the hypersexualized Black female that you see a lot more in the media in the West, [...| perpetuates the idea that that’s who a Black woman is and can only be in this society. Either the traditional African woman [...] or this other woman who is a pin-up. A vile, erotic, hypersexualized pin-up.”

Created specifically for the opening of Transformation AGO in 2009, This You Call Civilization? (2008), with its washes of watercolour, intricately placed magazine clippings and granular elements (like soil and glitter), creates an animalistic abstraction of the human form. Mutu strikes an unsettling balance between the beautiful and the grotesque—the long-legged, leopard-clad figure captures a hybridization between animal, human and machine. As if to allude to the piecing together of one’s cultural and racial identity, Mutu masterfully collages together magazine cuttings including lips, eyes, motorcycle wheels, manicured hands, feathers, leaves, high-heeled shoes and fruit. At first glance, it looks like one single figure, but with closer inspection, it contains multiple figures with at least three different heads, two pairs of legs and flailing arms superimposed on top of one another. Green roots cascade down to the ground in place of legs and feet. The figure looks to be in motion as if it’s about to leap off its Mylar surface and transform into a celestial three-dimensional being.

Watch this 2010 video in which Mutu discusses the creative process behind This You Call Civilization? and the thematic complexities in her work: