Founded in 1925, the Grosvenor School of Modern Art in London, England, was a leading force in the development of modern printmaking. Most notably, it was a centre for the production of linocuts, with the influential instructor and artist Claude Flight as the biggest proponent of this new technique. This was “art of the people,” he said, perfect for an era enthralled by the fast pace of modern life and socialist ideals. Together with Flight, women artists Sybil Andrews, Lill Tschudi, Dorrit Black and other fellow students were all encouraged to take up the colour linocut technique.

So what is a linocut? It is a printmaking technique in which designs are carved into a sheet of linoleum. Like a stamp, the sheet is then inked and pressed onto paper or fabric to produce an image. A durable, mass produced floor covering composed of linseed oil, sawdust and cork dust, linoleum was invented in Britain in the late 19th century. Quickly gaining popularity as an art medium, it was admired for its ability to take pigment and its pliableness. It gained a reputation as a readily available and inexpensive material, and artists began using it as early as 1912. Unlike other printmaking techniques, the linocut process had no historical precedents, lending the technique a certain democratic air. Flight believed that linoleum was well suited to colour printing and thereby making multiple images that could reach mass audiences.

You can find Flight’s most famous colour linocut print Brooklands, Motor Racing (1929) in the AGO Collection. By using bright colours and simple patterning, he created a dynamic scene ofmotor racing and captured the essence of a popular and fashionable sporting pastime.

One of Flight’s young students was Sybil Andrews. Born in the United Kingdom, but without means to afford art school, Andrews worked as a welder during the First World War, and became the secretary of the Grosvenor School in 1925. Her earnings enabled her to take courses at the school, and Flight introduced her to the techniques that would define her artistic career. Andrews moved to British Columbia in 1947 and continued to make linocuts and teach printmaking until her death at age 94. Having spent nearly half her life in Canada, Andrews is often claimed as a “Canadian” artist.

Racing (1934) is one of Andrews’ most famous prints. Her concern was to summarize the inherent rhythms and movement of subjects. She captures the spirit of the movement of both the riders and the horses by means of bold, simplified, formal elements – shapes, colours, patterns - derived from art deco geometrical forms. 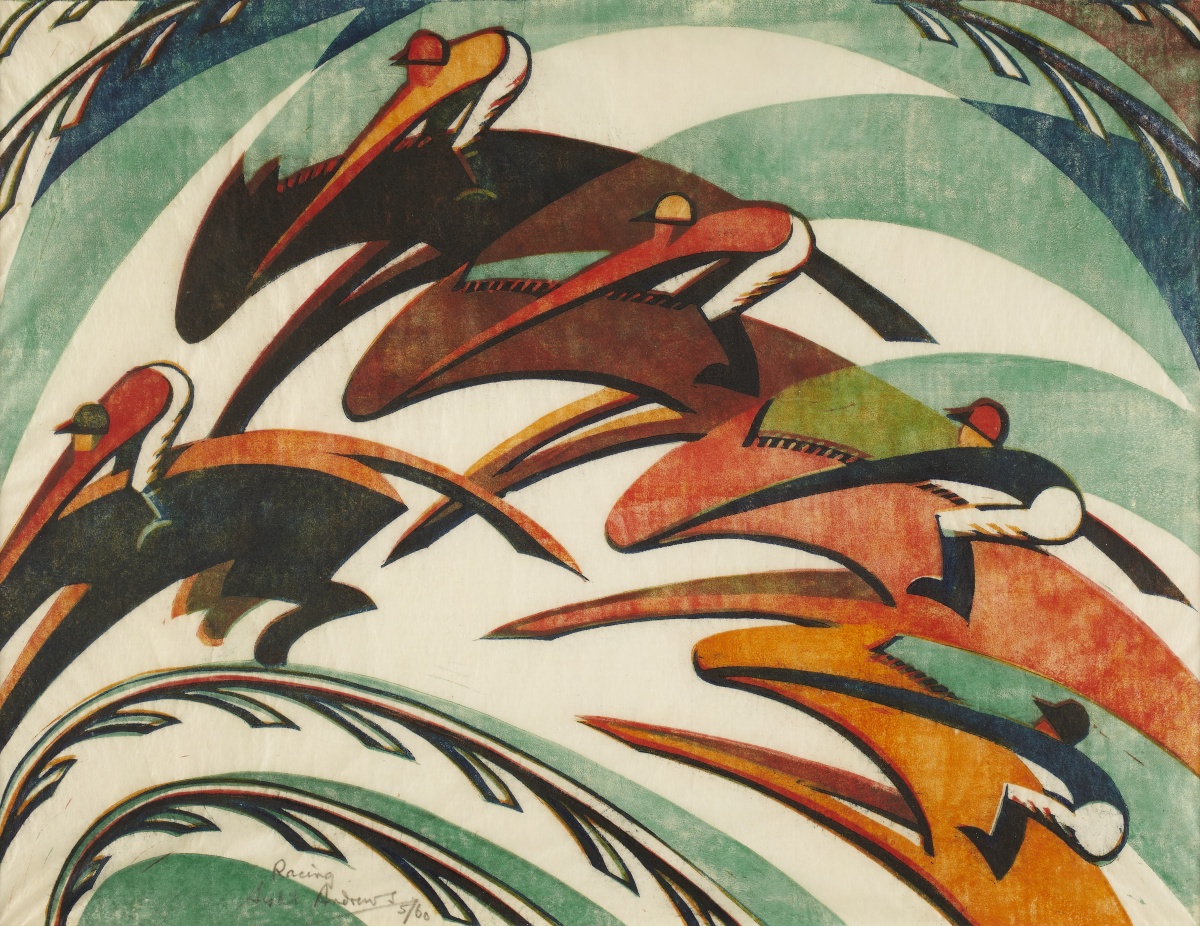 This work is included in the AGO’s focused installation Grosvenor School Linocuts, set to go on view once the Gallery reopens. Curated by Brenda Rix, Manager,AGO Print & Drawing Study Centre, this exhibition is devoted to the works of the women of the Grosvenor School: British-Canadian artist Sybil Andrews, Swiss artist Lill Tschudi and Australian artist Dorrit Black.