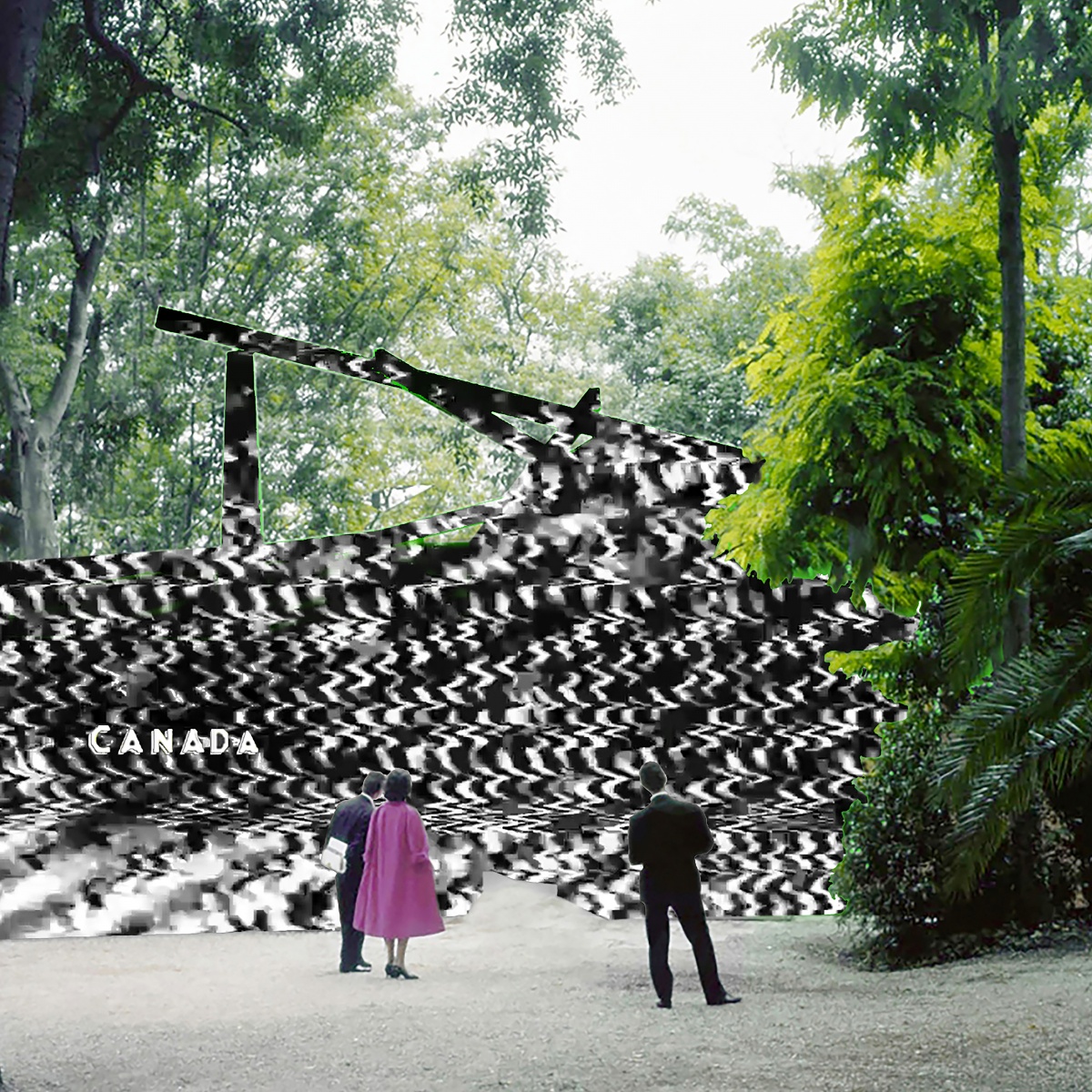 The Canada Pavilion at the International Architecture Exhibition in Venice has once again come alive, but this time, it’s hidden in plain sight. With sharply defined angles with and a tree in its centre, the original 1950s architecture has been all but erased. It's now wrapped tightly in green screen material, but with the help of an app, visitors to the site can conjure another famous Canadian building in its place – a cinematic quick change, the likes of which Hollywood has been doing for years. Entitled Impostor Cities, and presented by a team led by McGill professor David Theodore and Montreal architects Thomas Balaban and Jennifer Thorogood of T B A, this acclaimed installation onsite and online reveals just how famous Canadian architecture is on screen.

Inside the Pavilion, in a custom screening room, visitors can see footage from over 3,000 films and television shows, featuring iconic Canadian buildings and streetscapes such as Erickson-Massey’s Academic Quadrangle at Simon Fraser University, Pomphrey’s R.C. Harris Water Treatment Plant, Kingston’s Market Square, Winnipeg’s Exchange District and the Lakeview Restaurant in Toronto – all in their many disguises.

We reached out to Theodore, Balaban and Thorogood to understand more about how they created their own impostor building and what led them to consider architecture on film.

AGOinsider: What led you to consider cinematic architecture as a subject?

ALL: Cinema has lots to tell us about the world we live in. The filmmakers we interviewed for the exhibition stressed the importance of storytelling, but it goes deeper than that. Doors and windows let light into our world, but so do movie screens.

AGOinsider: The Canada Pavilion in Venice is a unique structure. How did the existing architecture impact your creative process?

ALL: The team fell in love with the building and its strange history. The Canada Pavilion became an integral part of our project, and its unique shape influenced the design of the exhibition in a couple of ways. Wrapping the structure in a green fabric permitted us to digitally erase and replace the Pavilion with Canadian Impostor buildings—and also to draw attention to its distinct profile. The faceted Nautilus plan and folded glass walls also informed the angular layout of the projection screens at the heart of the exhibition.

AGOinsider: To create this experience, the team wrapped the entire Pavilion in green screen material. Did you have any qualms about obscuring the original 1950s architecture, creating an impostor of your own?

ALL: Absolutely not.  Sometimes you have to hide something to make people take notice and want to see it.

AGOinsider: Inside the Pavilion, visitors can see clips handpicked from more than 3,000 films and television shows. What did the research for this involve? Were you able to identify the first time Canada was an impostor on film?

ALL: We obviously started with quite a few movies in memory just from our own interests in the subject.   And luckily for us, there is a global fascination with films and filming so a great deal of information is readily available online. We quickly started to build an extensive list of films shot in Canada. From there it took many months to identify the buildings, streets and landscapes appearing in each scene.

We cannot absolutely say it features the first impostor, but the oldest film in our database is The Two Orphans, a 1915 American film set in Paris and partially shot in Quebec. Quite a few cases of early impostering came from the British-imposed Cinematograph Films Act of 1927, put into place to ensure that a certain percentage of films were produced in Commonwealth countries. The resulting series of low-budget films became known as “quota quickies.”  Here we see transparent, unapologetic impostering such as Victoria, BC, standing in for Manhattan, NY.

AGOinsider: Are there any commonalities amongst the buildings that get used as impostors?

ALL: Within our research we identified some heavy hitters that we refer to as the Impostor Buildings. We have many clips of Toronto’s Lakeview Restaurant (1932), for instance, playing a classic diner. Its real and fictional functions align. University of Toronto Scarborough (John Andrews, 1963) and Simon Fraser University (Arthur Erikson and Geoffrey Massey, 1965), both Brutalist buildings, play evil tech corporations and nefarious science labs.  Another favourite is the R.C. Harris Water Treatment Plant (Thomas Canfield Pomphrey, 1932-41). It has a penchant for playing prisons and psychiatric hospitals.

It’s hard to think of something they all have in common. They do tend to play to visual stereotypes in a way that character actors fill certain roles. Alfred Hitchcock claimed that film is life with all the dull bits taken out. Something always goes down in an impostor building!

AGOinsider: In order to prepare, I understand you built prototypes of the interior screening room. What did that teach you?

ALL: We built several prototypes of the Screening Room to design and tweak our site-specific four-channel video installation. One of them fits on a tabletop; a second one is a 3-D digital model inside video game software; a third, made from medium-density fibreboard, is about 1/4 scale of the actual screening room’s three-metre-high walls. That one you can walk into and get a good sense of what it’s like to stand inside a film. It's very different from watching movies on a TV screen or iPhone—or on those small screens on the back of airplane seats.

If filmmakers turn our cities into movies, we wanted to turn films back into buildings. We used the prototypes to make vivid the ways we understand architecture through seeing it on screen. For instance, we discovered through prototypes that folding the screens to play with the Pavilion’s odd geometry helped. It’s startling and engaging to watch films turn the corner, like we do when walking through the city.

We also used prototypes to test which clips from which movies had the most punch. The team collaborated closely, and the prototypes allowed for communal deliberation about the details and the overall impact of the moving image. The models helped us all understand colours, lighting effects, camera movements and visual juxtapositions.

AGOinsider: Postponed once by COVID, the theme of the Biennale (but not the Pavilion) is “how we will live together in a shared future.”  What do you think COVID taught us about living together?

ALL: The Canada Council for the Arts chose us to represent Canada before the theme of the Biennale was announced. But we believe strongly in cinematic fictions as expansive worlds we live in together, so there’s a natural fit between Impostor Cities and the will to imagine our collective futures.

Once the pandemic hit, the importance of experiencing the world on screen intensified. At the start of lockdown, both cinema-going and cities seemed threatening, sources of contagion and fear. But we soon realized that shared cinematic experiences helped stitch our lives together—even if it was just sharing Netflix playlists. Lockdown made us all assess how much cinema had moved out of the multiplex theatre and into our everyday lives.

COVID prompts us to really think about how movies and buildings go together.  We can all dream of the future of our own cities based on the films we watch together onscreen. Still, it’s too early to talk about lessons from COVID. It’s a pandemic, so it’s tough to know if we are at the end of the beginning or the beginning of the end. Looking back, the Biennale might seem to our future selves to have been a folly, an international exhibition held at exactly the wrong moment, or an optimistic first step in our regeneration.

AGOinsider: Finally, do you have a favourite impostor building?

ALL: Our favourite might be Roy Thomson Hall in Toronto (Arthur Erickson/Mathers and Haldenby, 1982)—because it shouldn’t be an impostor.