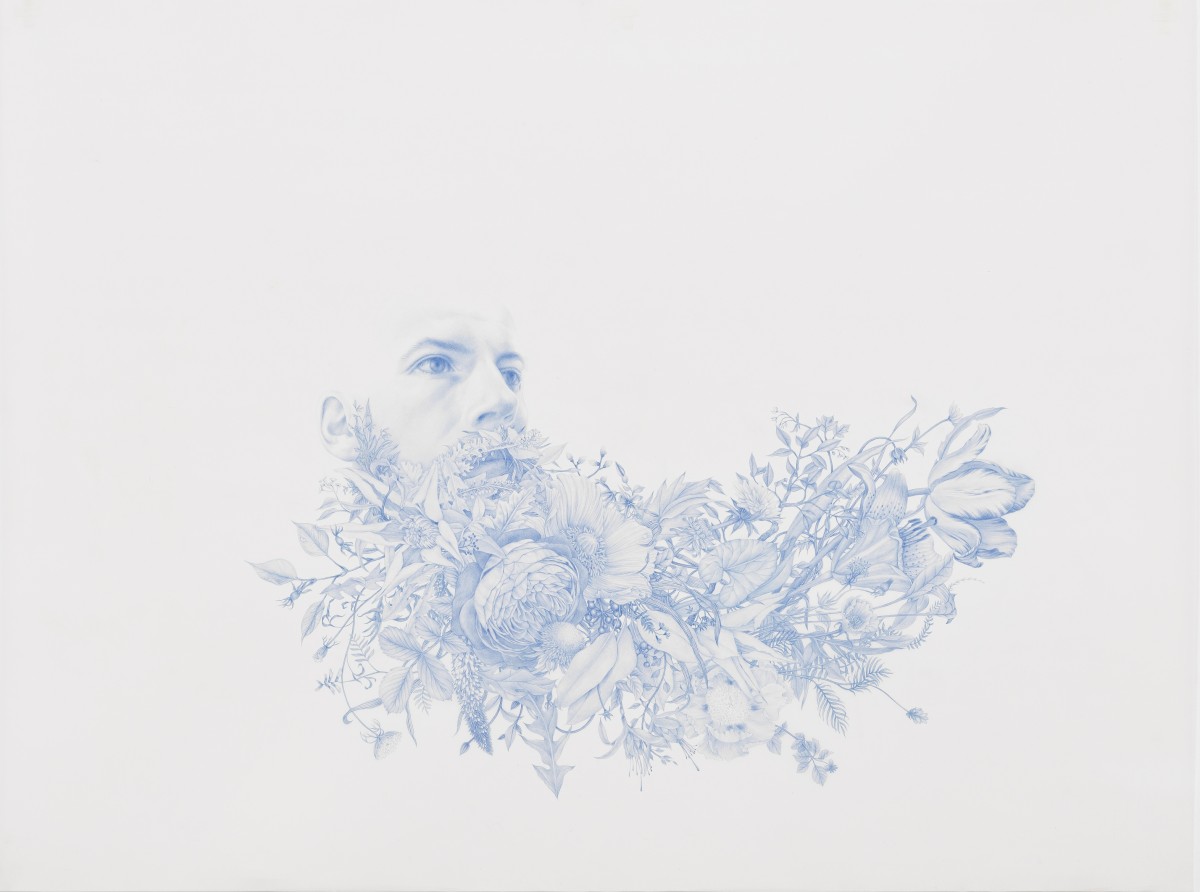 Canadian contemporary artist Zachari Logan often draws self-portraits. In them, his body blends with intricately detailed botanical elements, creating a hybrid form best described as a queer embodiment of nature. Remembrance, his new solo exhibition at the Peabody Essex Museum in Salem, Massachusetts, invites visitors to reflect on the power of loss and the healing potential of grief. Additionally, Logan’s blue pencil drawing, Wild Man 13, Flora, is currently on view as part of the AGO exhibition Blurred Boundaries: Queer Visions in Canadian Art.

Originally from Saskatoon, Saskatchewan, Zachari Logan works mainly in drawing, ceramics and installation art. Through his practice, Logan explores the intersections among masculinity, identity, memory and place.  His work has been exhibited widely, in group and solo exhibitions throughout North America, Europe and Asia. Logan is most recognized for his large-scale, colourful pastel drawings that depict a spectrum of botanical elements (flowers, shrubbery, fruits and vegetables) as well as various wildlife, blended into alignment with his own body or face. Additionally, he creates unicolour iterations of this style of work using blue or red pencil only – which is the case in his work Wild Man 13, Flora.

Part of his Natural Drag series, in which Logan creates fantastical versions of himself, Wild Man 13, Flora draws on queer notions of kinship, extending past botanical links and enhancing the connection between humans and nature. Described by Logan as queer renderings of his body, this series is inspired by the archetype of the reclusive wild man, who Logan perceives as a personification of nature. In his view, these works “present the human as an integrated part of the landscape, not above it, simply one aspect of it.”

On view at the Peabody, Remembrance consists of works in both drawing and sculpture, and explores various stages of transformation. Featuring Logan’s trademark representations of flowers, leaves, branches and bodies, the exhibition – installed in the museum’s Jurrien Timmer Gallery, which is dedicated to contemplation and meditation – highlights the beauty in breakdown, as well as the brightness that can emerge from new growth.

Don’t miss Blurred Boundaries: Queer Visions in Canadian Art, on view now at the AGO until September 25. And if you are in Salem, Massachusetts, check out Zachari Logan’s solo exhibition, Remembrance, at the Peabody Essex Museum until May 2023.