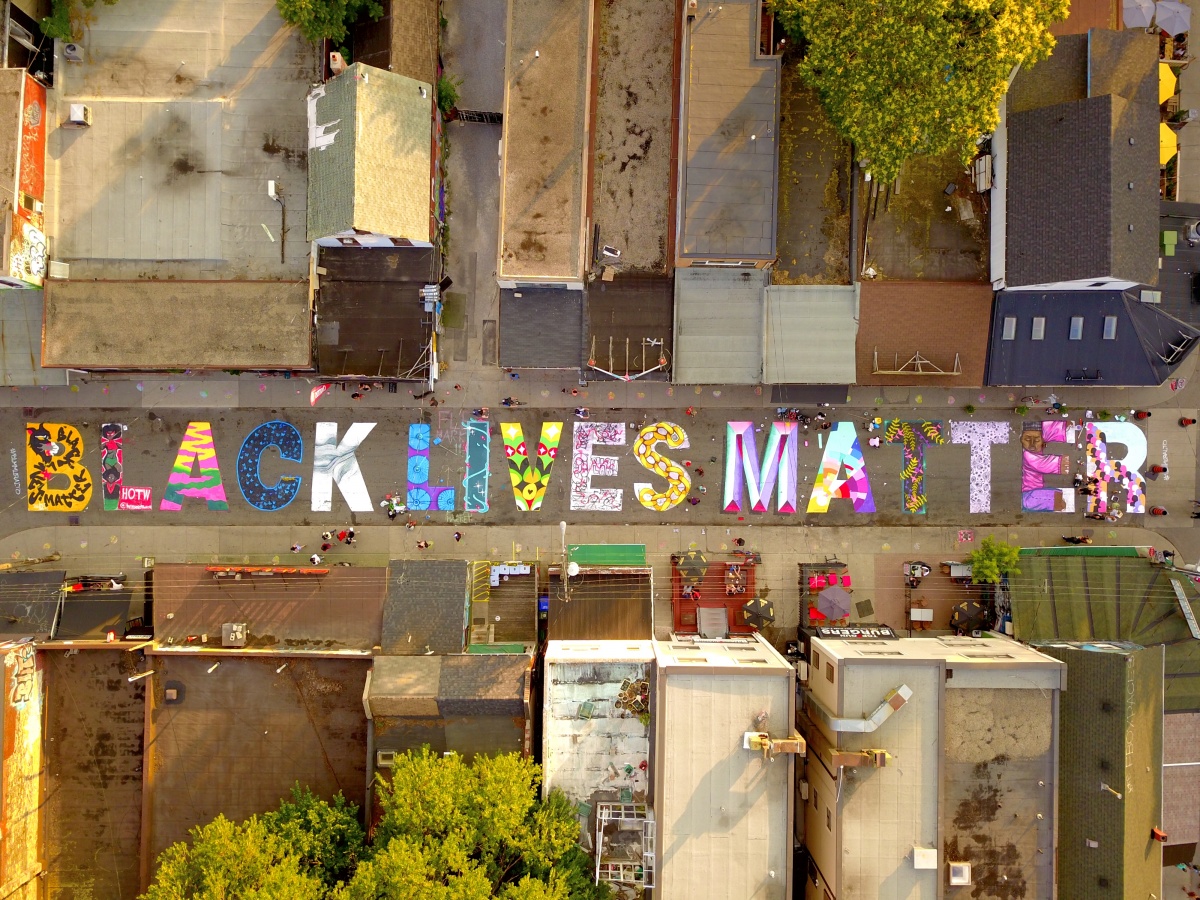 Last summer we witnessed one of the largest and most significant uprising for Black lives since the Civil Rights movement. Alongside the planning of marches and sit-ins, artistically inclined organizers were also busy contributing.

Worldwide, a growing trend of large murals and street paintings in support of the protests went viral on social media, inspiring artists everywhere to get involved - and Toronto was no exception. On June 5th, 2020 graffiti artists Jessy Pacho and Moises Frank organized Paint the City Black. The initiative mobilized Toronto’s graffiti community to repaint Queen West’s Graffiti Alley with new murals of prominent Black figures and messages of solidarity. Similarly, in Kensington Market, a collective of artists from various disciplines came together to paint the street, spelling Black Lives Matter in large block letters on Augusta Avenue. Each letter was created by a different individual artist, giving the piece a diverse, mosaic-like look. Check out the aerial video below:

We caught up with Yung Yemi, Toronto-based artist and an organizer of the Kensington Market street mural, to find out more about the inspiration and intention behind this project.

Insider: What inspired you and the rest of the collective to do this?

Yung Yemi: The project was conceived of as a solidarity movement in alignment with similar murals being painted across the US. The concept to have individual artists create each letter came from the CHOP region mural in Seattle. We felt a particular kinship with that movement given the nature and reputation of Kensington Market in Toronto as an artist stronghold.

Insider: How did such a large project come together logistically?

Yung Yemi: The project came together really quickly. The whole thing basically took about 8 days from idea to completion. I live and work in the market so I leveraged that to get in contact with the BIA for their support. And we leaned heavily on Javid Jah to petition city council and Toronto's Street Art program for permits (Javid is an OG graffiti artist and also an architect so he has extensive experience dealing with permits and guidelines at the city level). Without his support on this project it definitely would not have been able to come together in the time frame that it did.

Insider: What message do you hope the mural conveys to (and about) the city of Toronto?

Yung Yemi: First and foremost we wanted to give the Black community in Toronto a protest mural that aligned with this city's identity. Something to invoke pride and show solidarity with the global movement. On an artistic level it's important for people to understand that this entire project was organized and funded by the artists themselves. We received absolutely no funding/support for this, all we got is the 'permission' to do it. In that sense we wanted to show that there is a community of Black artists in this city that is highly skilled, and entirely mobilized. The fact that we are so often omitted from the city's creative institutions is not at all a reflection of merit, it's a reflection of the inherent systemic barriers that we face as Black artists. But we just want the community at large to understand that we are out here and we will continue to do cool shit with or without the support of the larger creative community in Toronto.