The massive importance of Indigenous art extends much further than the walls of any gallery. Over centuries of Canada’s colonial history, Indigenous communities have resisted cultural erasure, partially by maintaining sacred, traditional art forms. For established muralist Philip Cote, amplifying the legacy of his ancestors through public art is both a spiritual and political act.

A member of Moose Deer Point First Nation, multidisciplinary artist, sun dancer and historian, Philip Cote has been painting large scale murals throughout the GTA for the better part of two decades. Created through the lens of traditional Anishinaabe storytelling, his striking murals are marked by their vibrant display of colour and depiction of multiple characters – and realms – involved in an intricate narrative. In a historic project Cote just completed with the Toronto Transit Commission, for the month of June five streetcars will be wrapped with a visual Indigenous Land Acknowledgement he designed. From Cote’s perspective, each of his public works are a reclamation of land and a beacon of truth that connect back to pre-colonial Turtle Island.

We recently spoke with Cote, who graciously shared insights into his practice and the infinite legacy it carries. 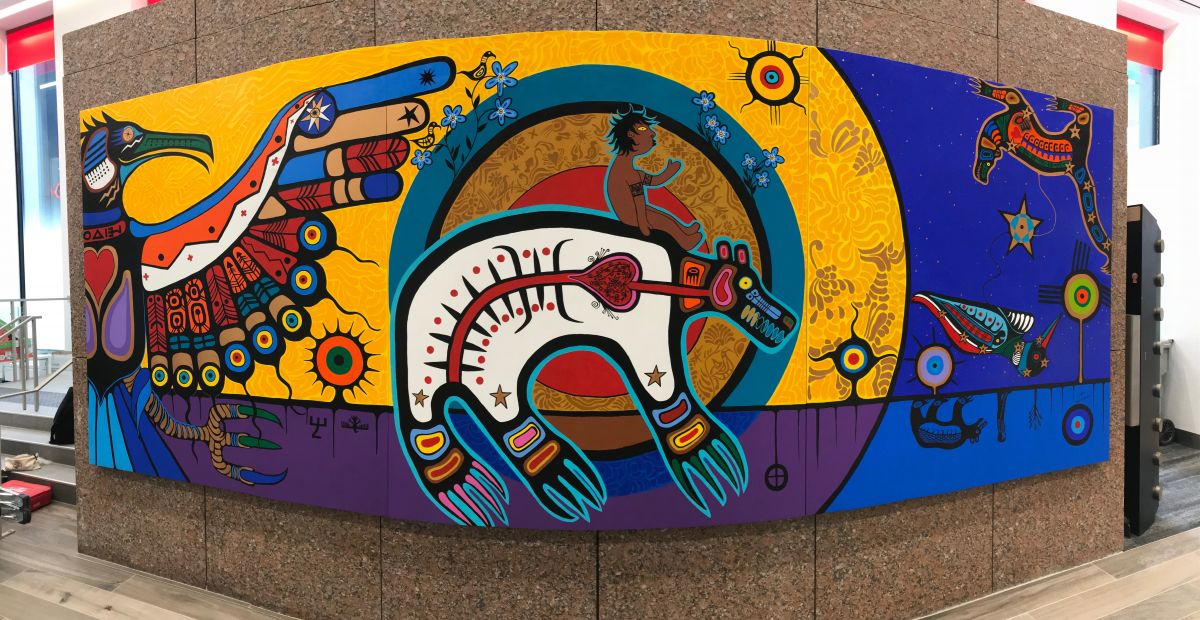 AGOinsider: All of your murals feature multiple figures, a wide range of vibrant colours and titles that carry sacred and complex meanings (like “Sacred Teaching of Seven Grandfathers”or “The Original Family”). Can you share some of your process for planning the concept of a piece?

Cote:  First of all we need to start with the practice of oral histories because this is the foundation of my visual artwork. The concepts of these works start with the tradition of oral storytelling and from there we go through the ways in which our ancestors created mnemonic devices to help them remember our ancient history painted on birch bark scrolls. The birch bark scrolls are the birthplace of Woodland Art. Depicting the cosmology through symbols goes back even further, a very long way back to 10,000 years ago when pictographs were painted on pink granite rocks known as the Canadian shields in many locations across this nation. These pictographs were used to send messages into the future to many people who would one day find these images. And there were also petroglyph depictions of spirits carved onto the rocks. These ancient images were created by our ancestors and were visual messages being sent to us to our present time. The Indigenous populations who lost their identity are now having to rely on blood memory through images of these kinds and practicing ancient rituals that connect with those ancestors lying dormant in our DNA.

AGOinsider: You are also an accomplished lecturer, instructor and historian. From an educational perspective, what do you hope people learn when they encounter one of your pieces?

Cote: I hope to bring understanding of our culture and history and cosmology to the forefront to take its rightful place alongside the western culture adding to our many contributions that were silenced throughout this 500 years of colonization and breaking the barrier of a singular western narrative. We have come to a place where we stand in a post-Truth and Reconciliation Commission landscape and the sky's the limit. If I were to tell you what to call this time we would look back 1,200 years to a moment when those seven fires rose up out of the Atlantic Ocean and walked onto the shoreline telling our ancestors of all that was coming including your settler arrival. And after a long struggle, we arrive to the present day, the time of the Eighth Fire. The Eighth Fire is a time for the merging of our two cultures and in doing this ready ourselves for the new people that will be born from this union, taking these new shared ways into the future. 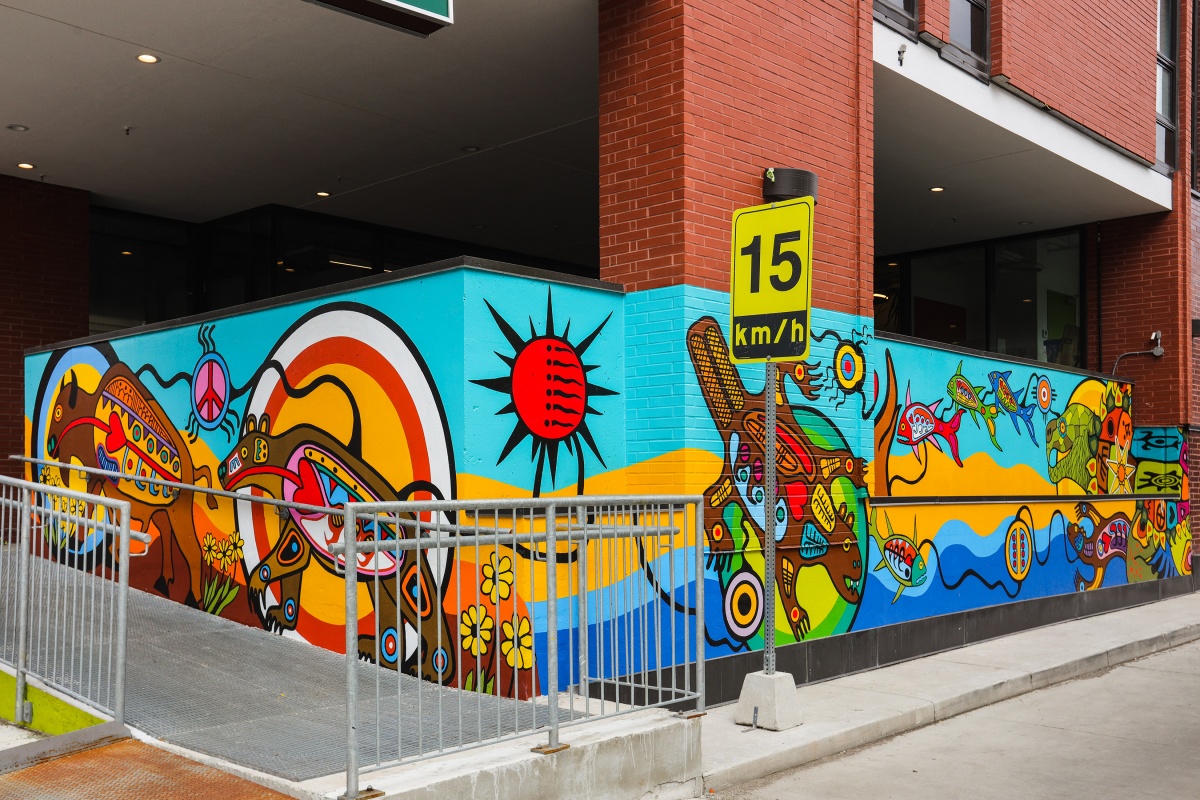 AGOinsider: If you could paint a mural on any surface in the world, where/what would it be and why?

Cote: This is a great invitation. I would have to say on a serious note the Vatican because it was at the heart of the place where the orders were given for our Indigenous lives to be worthless unless we could be indoctrinated or converted into Christianity. Christianity granted the settlers permission to take our lives because we were not considered humans but animals. Our rights to our lands and lives were stolen. There were words that were printed in some of these early bibles that stated If the Indians Could Not Be Converted And Could Not Be Saved, Settlers Were Given The Rights To Kill Them For They Were Only Animals, not Human. My murals speak of our Creation Stories so the settlers can now see that we were never animals, that our stories and history are just as valuable as theirs, and that we are needed in this time of great change.

AGOinsider: Given the colonial history of Canada, as an Indigenous artist who paints traditional imagery in public spaces, do you ever see your work as a political act or an act of resistance?

Cote: My murals are an act of resistance against colonialism. Most importantly, these creations are tools for the reclaiming of spaces, of land, of time, and of history. Each piece I create tells a story of this land. I am constantly digging and seeking to find the Truth, our Truth, and to convey these messages to my community. The ways in which I design my murals has to do with our cosmology. The Woodland Style has at its core a rendering of the beginning of the universe in a place where we see the Great Black Void by way of the painted black contours as it courses its way through the whole image like the framework of a skyscraper holding the bright colours that reference the seven grandfathers colours within its structure.

I must share The Anishinaabe Creation Story here so you understand where I am coming from:

In the beginning there was a Great Black Void and in that void there was a spirit, The Great Mystery, who sent his thoughts out into the Universe, when no response happened, those thoughts were called back and The Great Mystery said “Create light in The Universe as you come back to me.” At that moment all the stars were born and from them the planets were formed. We have light and dark in the Universe. The Anishinaabe people believe that we are all made of light and dark, the physical and the spirit.

All of the elements in my murals reflect Anishinaabe Cosmology and reference the birch bark scrolls and their symbolic imagery. These scrolls ask us to figure out their coded messages. When we decipher these messages, we begin to see that there are two worlds living side by side, the physical world and the spirit world, co-existing. And only now are we able to understand that this is a new way to look at the world, by seeing where woodland style of painting comes from the deep past