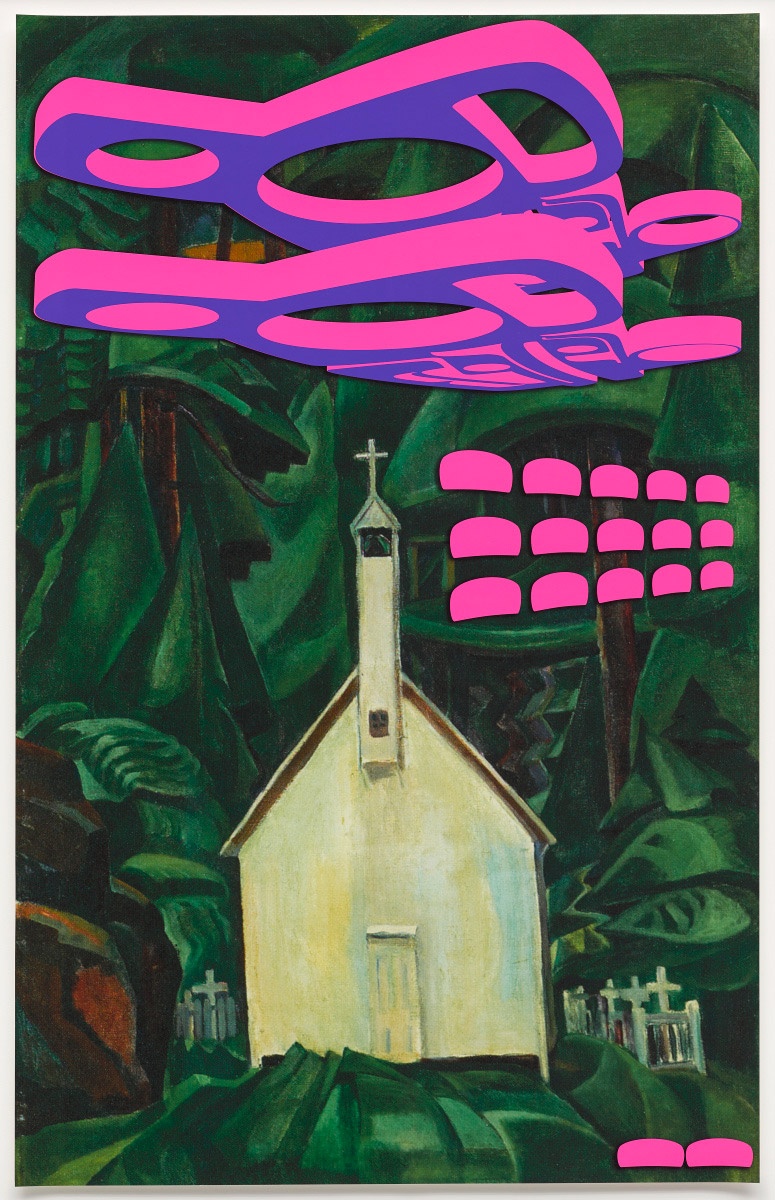 When faced with the bright neon pink and purple designs of artist Sonny Assu’s painting, Re-Invaders: Digital Intervention on an Emily Carr Painting (Indian Church, 1929), it may take a moment before you recognize that the famous painting that lies beneath these colourful designs is Emily Carr’s iconic work, Church In Yuquot Village (previously titled Indian Church). Assu’s work is part of his ongoing series called “Interventions on the Imaginary”, in which he overlays 3D Kwakwaka’wakw design elements over iconic Canadian landscape paintings, many by Emily Carr.

Raised in North Delta, a suburb of Vancouver, Assu currently lives in Liǥwilda'xw territory (Campbell River, BC) and uses both Western and Kwakwaka’wakw styles of artmaking to foster conversations around Indigenous issues. Re-Invaders: Digital Intervention on an Emily Carr Painting (Indian Church, 1929) is the first of work to join the AGO Collection.

We spoke with Assu to find out more about the "Interventions on the Imaginary" series and what keeps him inspired.

AGO: The “Interventions on the Imaginary” series features many Emily Carr works. Why is that?

AGO: Tell us about the creative process behind Re-Invaders: Digital Intervention on an Emily Carr Painting (Indian Church, 1929).

Assu: I found the church to be captivating. As a symbol of colonialism, it appears so desolate against the forest backdrop. Re-Invaders flips the narrative, speculating that Carr was actually capturing the settler's decline, in contrast with the perception that she was capturing the indigenous decline. Speculation, humour and sci-fi narratives all played a big part in the creative process for this series.

AGO: Can you tell us how you used humour in this series?

Assu: Humour has always been a big part of my practice. I use it as a catalyst for conversations, as a way to break the tension inherent to indigenous and colonial dialogues. With “Interventions on the Imaginary” I paired it with pop culture and social media references to foster a dialogue between Indigenous issues and Digital Natives (or Gen-Z). Re-Invaders, specifically, tapped into my generation (Gen-X) and Millennials, taking inspiration from Space Invaders, a late 70s video game prominent in my youth.

AGO: Why did you choose to work in a digital medium rather than a more traditional art medium?

Assu: I find working digitally as physical as working with paint. I’ve come up with a process in my digital practice, using Adobe Illustrator and Photoshop that satisfies my painterly hand. Although, when I work too long digitally and I go back to painting, mistakes aren’t as easily remedied as hitting Command-Z.

AGO: Can you tell us about some of your artistic influences?

Assu: Other than an amazing group of contemporaries, my love of comic books, sci-fi and both nostalgic and current pop aesthetics, my biggest influence has come about from me moving back to my home territory. I’m grounded here. My culture is from here, my family is here. I get to make art where my ancestors lived. I feel them, they guide me. That’s pretty inspirational and has influenced my practice deeply.

Re-Invaders: Digital Intervention on an Emily Carr Painting (Indian Church, 1929) is on view now on Level 1 in Fudger Rotunda, Gallery 126 and included in General Admission.