A twenty-foot-wide painting by one of the world’s most acclaimed artists is on view at the AGO for just a few more days. Santa Monica Boulevard (1978–80) by David Hockney is a not-to-be-missed highlight in I AM HERE: Home Movies and Everyday Masterpieces, open until August 14. Hockney captures a sun-drenched snapshot of the iconic West Hollywood street in Los Angeles, painting it with DayGlo-esque pinks, oranges and teals. At the AGO, the painting appears against a bright blue wall as a backdrop, making the colours pop even more. Some passages are rendered with crisp detail; others with thick impasto-like strokes. Parts of the painting appear slightly unfinished with thin sketched lines peeking through layers of acrylic paint. Placing viewers directly into the scene as if they were driving by in a car, Hockney transforms ‘the everyday’ and enlarges it to a monumental scale. People move about their day across the canvas, unaware of the viewer’s gaze – walking down the street purse in hand, leaning against a wall in a doorway. As Hockney has said about Los Angeles, “If you’re looking for a shop, there will be a big sign above the little building so you can recognize it at speed. The architecture is made to be seen when you’re moving fast.” Like the rest of the works in I AM HERE, Santa Monica Boulevard is an energetic celebration of ‘the everyday’ as it is lived.

Hockney lived in Los Angeles for forty years, beginning in 1964. It was on the cusp of the ‘80s that he painted Santa Monica Boulevard on an unstretched canvas in his West Hollywood studio. It was later rolled up and stored away by the David Hockney Foundation, unseen publicly for nearly three decades, except once in 1994 in Japan. This showing at the AGO is the first time the painting has been on view in North America and mounted on a stretcher, as originally intended.

But just how and why did the painting make the journey from Los Angeles to Toronto? Co-curator and AGO Manager of Publishing Jim Shedden explained to us that, “We knew a lot of so-called ‘non-art’ works would be included in I AM HERE so we wanted to pinpoint the artists who were not strongly represented in our [AGO] Collection [and] who are associated with embracing ‘the everyday’ as their subject matter. Hockney came to mind.” Shedden and exhibition co-curator Alexa Greist, AGO Associate Curator and R. Fraser Elliott Chair, Prints & Drawings, first came across the painting in a book of Hockney’s work, not fully realizing its scale (Santa Monica Boulevard is one of his largest paintings to date). Greist added, “This painting just kept jumping out at us, not only because of the brightness [of it] but also in its themes. We thought about how it embraces the ‘street’, and one's moving through the spaces and the places you visit all the time.” The curators were unaware that the painting hadn’t been on view in years, bringing into question its condition and if it could be shown at all. Add to that, Hockney himself had to approve of whether the painting could be displayed.

Miraculously, the painting was revealed to be in relatively good shape – good enough that putting it on view was a real possibility. Hockney gave his approval as well, captured in the photographs below. Eugena Ordonez, a California-based independent conservator specializing in modern to contemporary paintings, was tasked to carefully assess the condition of the work and, working with a team, prepare it for the exhibition. When the painting arrived at the AGO, she worked on it again, this time with Christina G.A. McLean, AGO Assistant Conservator, Paintings. For a better understanding of what was involved with preparing Santa Monica Boulevard (1978–80) to go on view, Ordonez shared her expert insights with AGOinsider. 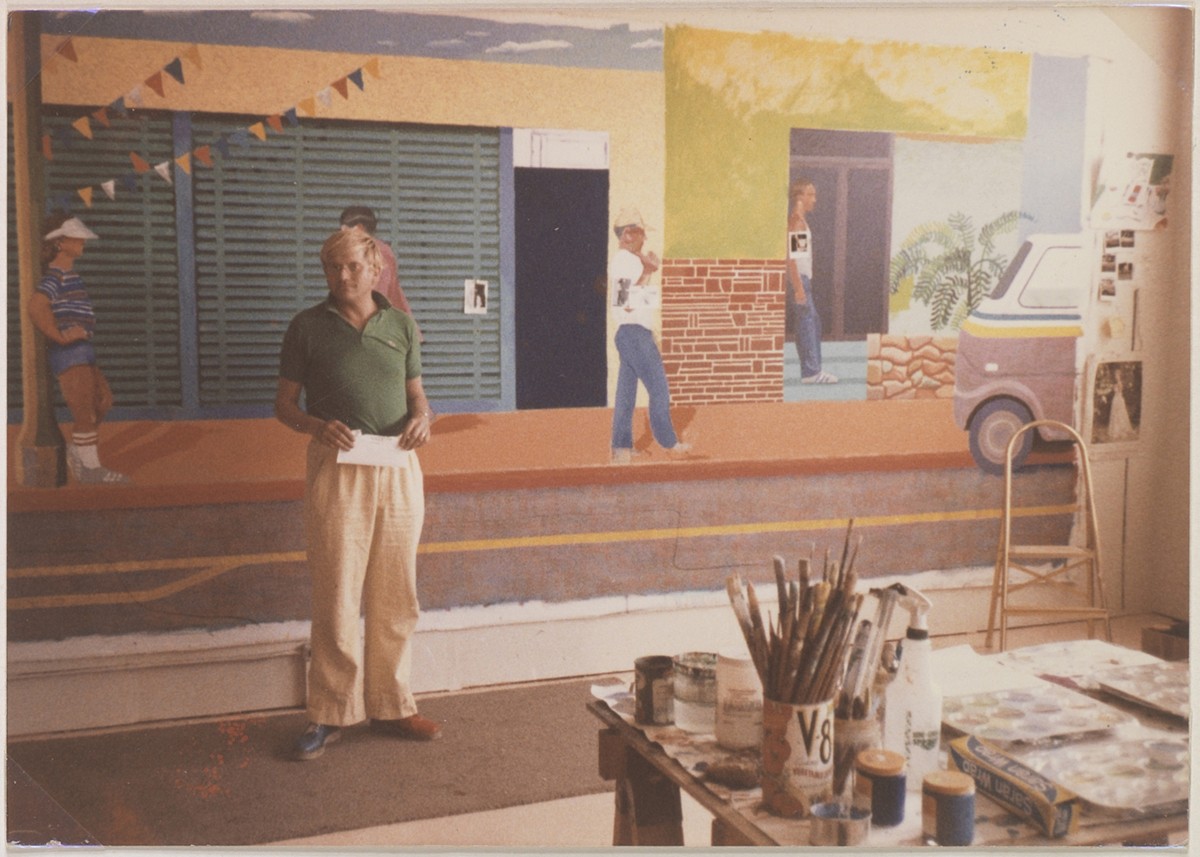 AGOinsider: Can you share an overview of the conservation process, from your first assessment to the installation of Santa Monica Boulevard (1978–80) at the AGO?

Ordonez: Almost every step of the conservation process involved working as part of a group because of the painting's size. The artist was also involved during this project because the painting had never been mounted on a stretcher before, so it was critical that the artist decide on the dimensions of the work.

When the painting was unrolled for examination, it was a great relief to see that it was in overall good condition and mainly needed some general maintenance. The painting was first stretched in Los Angeles, which was a good practice run for the second stretching at the AGO. 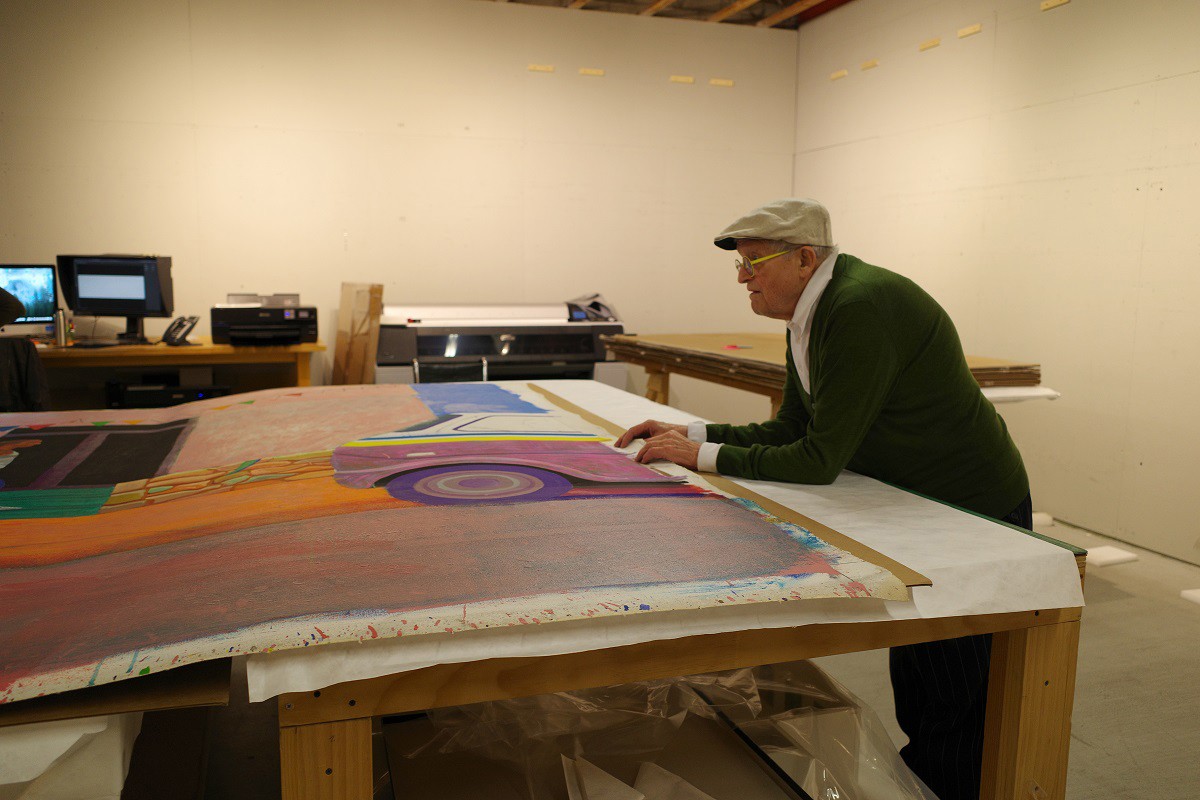 AGOinsider: Can you tell us about the folding wood stretcher that was created and why it was needed?

Ordonez: The size of the painting played a critical role in deciding on a folding stretcher. Whereas the painting was rolled for shipment, the stretcher needed to be made more compact for safer shipment and possibly cost factors as well. The ability of the stretcher to be converted to about half of its width for shipment and then to be expanded and become a sturdy support again, when the painting needed to be stretched, greatly facilitated the whole process of transporting the work and exhibiting it elsewhere. 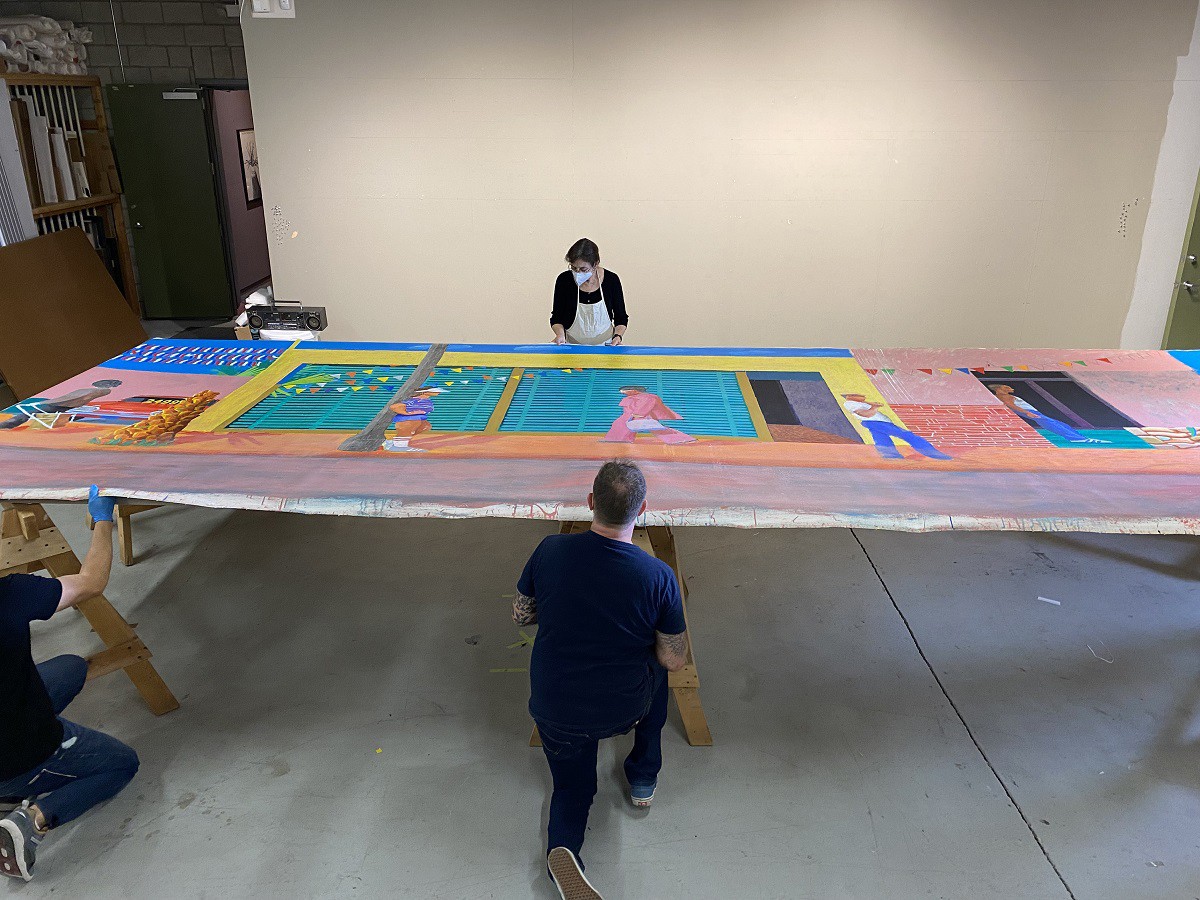 AGOinsider: Did you learn anything about Hockney’s techniques as a painter through this process? Was there anything unanticipated in terms of how the paint was applied that impacted your work or approach?

Ordonez: Being able to see the photographic images he used to create this work, which have been collected in a notebook on the painting, was a unique experience. What he chose to keep in great detail and what was eliminated when he painted the image using these photographs was very interesting. Closer examination of the painting reveals how fearless he was in removing painted objects and reworking passages. 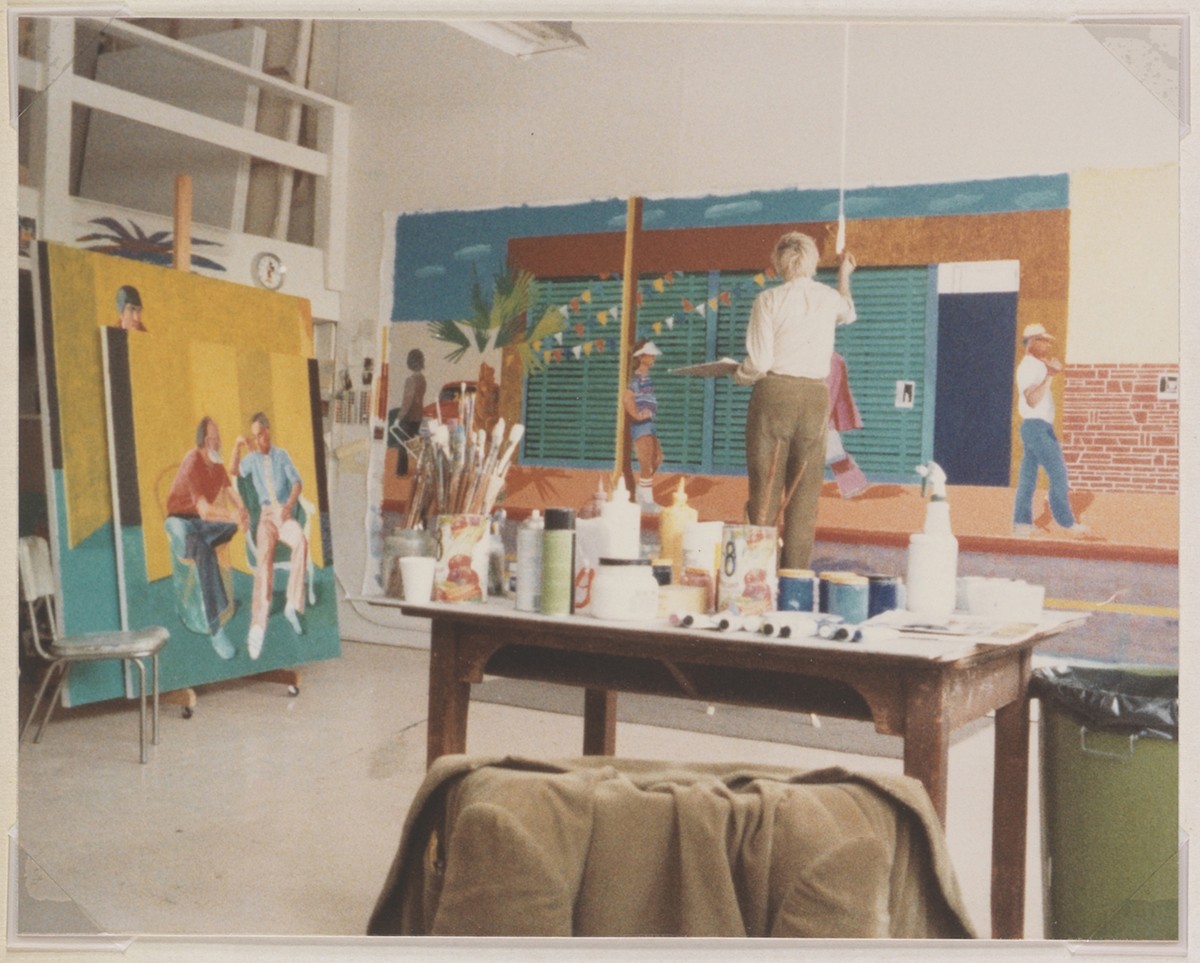 AGOinsider: Have you worked on any other works by Hockney? If so, how did this conservation process compare?

Ordonez: I have worked on several dozen of his paintings, but none so large and none with these particular issues (creating the fold lines and preparing such a large work for travel). His painting technique is fairly traditional and the quality of the materials used is good, so usually the conservation treatments deal with problems caused by external factors. 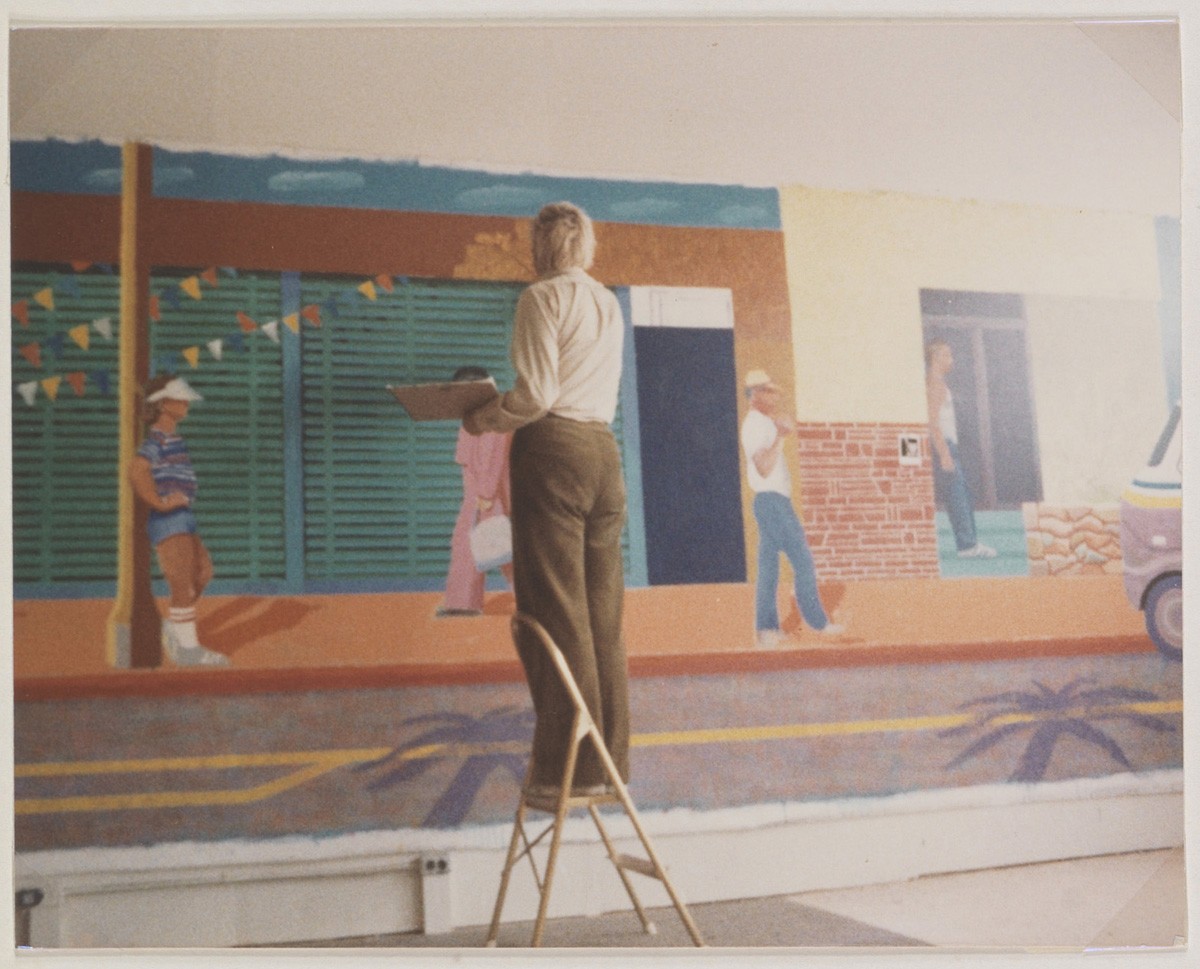 AGOinsider: You've spent a lengthy amount of time with this painting. What interesting details might someone miss at a cursory glance?

Ordonez: What is easily missed and what made stretching the painting rather challenging is the scarcity of actual straight horizontal and vertical lines in the work. In practice, this meant that when one edge (for example, of a wall or street) was established as straight (parallel to one of the edges of the stretcher), other lines appeared angled in the image. We had to keep shifting the painting's position, prior to securing it on the stretcher, to find just the right balance of "straightness" for the vertical and horizontal edges and resorted to various methods and tools to help us determine that.

See this work and others before the exhibition closes August 14. I AM HERE: Home Movies and Everyday Masterpieces is curated by Jim Shedden, AGO Manager of Publishing; Alexa Greist, AGO Associate Curator and R. Fraser Elliott Chair, Prints & Drawings; and archivist, scholar and writer Rick Prelinger. Pick up the exhibition catalogue online or in person at shopAGO.