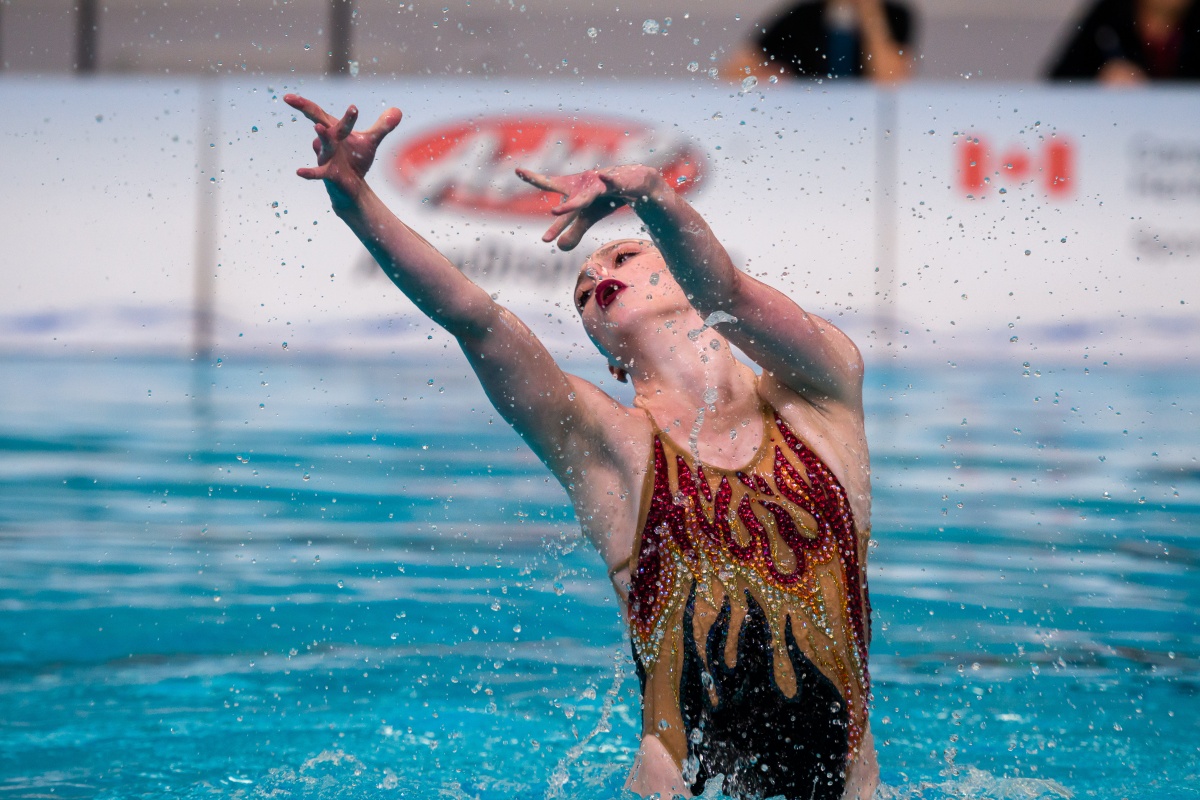 What qualities make a sport artistic? Does it come down to aesthetics, or does it have to demonstrate skillful execution? Featuring a blend of swimming, dance and gymnastics, artistic swimming (formerly known as synchronized swimming) takes centre stage at the Tokyo Olympics beginning August 2. Ahead of the team and duet events, we spoke with Toronto’s Emily Armstrong, a member of Canada's Artistic Swimming Senior National Team, who will be competing along with her seven teammates.

But first a quick history lesson. Once known as water ballet, the first synchronized swimming competition took place in 1891 in Berlin. Those unfamiliar with the history of the sport may be surprised to learn of its crucial Canadian connection: Peggy Seller, known as “Canada’s First Lady of Synchronized Swimming'', is credited as being a leading figure in the sport, her influence beginning in Montréal during the mid-1920s with the establishment and standardization of Provincial Championship competitions. Seller became recognized in Canada and internationally as an expert and decorated athlete in the sport: authoring instructional guides, holding executive positions in swimming organizations, and winning the first official synchronized swimming championship. Synchronized swimming entered the Olympics as an official sport for the first time at the 1984 Games in Los Angeles, and it was 2017 when the sport was officially renamed artistic swimming, a decision made to better reflect the dynamism of a sport not just defined by its synchronicity. So far, Team Canada has won eight Olympic medals in artistic swimming, most recently winning bronze at the 2000 Games in Sydney. 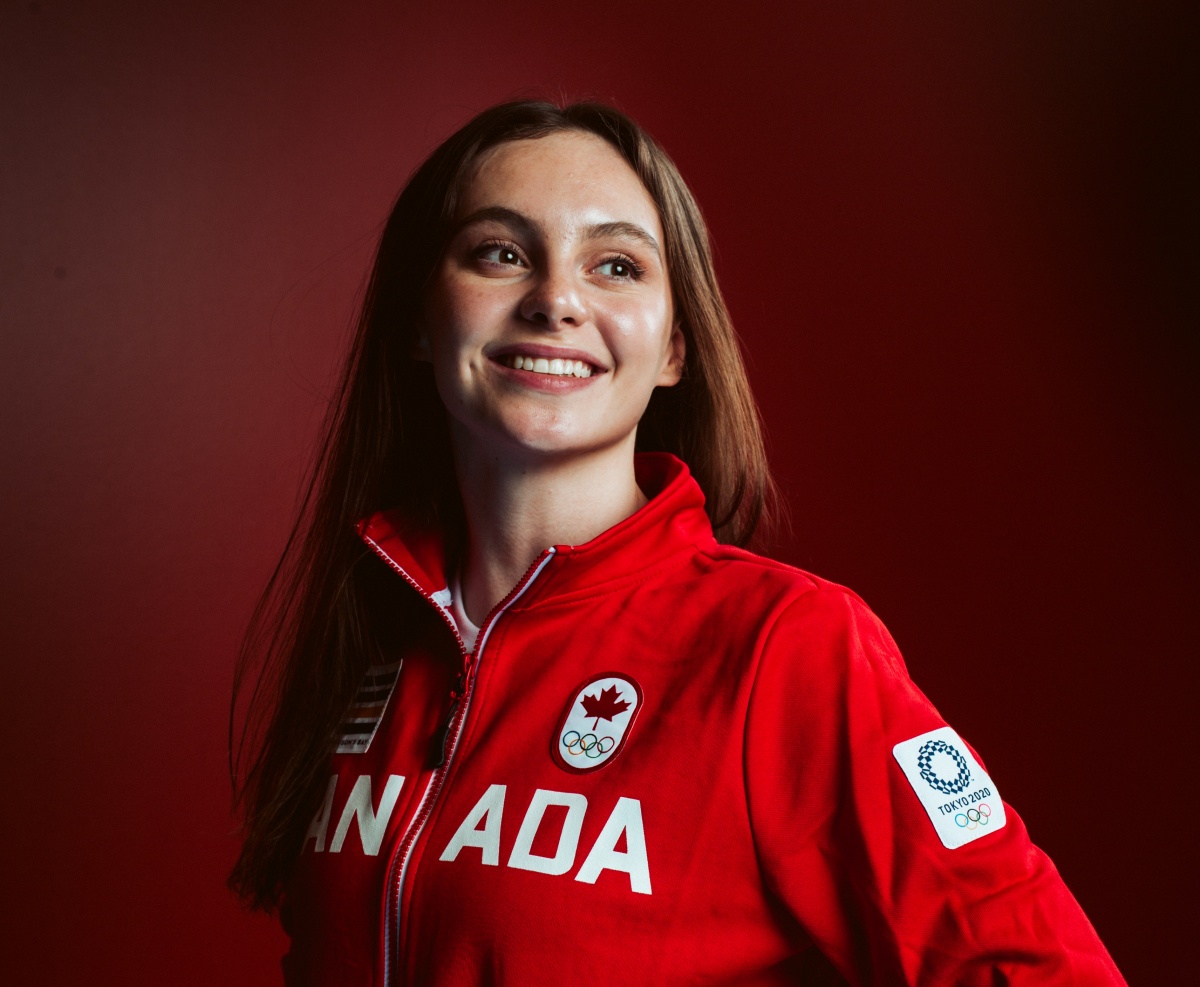 AGOinsider: Growing up in Toronto, what was your first exposure to artistic swimming?

Armstrong: My first exposure to artistic swimming was when my older sister Amy went to “bring a friend night” with our neighbour at Variety Village Synchro Club in Toronto. My sister enjoyed synchronized swimming so my parents decided it would be good for me to try the Little Mermaid program that would run at the same time as my sister’s practices. My two older brothers, Josh and Tyler, did hockey and speed swimming as well. My parents decided getting me involved in swimming would be an easy solution so they wouldn’t have to drive all over the city taking us to different extracurricular activities! I started Little Mermaids when I was three, and competed at my first competition when I was five.

AGOinsider:  When deciding your choreography, where does the team go for inspiration? Does the music lead or follow?

Armstrong: When our team choreographs a routine we usually use a choreographer like Anastasia Ermakova (four-time Olympic champion). However, growing up in my club, my coaches always choreographed our routines with input from the team. I think the music leads and that’s where most of the inspiration for choreography comes from. It’s really important to accent the music with our movements as it increases our Artistic Impression score, which goes into our overall mark.

AGOinsider: Artistic swimming has clearly evolved since its debut.  Are there discernible trends in the sport? Have there been shifts in what judges want to see?

Armstrong: I think there are definitely trends in the sport that shift every few years. For example, when I was around 13, 15 years old, everyone was swimming to classical music, but now a lot of countries are starting to swim to upbeat and fun songs. I think the shift in music choices has followed the increased speed of movement. Artistic swimming used to be very slow and you would swim really far apart from your teammates. Now, the movements are really fast and you have to swim super close to your team to get a good difficulty score, which is included in the overall score. It’s hard to say what judges are interested in, I think everyone has their own specific taste! This year at the Olympics, our team is actually doing a type of hip-hop technical routine to Wild Thing by Tone Lōc .

AGOinsider: Half athletic gear, half artistic expression – what factors determine the design of your costumes? Is costume even the right word to use?

Armstrong: We call them our “competition suits”. Our competition suits are basically designed around the theme and music of our routine. People get them from many different suit-makers. The Canadian Senior National Team gets them from Calgary-based Living Water Designs.

AGOinsider: Esther Williams movies are what comes to mind for some people when they hear artistic swimming. What do you wish people knew about the sport?

Armstong: I wish people knew how difficult it is mentally and physically. Our sport is made to look easy, so people don’t really see all the effort that goes into it. We definitely practice more than a lot of sports, most of the time it’s eight, nine-hour days, six times a week. Since our sport is also a judged sport, there’s a lot of pressure to be perfect in our three-minute swim in front of judges. This is why I think artistic swimming is a huge mental game, just as much as it is physical. Physically, artistic swimming is a lot more difficult than it seems as well. It’s important to be powerful but also graceful. Everyone always says it’s like running sprints while holding your breath, that’s the best way I can think to explain it!

AGOinsider: Obviously due to COVID, this Olympics will be very different. But if you could see one thing in Tokyo, what would it be?
Armstrong: I first went to Tokyo in April 2019 for the Japan Open. Tokyo is definitely one of my favourite places to visit. Unfortunately, I didn’t get to see too much because we were competing, but I did see a bit! One thing I’d really love to see is Mount Fuji. 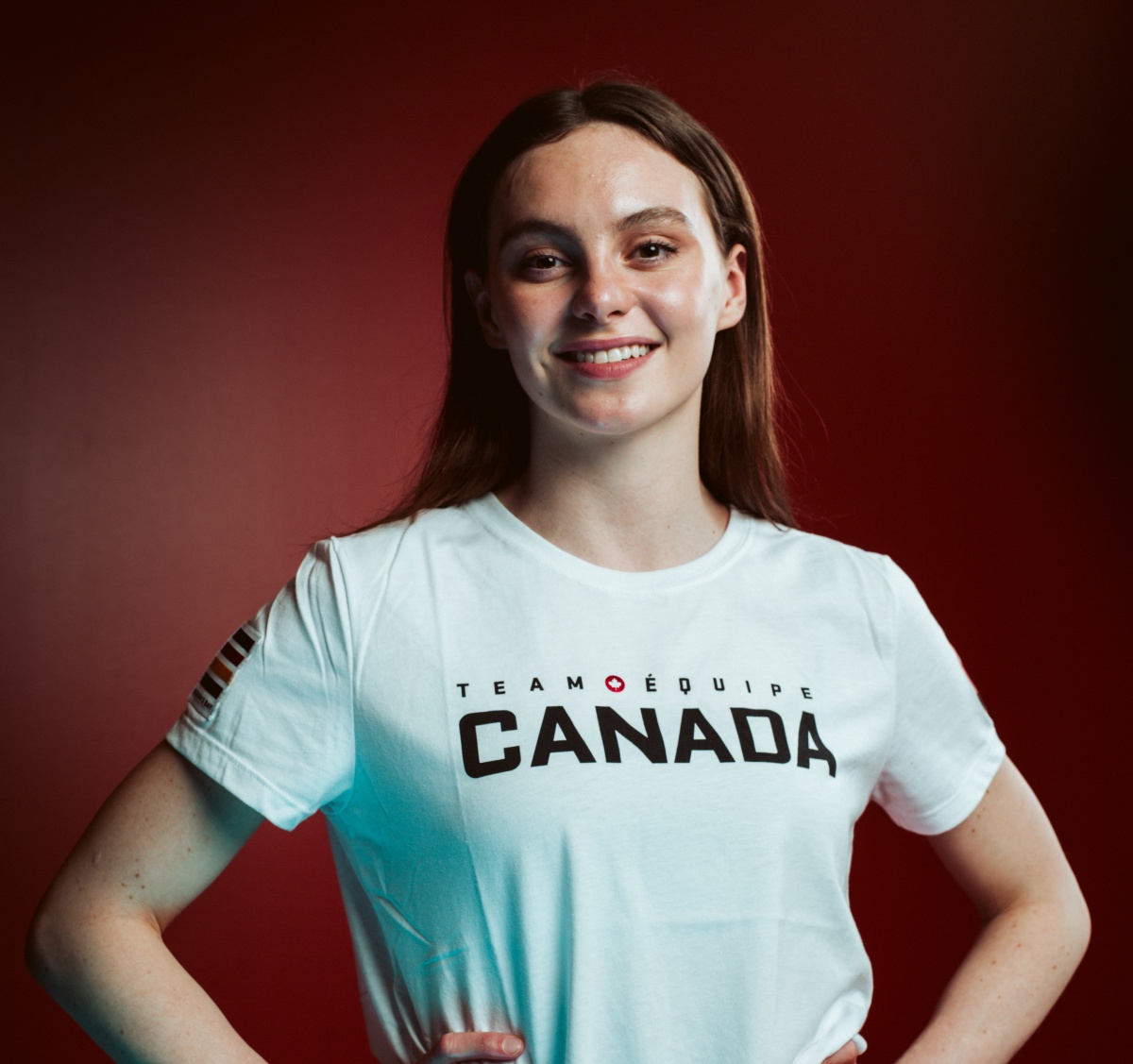 AGOinsider: Do you have any memories of visiting the AGO as a child?

Armstrong: I remember going on school field trips to the AGO as a kid. I used to really enjoy seeing the exhibitions and getting to make a bunch of different artworks. I’ve always really liked art, my Dad is a big art fan so I think I get that from him. When I was little, there was a point in time where I wanted to be an artist, but unfortunately, that dream was short-lived.

AGOinsider: Can you describe an average day in the life of an artistic swimmer?

Armstrong: Right now, an average day on the Artistic Swimming Senior National Team starts at 6:45 am. I wake up and make a smoothie or a small breakfast before our first training session. We normally start in the gym and do strength or cardio training. Afterwards, we get in the pool and train until 12:30 pm to work on our routines. We then get a two-hour break to eat and relax, and after that we usually go back to the gym for another workout or a flexibility session. It’s then back in the pool until 6 pm and stretching until 6:30 pm. Then we go home, eat and sleep to restart the next day!