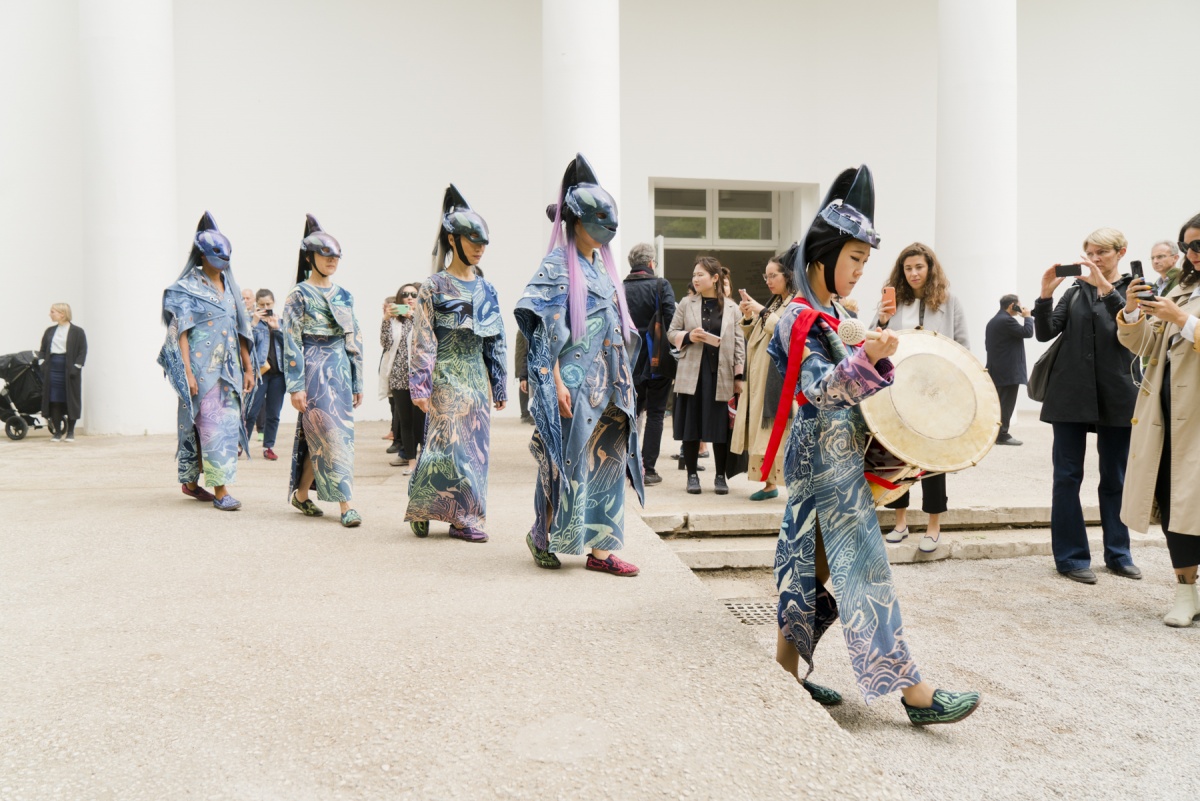 AGO Live, the performance series that incorporates art, dance and music within our gallery walls, is marching hot into 2020 with Zadie Xa and her enchanting processional piece Grandmother Mago on January 15 and 16.

Xa’s piece, which was recently performed at the 2019 Venice Biennale, weaves together acoustic drumming, dance, costumes and painted sculptural elements in a processional march that fuses the matriarchal spirit of a famous Korean creation myth and a 100-year-old orca whale.

Intrigued? We are, too. Ahead of Grandmother Mago’s Canadian premiere, we sat down with Xa to unpack the piece.

AGO: What are the background and influences behind the Grandmother Mago character?

Xa: Grandmother Mago is the English translation of Magohalmi, the central figure in an old Korea creation myth. The story was passed down orally but had generally been forgotten until it was rediscovered in the ‘80s. I owe much of my understanding of Goddess Mago from the research of academic Helen Hye-Sook Hwang.

My version of Grandmother Mago is a merging of the Korean mythological figure and the famous orca Granny (also known as J2), who died in 2016 and may have been over one hundred years old.

AGO: You’ve mentioned before that as an Asian woman presenting work that may appear “traditional or folkloric”, you have concerns about viewers passively consuming the work as entertainment. How does this concern impact your creative process?

Xa: Ultimately I try to think about the agency held by each performer and how they will interact with, and around, the viewer. The drive to create the work has little to do with performing for an audience, instead it is about embodiment and the narrative told via the energy of all persons performing. I do think about the dangers of self-exoticism and the commodification of identity politics because they are serious and real issues to contend with, however it is important for me not to get ensnared into that mindset as it is creatively limiting.

I love theatrical costumes, over-the-top performance and storytelling. It’s the only method by which I am interested in disseminating the performative side of my practice.

AGO: What do you find so fascinating about orca whales?

Xa: Growing up on the Pacific Northwest Coast, orcas have always reminded me of home. Their place within First Nations culture and mythology is felt and seen throughout Vancouver, most prominently through the incredible imagery of their artwork.

Orcas are incredible creatures, equal to if not superior to humans. As a young child I was aware of their profound intelligence and the deep social bonds shared between them; however it was not until I became older I learned of their matriarchal social structures. I am fascinated by how orcas’ intelligence and survival skills are passed down from grandmothers and mothers. I am especially interested in the fact that orcas are one of the few animal species who go through menopause, placing the female orca’s importance outside mere biological value. The life cycle of most animals ends after they procreate, however orcas stop reproduction at around age 40 and can live up to 80 years or older.

AGO: Since the Grandmother Mago performance is a moving procession, how do you navigate your route through a space like the AGO?

Xa: Audience engagement, position and placement are all elements that take central focus when I am developing each performance. I am usually in favour of having the audience function as active participants within the work, similar to how one must engage with an installation or sculpture within in a gallery space.

The performance at the AGO will invariably be different from the Venice Biennale version because of the physical setting of the performance. We will have to think of a specific route that flows best with the energy projected by the Gallery. The performance will include processional moments but will also take in consideration the beautiful open-plan, stage-like space of Walker Court. There will be different masks worn by the performers and “Grandmother Mago” will combine aspects of “Child of Magohalmi and the Echos of Creation”, a subsequent performance and exhibition installation.

Don’t miss Grandmother Mago happening January 15 from 7 to 8 pm and January 16 from 4 to 5 pm in Walker Court. This is a free event included with admission.