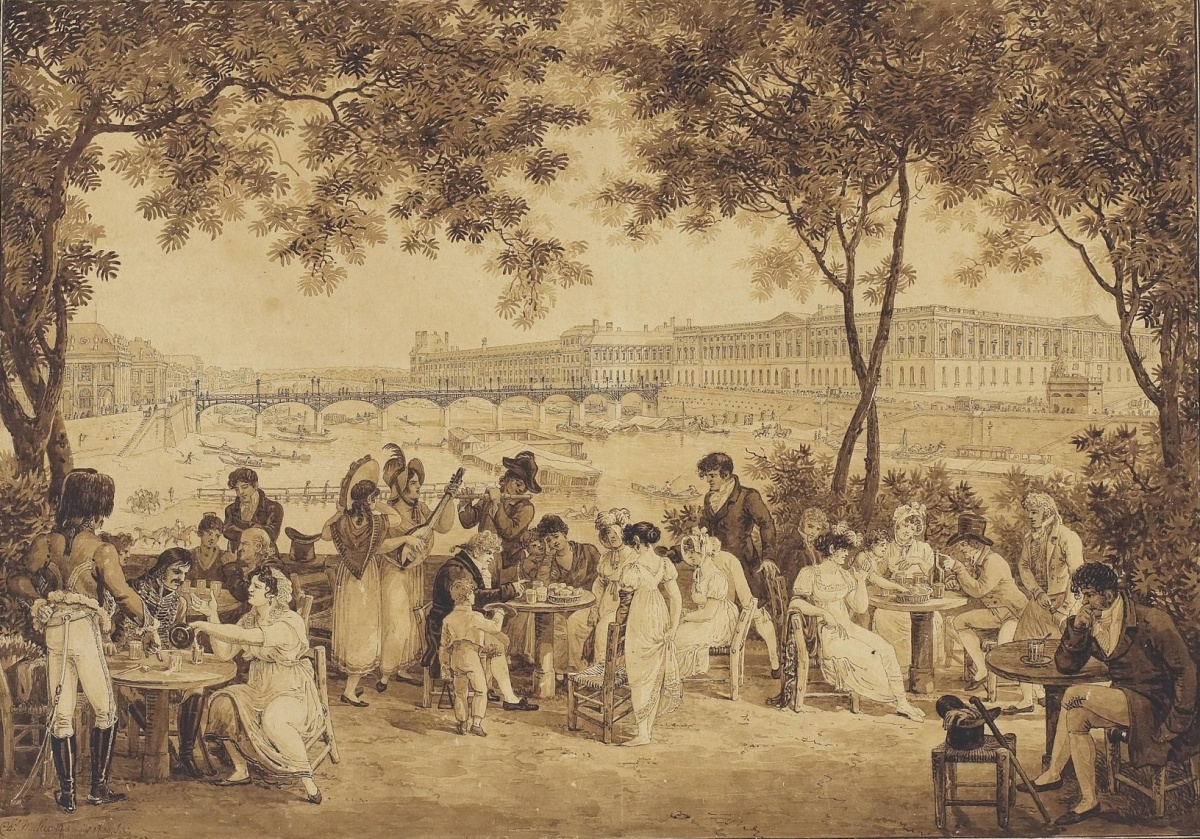 The sun's out and we can’t wait for you to take a seat at AGO Bistro’s new patio. Opening on July 21 at the corner of Dundas St. West and McCaul, the patio will be a great place to enjoy some refreshment before or after visiting the Gallery (which reopens the same day). Check out AGO.ca/ago-bistro anytime for details, including menus and hours. Capacity limits, screening and contact tracing measures will be in place as required.

To get ready for the experience, we took a quick trip through the AGO Collection to familiarize ourselves with café culture.

First stop: Paris! Renowned as the birthplace of the modern restaurant, Paris has been cherished for its patios since the 17th century. The oldest café in Paris is Café Procope, which opened in 1686, and has been more or less in continuous operation since then. In 1723, it is estimated there were 323 cafés in Paris; by 1790, more than 1,800. They were places for meeting friends, and for literary and political discussion. As Hurtaut and Magny wrote in their Dictionnaire de Paris in 1779: "One gets the news there, either by conversation, or by reading the newspapers. You don’t have to encounter anyone with bad morals, no loud persons, no soldiers, no domestics, no one who could trouble the tranquility of society."

And yet, the French artist Charles Francois Muller, in his fascinating work on paper, The Cafe du Limondier on the Pont Neuf, begs to differ. In his exciting portrait of alfresco dining on the banks of the river Seine, Muller depicts not only soldiers and musicians, but children and more than a few questionable behaviours. While likely inspired by a real café adjacent to Pont Neuf, itself the oldest bridge in Paris, the title of the work gives us pause, due to its similarity to the word limonadier. Limonadier has more than one meaning – referring of course to a maker of lemonade, and more generally to the sellers of beverages, many alcoholic. King Louis XIV had a personal limonadier and it was a much-celebrated position at court. Whether satirical or not, the image does suggest a variety of scenarios that can be interpreted in many ways.. 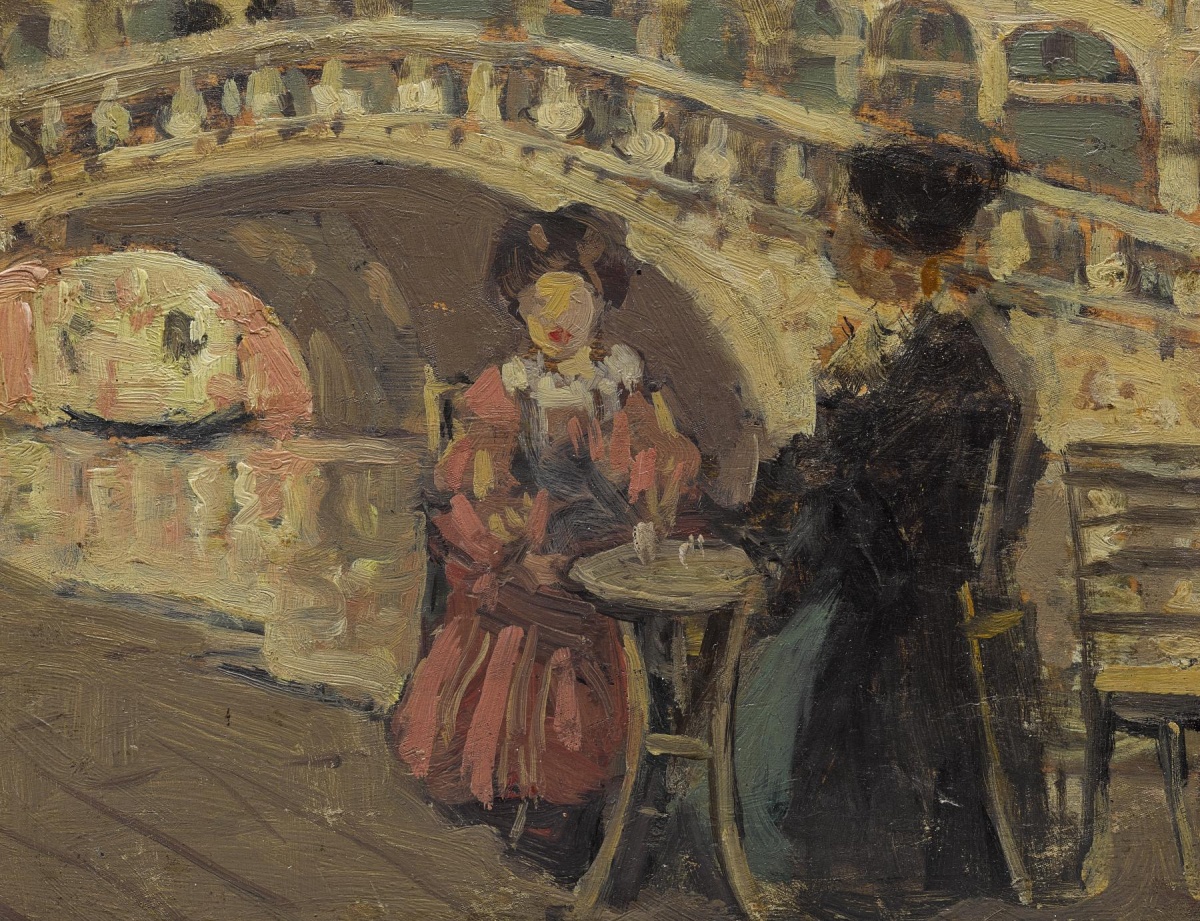 On the more reflective side, two centuries later we see the quiet, almost dour, patio scenes of J.W. Morrice. It was in 1890 when the Canadian painter began his self-imposed exile from Montreal, establishing a base in Paris and travelling extensively across Europe, North Africa and the Caribbean. Morrice was heralded by the critic Louis Vauxcelles in 1909 as “without a doubt the most successful North American painter in France”, who was “neither a portraitist nor landscapist—simply a painter, and one of the best to-day.” The AGO is home to two of his café scenes – Sketch for "La Place Chateaubriand, St. Malo", ca. 1902, and Two Women Seated Near the Rialto Bridge, Venice, ca. 1902. In both images, well-dressed women pose quietly at little tables, adjacent to popular tourist destinations, seemingly content just to soak in the atmosphere.

A popular seaside destination, Saint-Malo is a walled city on the north coast of France, as famous for its beaches as its history of piracy. Between 1890 and 1907, Morrice visited Saint-Malo on a number of occasions, painting its beaches and ramparts. In the summer, La Place Chateaubriand was the epicentre of refined society, an elegant hotel and outdoor café, perched on the main square above the stone walls. It is still in operation today. 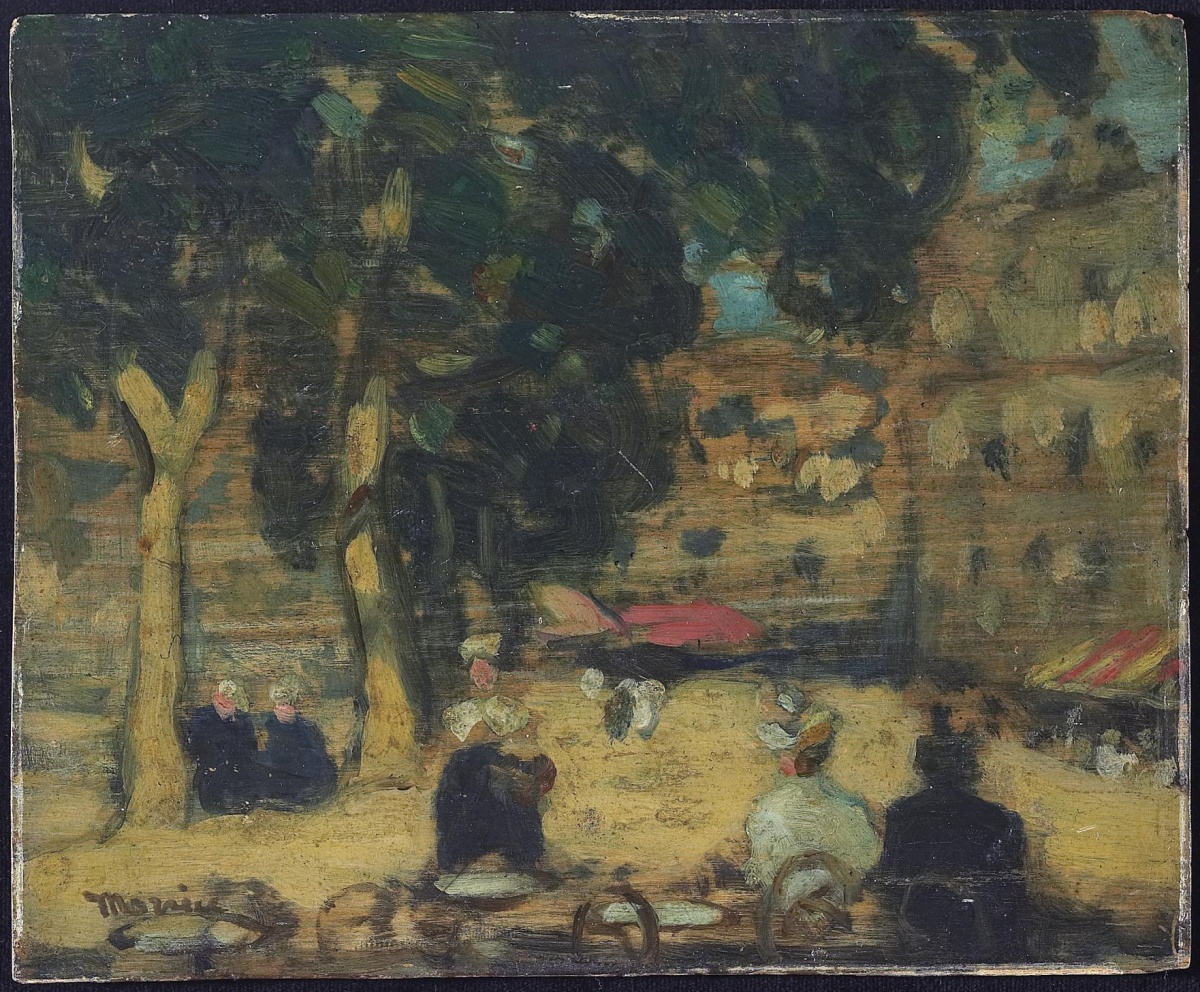 Venice in the 1890s was a main stop on the European Grand Tour, a right of passage for those with means. An early guidebook from 1834 declared Venice’s Caffe Florian “the resort of the aristocracy and the favourite coffee house of English and American tourists." A favourite haunt of the legendary Casanova – it was one of the first in Venice to allow women inside – Caffe Florian has existed since 1720.

No tour of outdoor dining would be complete without a nod to perhaps the most famous of them all. Originally entitled Café, le soir, Vincent van Gogh’s painting Café  Terrace at Night (1888) (now in the collection of Kröller-Müller Museum in Otterlo, Netherlands) depicts a brightly lit café against the starry sky in his signature Post-Impressionist style. Today, people can dine on the terrace at Le Café la Nuit, a van Gogh-themed restaurant in Arles, France.