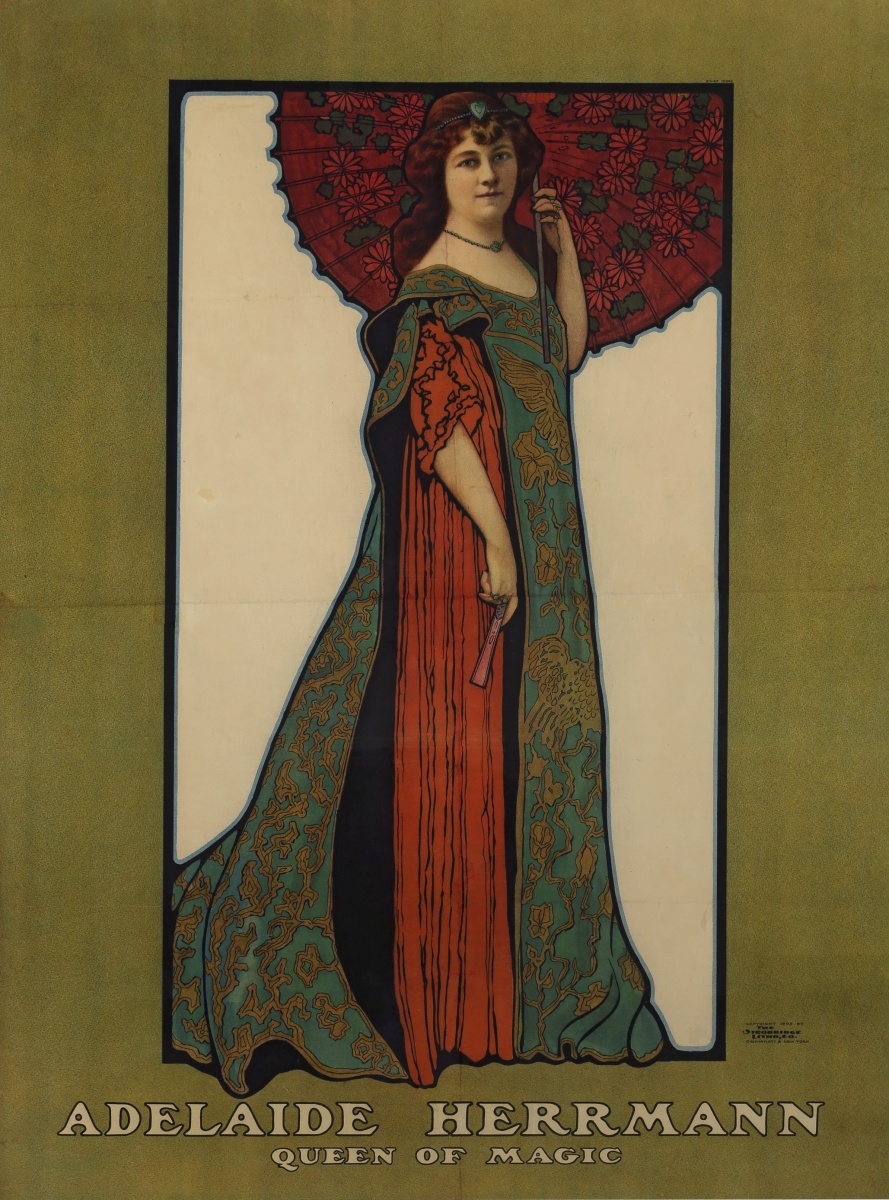 At the peak of her career, Adelaide Herrmann was heralded as the Queen of Magic. For more than 25 years, she toured an enormously successful solo act, winning fame and adoration from audiences around the globe. Her skill was immense, her approach fearless; during her era she was one of only a few magicians (and the only woman) to perform the infamous bullet catch, a dangerous trick that could result in death on stage.

So why don’t we remember her name? Several posters in Illusions: The Art of Magic give us a glimpse into the meteoric rise of this lesser-known star.

Before she became the Queen of Magic, Adelaide Herrmann was the wife and stage assistant of Alexander Hermann (better known as Herrmann the Great.) Beginning as a prop assistant, she soon joined her husband on stage to assist with various illusions and stunts. Throughout the 1870s and '80s, Alexander’s shows toured North America, Europe and South America with Adelaide playing a supporting role. A fearless performer and skilled dancer, she would often be fired out of cannon or ride a velocipede while balancing a woman above her head. At the time, she was also known for a dazzling dance number that used twirling red silks to imitate flames.

Even today, magic is something shared from one magician to another through mentorship. But during the Victorian Era, this tradition was heightened by the need to guard the secrets of the tricks, even from apprentices, who might steal them and strike out on their own. For the  Herrmanns, their trust allowed Alexander to mentor Adelaide, teaching her new skills and increasing her role in their act until she was a marquis member of the show. The posters on display in Illusions: The Art of Magic demonstrate this gradual transition, as older posters depicting a solo Hermann the Great give way to newer posters depicting both Herrmanns together.

In 1896 Alexander died, leaving Adelaide to carry on the Herrmann legacy. After a brief stint performing with Alexander’s nephew, Adelaide struck out on her own using everything she’d learned to headline her solo tours.

Throughout her solo run Adelaide perfected a number of mystifying illusions, including the “Burning Witch,” which featured a grizzled woman lighting herself on fire only to emerge from the flames as a beautiful dancer. Adelaide’s favourite illusion was reportedly the “Phantom Bride,” which used levitation techniques to tell a compelling story of marriage and loss.

Illusions: The Art of Magic features a number of posters from Adelaide Herrmann’s illustrious 25- year solo career, including the spectacular Art Nouveau-style poster seen above. While her story may seem incredible – a woman magician stepping out from the shadows of her husband’s fame – this narrative wasn’t uncommon for woman performers at the time. In general, Victorian sensibilities and values relegated women to the role of a lovely assistant or of a prop to be beheaded, levitated or sawed in half.

The womean performers who transcended this stereotype were often (but not always) related to male magicians. This includes Kittie Baldwin (featured in the exhibition) and Suee Seen, the wife of performer Chung Ling Soo.

To learn more about the role of womean magicians in the Golden Age of Magic, visit Illusions: The Art of Magic.at .