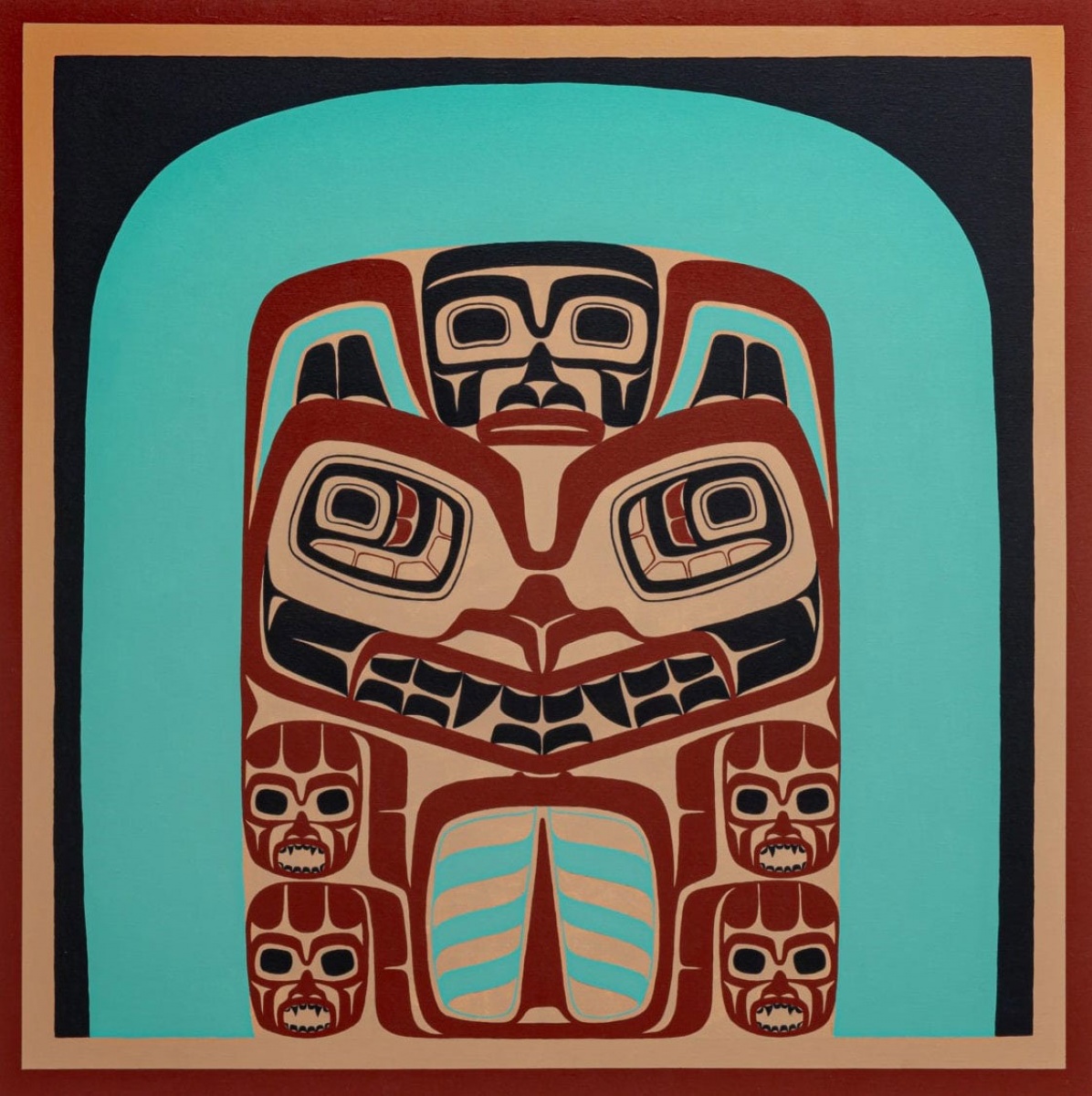 Luke Parnell’s artistic practice plays amidst notions of past, present and future. He’s primarily concerned with investigating oral histories and contemporary iterations within Northwest Coast Indigenous art. Raised on the western coast of Canada in a community where Indigenous and non-Indigenous people live together, Parnell is Wilp Laxgiik Nisga’a from Gingolx on his mother’s side and Haida from Massett on his father’s side. He’s informed both by tradition—he completed an apprenticeship with a Master Northwest Coast Indigenous carver—and by academia: he holds both a BFA and an MAA from OCADU and ECUAD, respectively. A multidisciplinary artist and assistant professor at OCADU, his work has been shown in a range of exhibitions at the National Gallery of Canada, the MacLaren Art Centre and more. 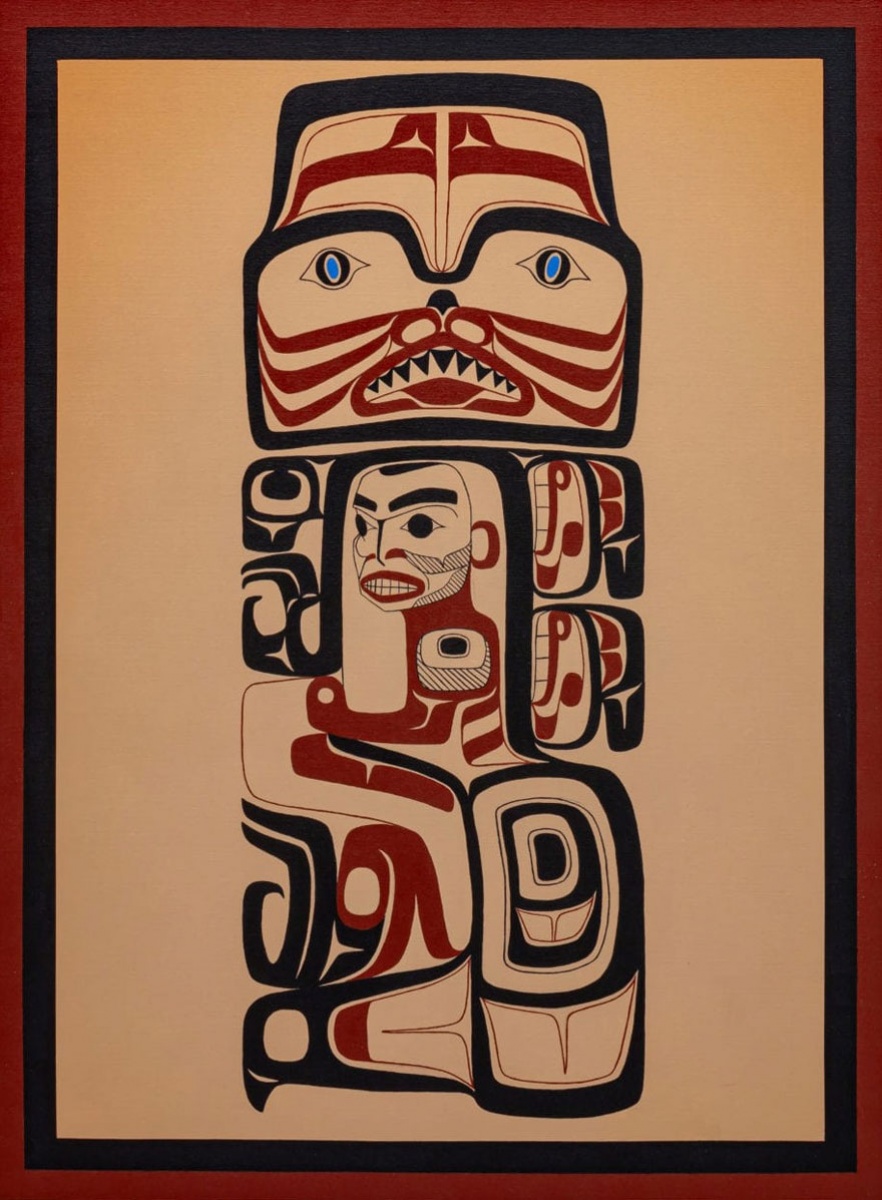 Parnell’s work has been on display at least three times in the past year alone. Luke Parnell: Repeat the Chorus Three Times is currently on view at the Varley Art Gallery of Markham until September. Thanks to the dynamic virtual tour of the exhibition, visitors can immerse themselves in the space and the work—outside of the gallery walls. Indigenous History in Colour was first hosted by MKG127 in 2020 and travelled to the Bill Reid Gallery of Northwest Coast Art in 2021. Included in this exhibition and later acquired by the AGO is Re-Contextualizing the De-Consecrated (2014). As a series of seven acrylic on canvas paintings and printed wall texts, it responds directly to how Northwest Coast Indigenous culture has been and continues to be contextualized in the museum space. More specifically, it maps the trajectory of Northwest Coast Indigenous art from being seen from the (White) colonial gaze in the 20th century to being seen with Indigenous perspectives at the forefront in recent years. 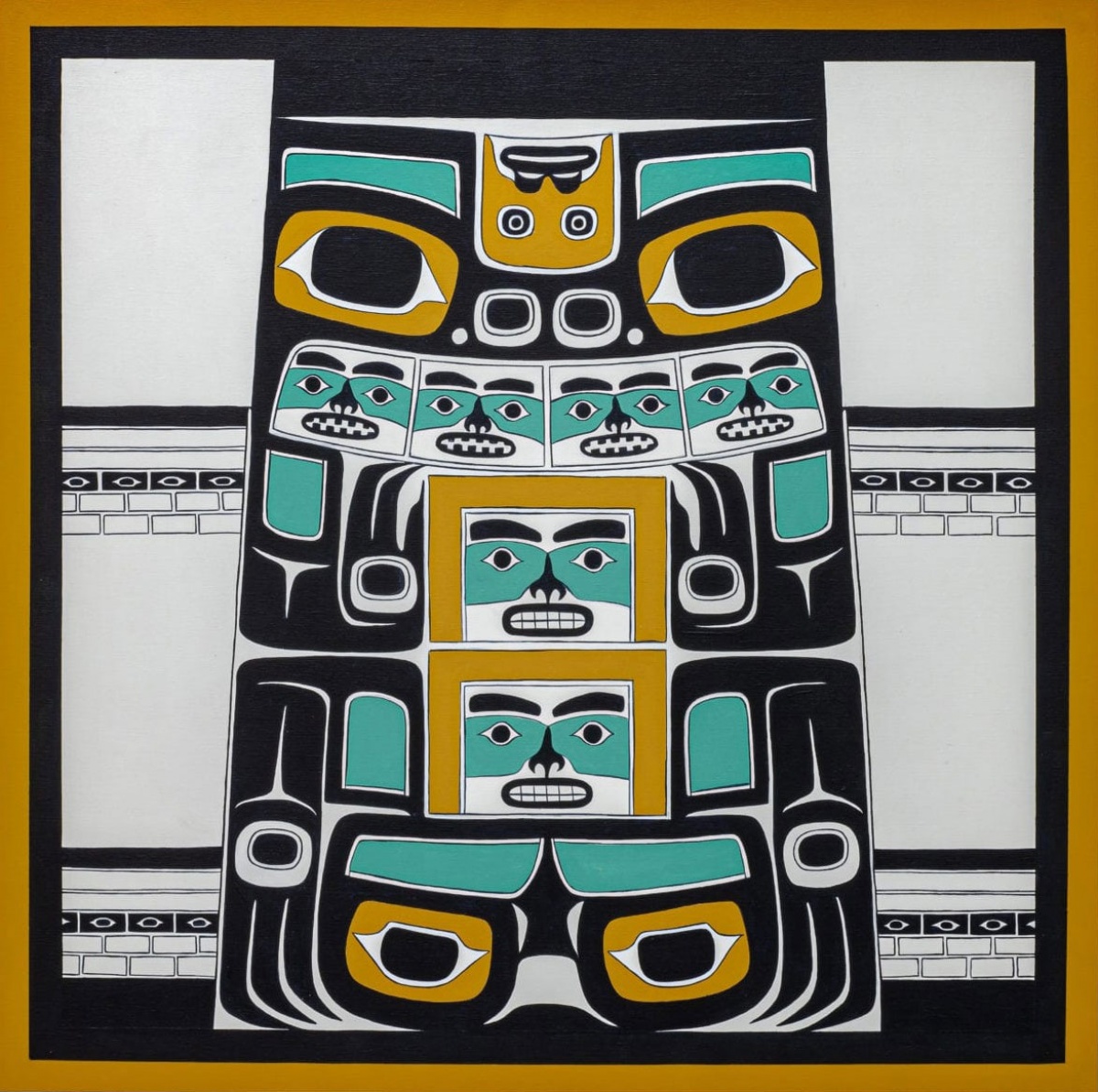 The idea for Re-Contextualizing the De-Consecrated came to Parnell while teaching an art history course at the Freda Diesing School of Northwest Coast Art, further prompting him to explore this narrative from an artist’s perspective. He researched seven major exhibitions that showcased Northwest Coast Indigenous art and Indigenous art broadly; starting with Arts of the Raven held at the Vancouver Art Gallery in 1967 and culminating with Beat Nation: Art, Hip Hop and Aboriginal Culture in 2012 (which was toured across Canada by the Vancouver Art Gallery). Arts of the Raven is cited at the first instance where Northwest Coast (Indigenous) culture was considered for its artistic merits, beyond ethnological and anthropological considerations. Beat Nation fast-forwards to 2012 when Indigenous traditions were re-evaluated with Hip-Hop culture as the backdrop. “As far as the paintings go, I created them based on the work in these exhibitions. I was even appropriating things from the exhibitions,” Parnell explained in his Art in the Spotlight talk with Wanda Nanibush, AGO Curator, Indigenous Art. “I really wanted to study the way [art and curatorial practice] has changed over the years from Arts of the Raven to Beat Nation, and try not to judge. I wanted to put it on display and let [the audience] decide for themselves whether one way of curating is better than the other, and also to observe where the perspective of the curator changes from ethnological to Beat Nation, where someone has an understanding of the culture where the art is coming from.” 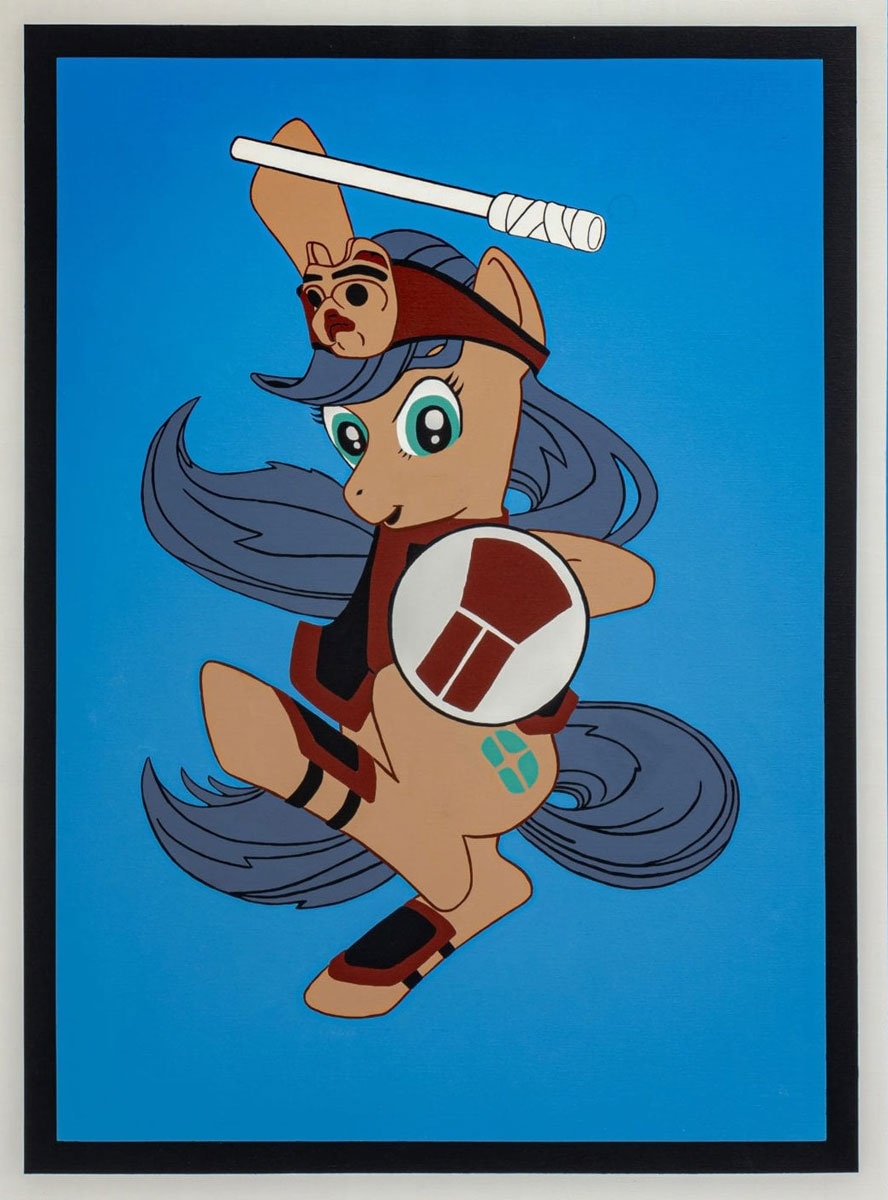 The wall text that accompanies each painting also plays on this notion. It features a “surrealist” mishmash of the curatorial statements of each of the exhibitions. “I looked at the curatorial statements and I looked at criticism,” explained Parnell. “I created [a didactic panel] using the words, putting it all together using [different] voices. When people first see it [the work], they think I wrote it but I didn’t. I edited it.” 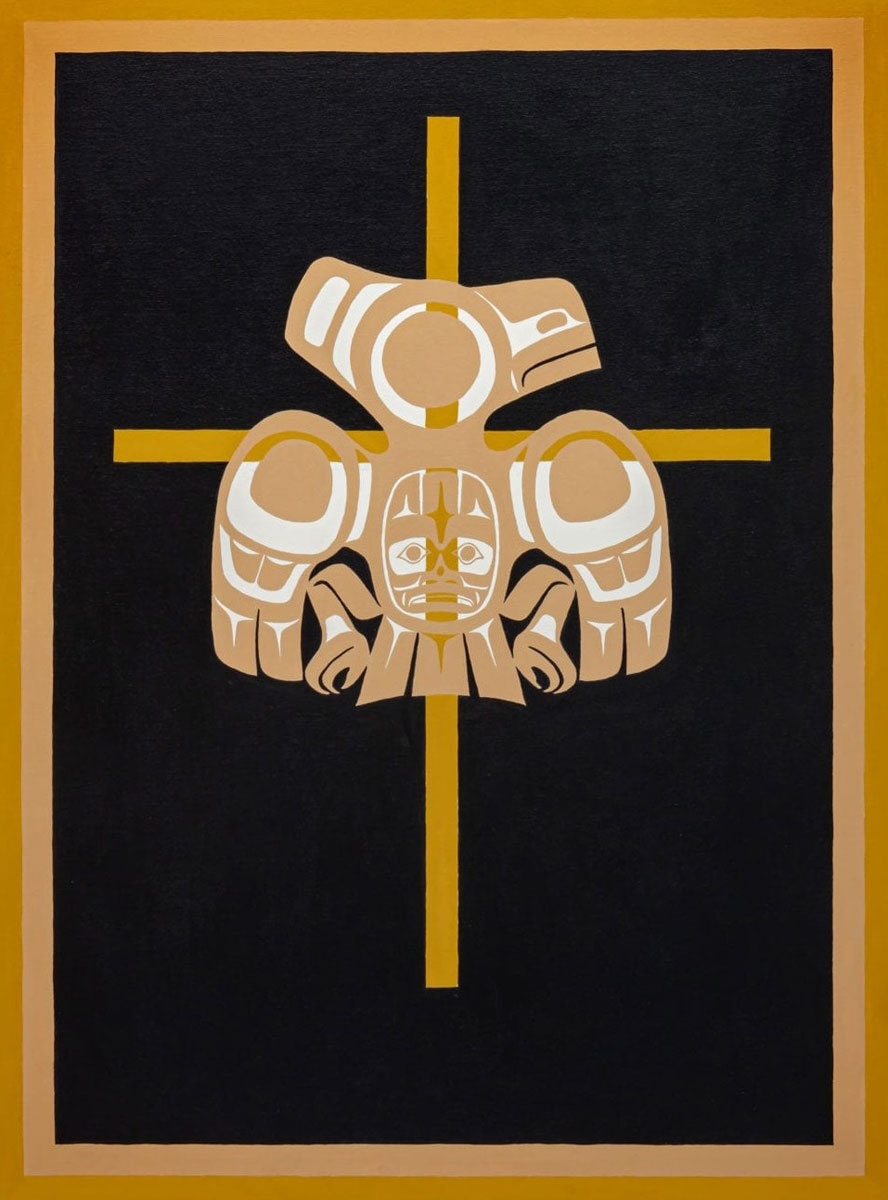 For a deeper look into Parnell’s work, including Re-Contextualizing the De-Consecrated, watch his conversation with Wanda Nanibush from September 2020. This Art in the Spotlight talk was generously supported by TD Ready Commitment.

Read more stories about our Art in the Spotlight series, featuring Ernest Cole, Dana Slijboom Gloria C. Swain and more, all on AGOinsider.