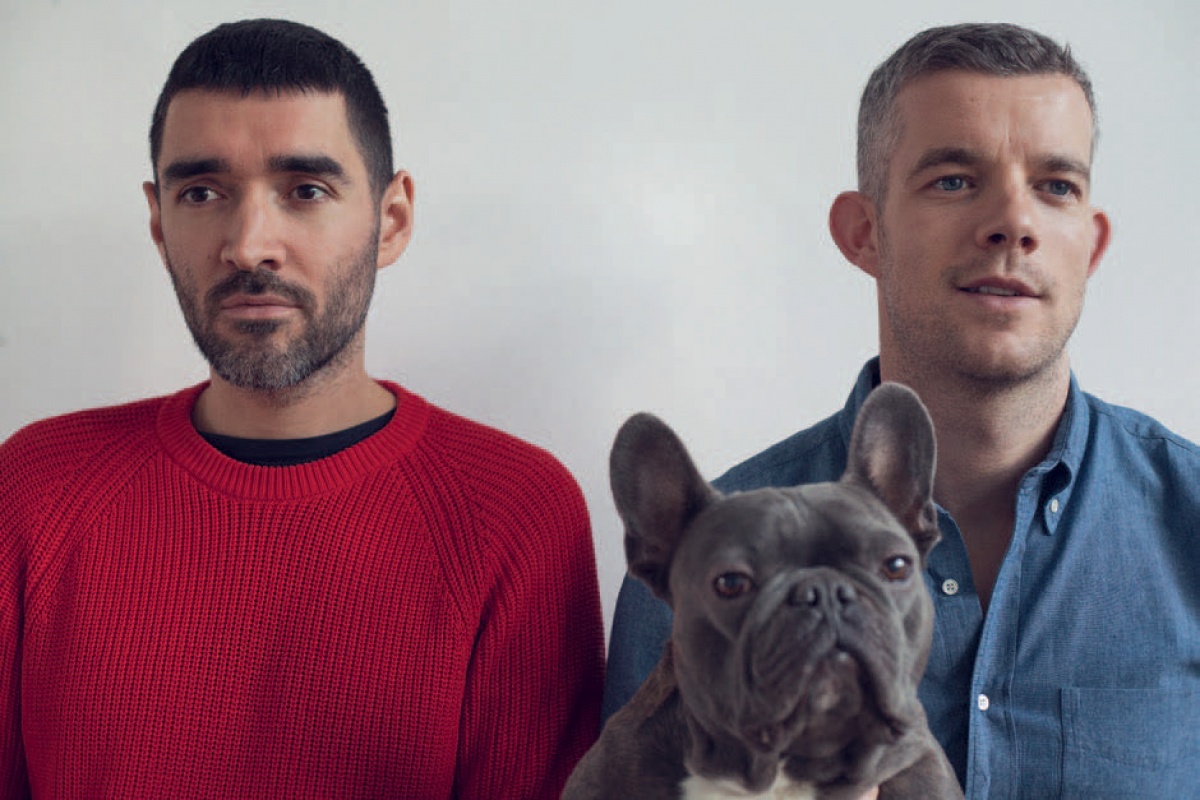 Podcasting about art isn’t an obvious choice. No pictures, for starters. But what if a more accessible way into contemporary art isn’t through looking, but by listening? It’s a proposition that British actor Russell Tovey and art dealer Robert Diament, the hosts and creators of the podcast series Talk Art, have brought joyously to life – and now to the page. Propelled by the pair’s enthusiasm, each hour-long episode features them in conversation with a contemporary artist, curator or collector. Minus the big words and conceptual framing devices typical of art world chatter, Tovey and Diament give their guests a place to talk in depth about what they do. Launched in August 2018, what began as a lark has blossomed into more than 150 episodes, one million downloads, listeners in over 60 countries, and most recently, a book to recap the journey thus far.

Keen to hear more, we reached Robert in Margate, England, as he was putting the finishing touches on a new exhibition, curated by who else? His partner in art, Russell.

AGOinsider: For those who don’t know the story, how did you both get into art? Was there a lightbulb moment?

Diament: Russell got into art through cartoons. He loved them as a kid and then as an adult discovered Roy Lichtenstein and realized you could still like cartoons as a grown-up. He then got really into the YBA movement here in London in the '90s – artists like Damian Hirst, Tracy Emin and Sarah Lucas. In my teens, I got really into Frida Kahlo. I borrowed Hayden Herrera’s biography from my high school library in 1994, but it wasn't until later, when the Madonna documentary came out, that I finally saw any of her works. They just didn’t exist in England, even as reproductions.  And that’s when it all came to life for me – this idea of surviving through art. My brother had died when I was turning 14 and his death left me very confused. But those works really helped me see that through art and music and creativity, we survive.

AGOinsider: Why did you decide to do a podcast?

Diament: It was a mistake, a lucky moment. I volunteered to do an interview for a podcast about the gallery I work at, and they asked me to bring someone. So I called Russell because he had bought some prints from us, and after the first 10 minutes, it was just him and I talking to each other – the hosts couldn’t get a word in. That aired, our mums heard it, and they loved it. That was the first time they understood how and why we loved art – until then it was a strange obscure world. And it was they who suggested we do our own show, like a diary. We did four episodes, and had 15,000 listeners right away and it just grew and grew and grew.

I think the reason it’s important and has worked is (A) we didn’t deliberately mean to do it, (B) we worked it out as we went along, even choosing the title in the middle of the first episode and (C) we’ve been a 100% ourselves – despite Russell being well-known, and me having a career in the gallery world – we’ve never been fake and have only ever invited people we love and admire. It’s a portrait of people captured in audio – so even if you don’t like their art, you might still enjoy listening to the human. 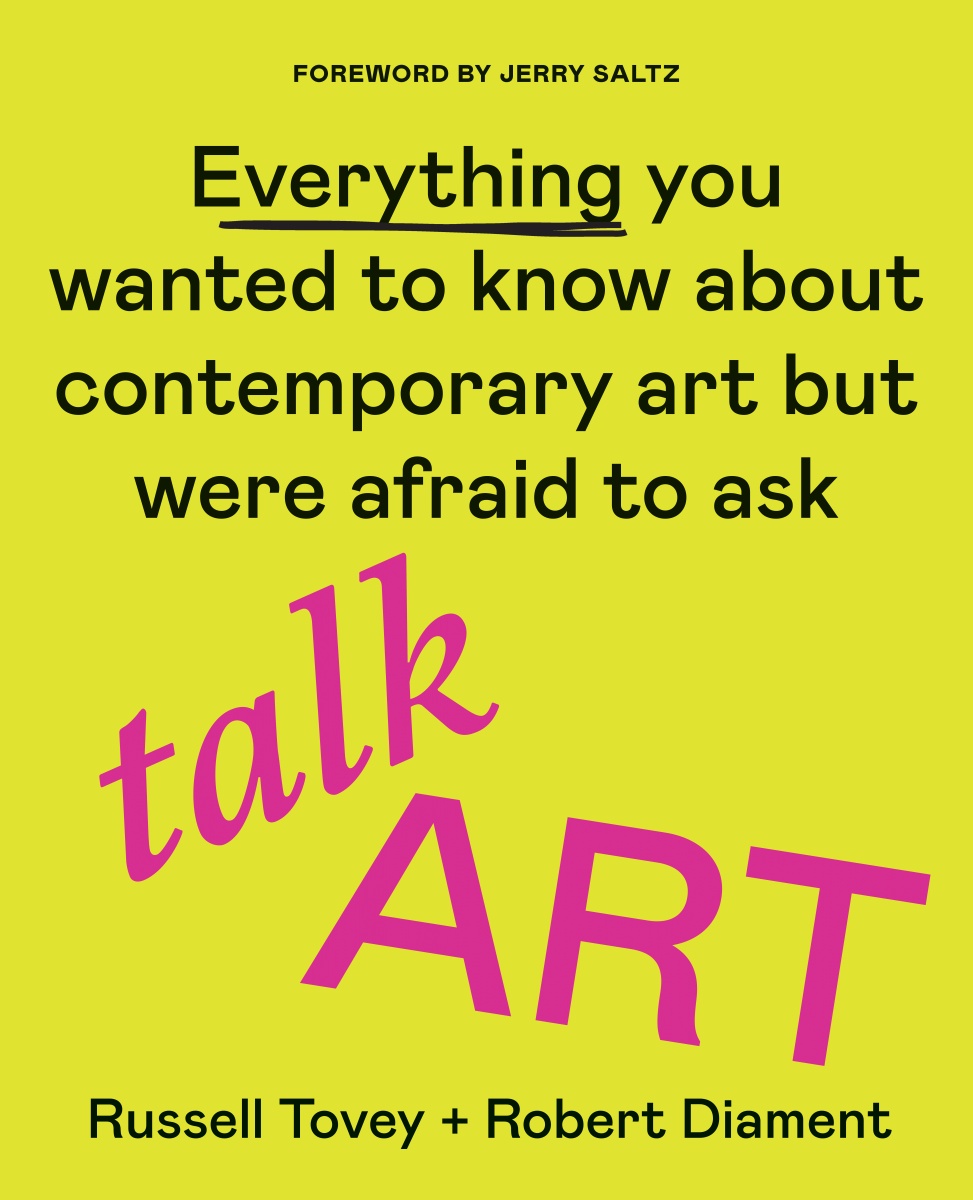 AGOinsider: Why are people afraid to ask about visual art? Why does it, among all the art forms, retain the stigma of pretension?

Diament: I remember thinking when I was making music that I liked it because it was the most accessible art form in many ways. It connects you in a visceral and intimate way to someone else. It’s similar to podcasting actually, in the sense that through your ears, you get a very private, very physical connection to the singer, to the speaker, to the band. Theatre is the same; people can project onto actors whatever they want, watching the telly together as a family. In the art world, there’s always been language in front of it, essays and a museum structure – all of which can make it feel quite alienating and impenetrable. I’ve certainly been intimidated in a gallery setting, too scared to write my name in the visitor book.

We wrote this book as a hobby, as a celebration of the thing we love, and what we’ve tried to do is speak in our own voices and not talk down to the reader. Occasionally, we do slip into that art language, and are guilty of using the word ‘practice’ even though it makes someone’s career sound like a doctor’s surgery – but we try our best to be good storytellers.

AGOinsider: Jerry Saltz, the notable critic, wrote the foreword for this book. Do you think more criticism is the answer to making art more accessible?

Diament: It’s about giving people more access points. Some critics are really good at that. We’re great admirers of the writer Olivia Laing, who also believes that art should be super-accessible. The language and passion she uses in her criticism, her love of weird details and intimate anecdotes, the political overtones, it gives you a very human portrait of artists. Makes you want to know why Dali kicked over the projector or care about someone as dry as Joseph Cornell. Jerry, in his book How to Be an Artist, is very direct. He’s a big personality, but if you go to the page, he’s so clear. The key is to not dumb it down – you can’t, else you risk doing a disservice to the art and the reader.

Diament: David Hockney! That’s a dream. Bridget Riley, a British artist I love. Thelma Golden. Julie Mehretu, who used to come to see my band play, would be an exciting chat. And Lynette Yiadom-Boakye – she has a show at Tate Britain that everyone should see.

Talk Art can be downloaded wherever you get your podcasts. Stay tuned to the AGOinsider for more conversation from the world of art.