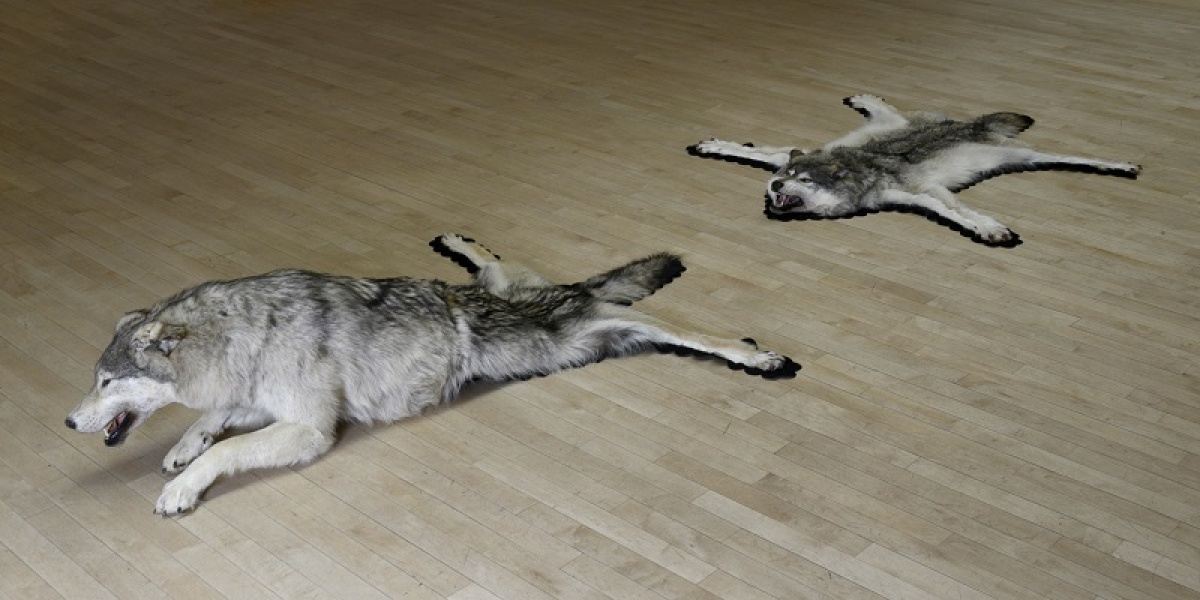 The multidisciplinary practice of Tlingit/Unangax̂ artist Nicholas Galanin is impossible to categorize. Through media as varied as sculpture, carving, taxidermy, video and performance, Galanin creates works that can be described as vessels of knowledge, reinforcing the sovereignty and complexity of his community. Recently acquired by the AGO – and the first of Galanin’s works in the AGO Collection – A Space Between Life and Death is a powerful statement on culture that gives viewers an up-close and personal encounter with two taxidermy wolves.

Galanin comes from a large family of musicians, master carvers and artists, all rooted in Sitka, Alaska. Embedded with a deep connection to his land and culture, Galanin’s work unpacks the intricacies of indigeneity, while boldly advocating for social and environmental justice. In addition to his work with taxidermy and video, Galanin’s carving practice includes cultural customary objects, petroglyphs and masks cut from anthropological texts. All of his pieces come with robust and multifaceted political commentary, touching on everything from the environmental impact of colonialism to the fetishization of Native culture.

The two wolves featured in A Space Between Life and Death are in juxtaposing states – one completely flattened and seemingly dead, the other in action and crawling forward. For Galanin, showcasing these two distinct states of objectification is a powerful statement on culture. He has noted that this work is about how “mainstream society often looks at Indigenous or Native American art through a romantic lens, not allowing a culture like my Tlingit community room for creative sovereign growth. The back half of this piece contains a captured trophy or rug to bring into the home, while the front continues to move. It is sad and the struggle is evident.”

Art by Nicholas Galanin has been included in the Whitney, Sydney, Honolulu and Venice Biennials and has been widely exhibited by many international institutions. A Space Between Life and Death is his first added to the AGO Collection—also making him the first contemporary artist of Tlingit descent to enter the collection. In addition to his thriving art practice, Galanin is rolling out a music career, having recently inked a record deal with Sub Pop Records and planning for an album release at the end of this month.

Galanin joined Wanda Nanibush, AGO Curator, Indigenous Art, for a Curators' Circle conversation on April 13 about A Space Between Life and Death and his body of work at large. Check out their discussion below.