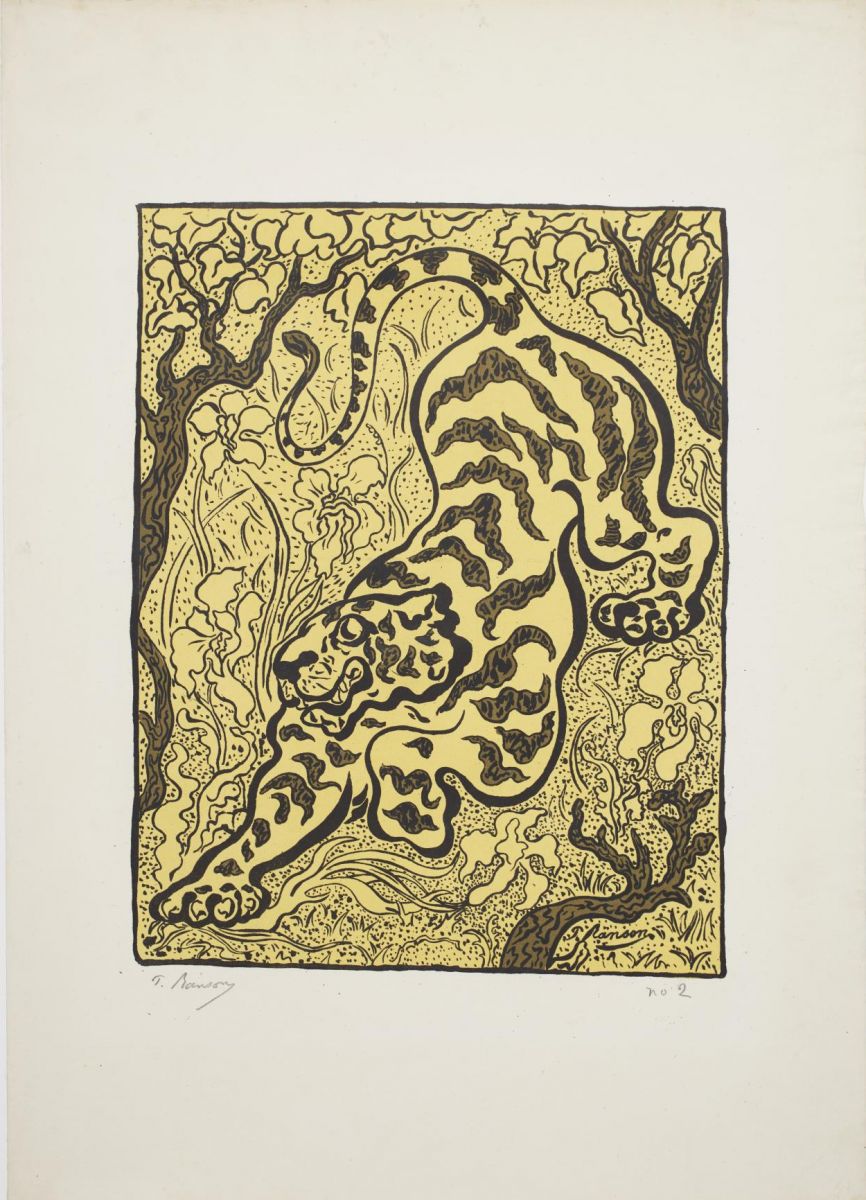 February 1, 2022, marks the beginning of the Lunar New Year and, according to the Chinese zodiac, the year of the tiger. Among the 12 zodiac signs, each one an animal, tigers represent the third year of the 12-year cycle in the lunar calendar.  In the Chinese community, tigers are considered the king of all beasts on Earth. Symbolizing power, strength and protection, it is not unusual to see the animal commonly used as a totem, motif or symbol in art. Throughout centuries, tigers have appeared in a magnitude of Asian art including traditional ink drawings, woodcuts, paintings, embroideries, sculptures and more.

In celebration of this new zodiac cycle, we are spotlighting Tigres dans les jungles (1893) by French artist Paul ÉlieRanson [1864–1909], an artwork from the AGO Collection that illustrates the animal.

Tigres dans les jungles (1893) depicts a fierce tiger surrounded by foliage in a three-colour lithograph. By far Ranson’s most famous print, it was featured in the first l’Estampe Originale print portfolio published André Marty. Included in the first iteration were gifted artists and printmakers associated with the Nabi School, , where Ranson was a founding member. The portfolio contained prints that celebrated the artistic and social potential of printmaking in the fin de siècle period in Paris. From the 2nd edition of the portfolio, with its striking lines, colour and animal motif, Ranson’s tiger lithograph stood out among the print works during that era.

In this work, Ranson drew inspiration from Japanese prints. He adopted the tiger motif, with its dynamic pose, from Japanese woodcuts by artists Kitagawa Utamaro and Katsushika Hokusai whose work was available in Paris at the time and had a discernable influence on French artists. Ranson’s use of bright canary yellow stems from pure, flat colours found in Japanese printmaking and the sweeping lines are reminiscent of calligraphic styles commonly featured in Asian ink drawings. Tigres dans les jungles marked a key moment in the story of the development of late nineteenth-century colour printmaking. By the 1890s, thanks to artists like Ranson and Édouard  Vuillard, colour lithography was known as more than an advertising medium, being sold and collected as stand-alone works of art.

As we close our spotlight, with Lunar New Year just around the corner, see if anyone around you has a tiger as their zodiac sign. And alert them that it’s their year to shine. Just like tigers in ancient Asian culture, they are known to be fearless, strong, ambitious and full of passion.

For the latest art news from inside the AGO walls and beyond, sign up to AGOinsider to get it straight to your inbox.