Mammalian Diving Reflex is a Toronto-based research-art atelier, lead by artistic and research director Darren O’Donnell. Social engagement is at the core of the group’s practice with their focus in recent years expanding to concentrate on collaborations with local youth. Mammalian's art facilitates encounters between groups and people who would not ordinarily interact, a practice they refer to as “social acupuncture.”

Mammalian Diving Reflex's work for the AGO is entitled The AGO Youth Receptiveness Assessment Initiative. This project assessed the Gallery based on youth-engagement principles designed by Mammalian. The initiative’s aim was to examine “the openness of the AGO to unusual and innovative ways of including and engaging youth.” Mammalian intended this project to foster friendships between local youth and AGO staff, transcending the bureaucratic structure that often divides these two groups. Mammalian Diving Reflex worked in collaboration with the Torontonians, and the AGO Youth Council. This team developed a series of research questions and designed a series of research moments in advance of the residency, which they used to conduct interviews with AGO staff and local community members. Mammalian Diving Reflex then presented their findings in a report presented to the AGO and the public. 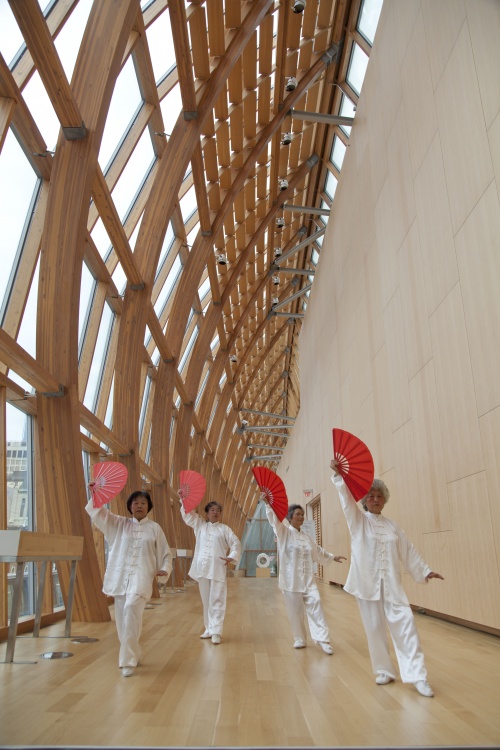 Energy Dispersion for the Attraction of Good Spirits (2014) began Mammalian Diving Reflex's process of engaging the local community for their residency work. Undertaken in advance of their residency, Young Mammals Director, Annie Wong, coordinated this Tai Chi performance held throughout the AGO galleries. Planned to coincide with Toronto's Fourteenth Annual Chinatown Festival – July 19 and 20, 2014 – one goal of the project was for the collective to strengthen ties with AGO’s neighbourhood. Over 30 performers from four local Tai Chi groups performed. The four groups practiced simultaneously in various galleries, allowing visitors to encounter multiple Tai Chi performance styles. The project was intended to invite good spirits into the AGO in order to integrate the energies of the neighbourhood with the building’s energy.

In the McEwen Gallery from Wednesday, December 3, 2014 to February 8, 2015, Mammalian Diving Reflex presented a selection of recent video works including High School Health (2014), and Sleeping with Family (2014). Other public programs presented by Mammalian Diving Reflex included: Dare Night, Security Guards Just Want to Give You a High Five, What a drag, Counting Chickens, and A Very Basic Introduction to QCA.

Several Mammalians turned 19 during the residency. Celebrations abounded in January! Tenzin Chozin started working with Mammalian Diving Reflex in the summer of 2010, at the age of 14, and is one of the first Torontonians, a group of Parkdale youths Mammalian Diving Reflex works with to create performance, video and other cultural products, devise mentorship programs and build a network of artists, arts organizations and young people across the city. He has collaborated with Mammalian on over 20 projects, including Nightwalks with Teenagers (2011-2012), Producers of Parkdale (2012), How to Hook Up (2012-2013), AWKS (2013-2014) and many others. January 7 marks his 19th birthday. He’s been waiting 19 years for this, so we celebrated his first legal sip of alcohol and retired his fake ID. One day in the summer of 2010, Sanjay and Kathy, then 14 years old, met Darren, then 45 years old, at a local Burger King to collaborate on a video about being an artist. From then on the Torontonians were born, Mammalian Diving Reflex’s youth cohort and main artistic collaborators. Kathy and Sanjay have been working with Mammalian since and has collaborated on over 20 projects, including Nightwalks with Teenagers (2011-2012), Producers of Parkdale (2012), How to Hook Up (2012-2013), AWKS (2013-2014) and many others. On January 26 and January 27 they turn 19.  They’ve been waiting 19 years for this so we celebrated their first legal sip of alcohol.