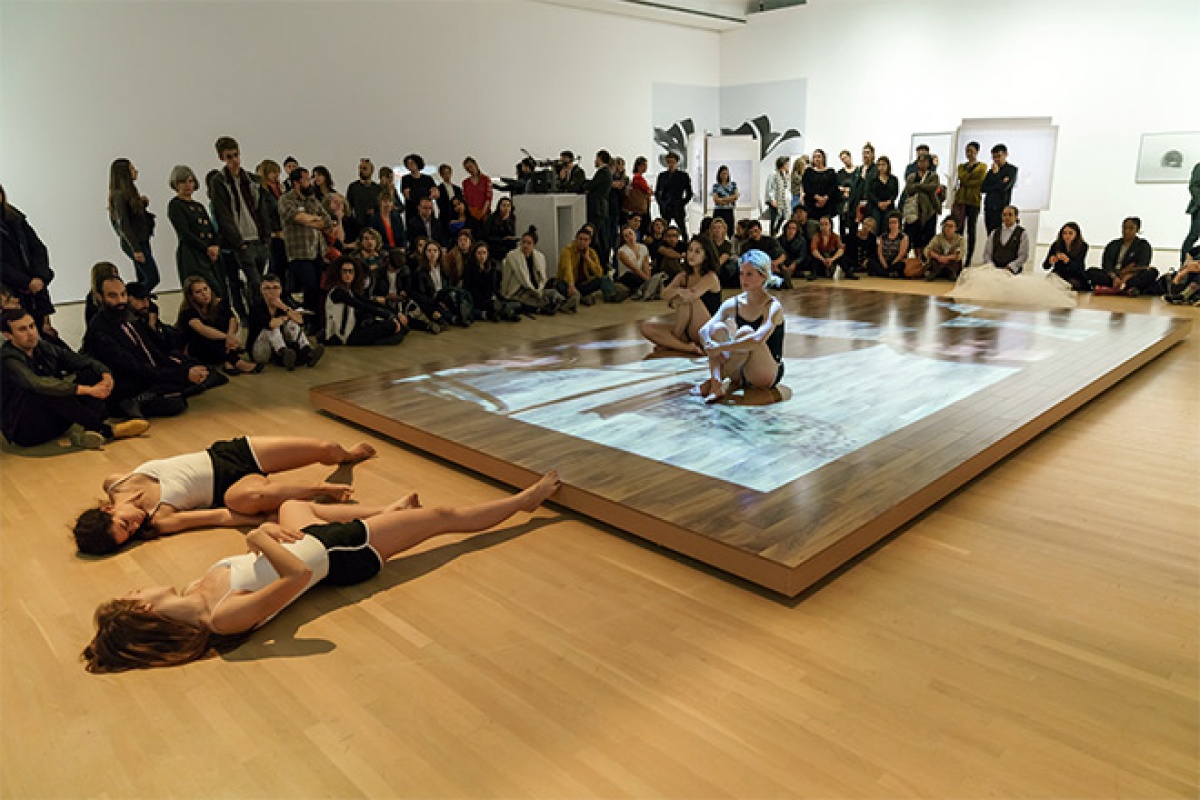 “Dancers perform specialized labour and over many years they obtain a deep understanding of the body. I am compelled by the body as a way to know – as a way to transmit knowledge.”

Tanya Lukin Linklater is an Alutiiq artist and choreographer who combines dance, music and text into moving explorations of space, bodies and relationships. While in residence at the AGO, Lukin Linklater worked with dancers inside the exhibition Rita Letendre: Fire and Light to create a performance, titled Sun Force, in response to Letendre’s powerful paintings.

Visitors to the AGO viewed Lukin Linklater and her collaborators in process through a series of open rehearsals inside the exhibition that will take place during gallery hours. The final performance was at 7 pm on Friday, August 18.

On Sunday, August 12, 2017 at 2 pm, Lukin Linklater was joined by Wanda Nanibush, Assistant Curator of Canadian and Indigenous Art at the AGO, for a conversation about Letendre’s work and Sun Force. Click here for more information.

Tanya Lukin Linklater's performance collaborations, videos, and installations have been exhibited nationally and internationally. She is compelled by relationships between bodies, histories, poetry, pedagogy, Indigenous conceptual spaces and Indigenous languages, and institutions. Her work has been exhibited and performed at EFA Project Space + Performa, New York; the Museum of Contemporary Art Santiago, Chilé; Western Front, Vancouver, and elsewhere. In 2016 she presented He was a poet and he taught us how to react and become this poetry (Parts 1 and 2) at La Biennale de Montréal - Le Grand Balcon curated by Philippe Pirotte.

In 2017, as a member of Wood Land School alongside Duane Linklater and cheyanne turions with Walter Scott, Tanya will participate in the slow exhibition, Kahatènhston tsi na’tetiátere ne Iotohrkó: wa tánon Iotohrha, Drawing a Line From January to December. For the duration of 2017, SBC Gallery will be renamed and operate as Wood Land School. Wood Land School also participated in Under the Mango Tree - Ulterior Sites of Learning, a gathering for documenta14 in Kassel.

Tanya's poetry and essays have been published in C Magazine, Yellow Medicine Review, and in publications by Whitney Museum of American Art Independent Study Program, among others. Tanya studied at University of Alberta (M.Ed.) and Stanford University (A.B. Honours) where she received the Mellon Mays Undergraduate Fellowship and the Louis Sudler Prize for Creative and Performing Arts. She was awarded the Chalmers Professional Development Grant in 2010 and the K.M. Hunter Artist Award in Literature in 2013.

She originates from the Native Villages of Afognak and Port Lions in southern Alaska and is based in northern Ontario, Canada.