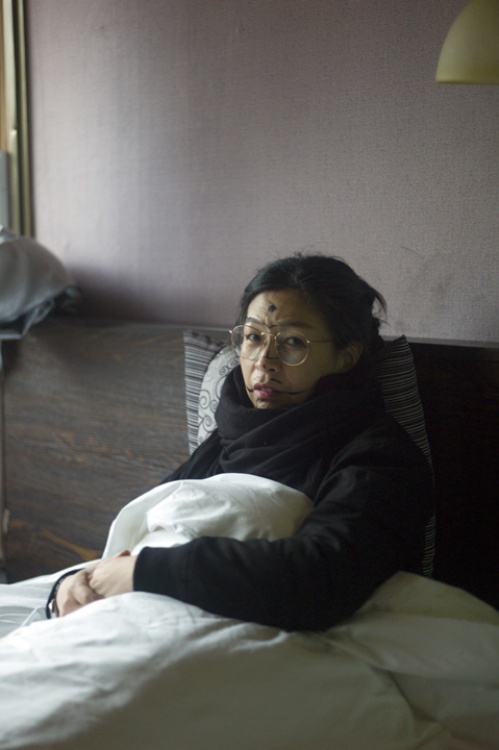 Haegue Yang (b. 1971, Seoul, South Korea) lives and works between Berlin and Seoul. She is renowned for her multifaceted works that vary in form from collage to kinetic sculpture, perceptively evoking historical and contemporary narratives of migration, displacement and cross-cultural translation. Using her own language of abstraction, Yang extraordinarily transforms ordinary and domestic materials—such as venetian blinds, light bulbs, drying racks, knitting yarn and bells—into deeply allegorical, meticulously constructed installations and sculptures that dissociate these materials from their somewhat limited original contexts. The artist’s installations often constitute immersive environments that provoke the senses with a diversity of scents, sounds and textures, evoking a notion of movement in multiple dimensions of the physical, emotional and socio-political.

Yang was the recipient of the 2018 Wolfgang Hahn Prize and is currently a Professor at the Staedelschule in Frankfurt am Main. Her artwork is part of the AGO’s permanent collection, and is included in the permanent collections of the Museum of Modern Art, New York; M+, Hong Kong; National Museum of Modern and Contemporary Art, Seoul; Tate Modern, London; The Solomon R. Guggenheim Museum, New York; and The Walker Art Center, Minneapolis. Her work has been the subject of numerous monographs, such as Haegue Yang: Anthology 2006–2018: Tightrope Walking and Its Wordless Shadow (2019); Haegue Yang: ETA 1994–2018 (2018); Haegue Yang – VIP’s Union (2017); and Haegue Yang: Family of Equivocations (2013). Forthcoming projects in North America include Handles at the Museum of Modern Art, New York (October 2019) and In the Cone of Uncertainty at the Bass Museum of Art, Miami (November 2019).