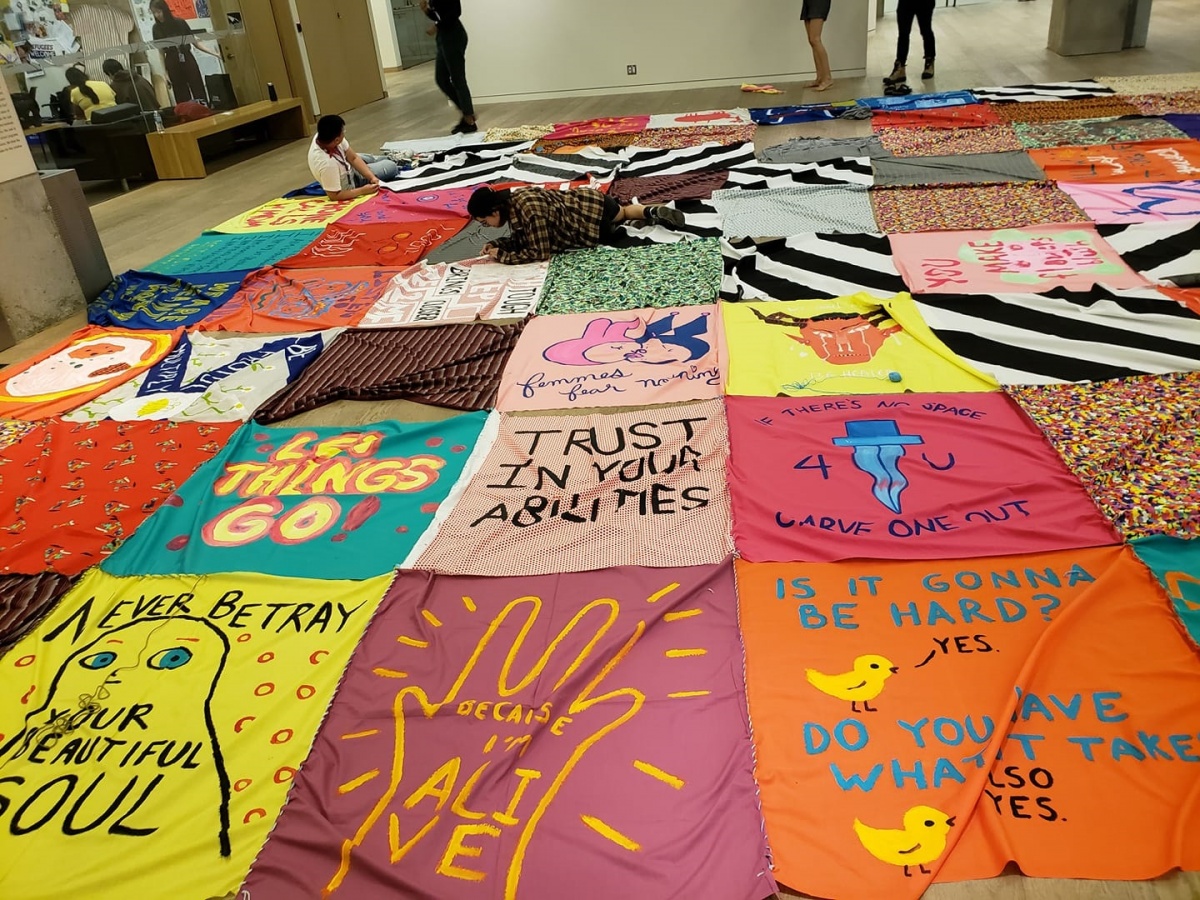 The exhibition is located in the Nook by the Weston Family Learning Centre.

This installation documents the exhibition This Mountain Loves You, created by the AGO Youth Council in collaboration with Mexican/Canadian artist Ani Castillo. Shown in Walker Court from July 15–22, 2018, This Mountain Loves You is a tribute to and a recreation of Leonard Knight's Salvation Mountain, a large-scale folk art site in the southern California desert. Over a seven-week period, messages of self-love and empowerment were hand-painted and stitched together to counter and resist the current climate of Trump-era politics.

Ani Castillo was born in Guadalajara, Mexico. At a young age, she became a successful blogger which gave her the opportunity to work as a Cartoonist for Mexican newspapers and TV. One fateful day, through Myspace, she met her now husband and moved to Canada to live with him. The adventure was thrilling but challenging, since she had to leave her people behind, speak in a new language and re-start her career from scratch. All while becoming a mother, redefining her identity and working hard towards overcoming her social anxiety. Her work has been published in Mexican and Canadian newspapers and exhibited in galleries around North America. The humanistic nature of her work has opened the doors to partnering with institutions like Mental Health America, Doctor Without Borders and the Canadian Centre for Addiction and Mental Health. Ani lives in Toronto with her two daughters and her husband.

Representing a diverse group of youth in Toronto, the AGO Youth Council is run by youth ages 15-24 who are interested in art and the relationship between young people and art institutions. Through a lens of social practice, the program focuses on community building, experiential pedagogy, and contemporary art practices working collectively to initiate programming by youth for youth. Collaborations with artists result in exhibitions, public art projects, interventions, large-scale events, drop-in programs, field trips, walking tours and much more. Relationship building, eating together and sharing life experiences is also a large part of the program. The council accepts new members every fall, and applicants are selected after a group interview involving current members of the AGO Youth Council. Time commitment: one year.

ABOUT THE COMMUNITY GALLERY

The Community Gallery in the Weston Family Learning Centre is an exhibition and project space which provides a platform for artistic experimentation and dissemination. Focused specifically on the processes of making art, and those ideas that feed into contemporary artistic practice, the gallery seeks to take risks and push the boundaries of how work is traditionally represented within formal institutions. The space draws also on the voices of those groups, regardless of age, sex, profession, and socio-economic constraints, who are at once represented and marginalized within normal institutional channels. In doing so, the Gallery steps away from conventional definitions of what is meant by the word "Community", seeking new interpretations and evolutionary paths for the possibilities of art-making. The Community Gallery is comprised of the main space and a smaller space called The Nook.