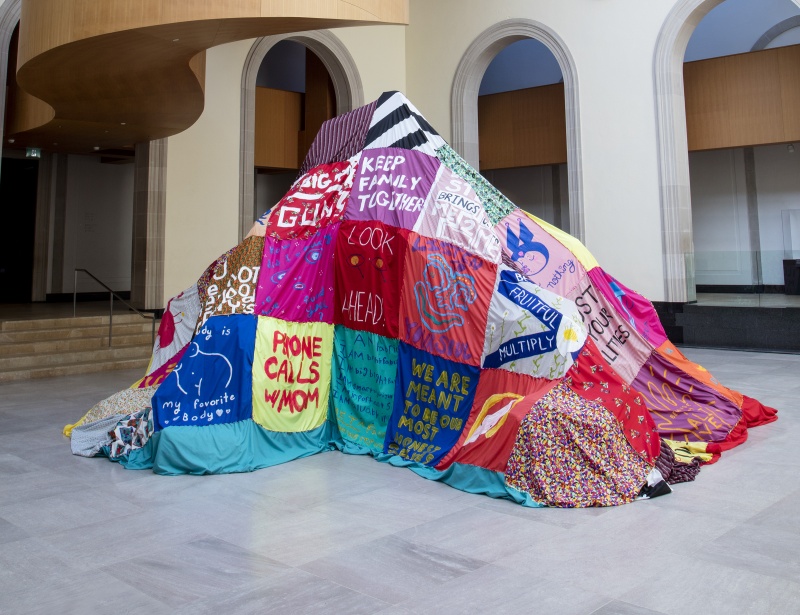 This Mountain Loves You, Ani Castillo in collaboration with AGO Youth Council, 2018, installation view. Image by the AGO.

This Mountain Loves You is a tribute to and recreation of Leonard Knight's “Salvation Mountain”, a large scale folk art environment located in the desert of Southern California. Created by the AGO Youth Council in collaboration with Mexican/Canadian artist Ani Castillo whose cartoons and drawings depict themes of self-love and empowerment, the youth council drew on their own experiences and thoughts to generate positive messages for their own mountain. Over a 7 week period of time youth hand painted messages on brightly coloured fabrics and then stitched them together to create a large scale quilt, covering the surface of the mountain. Unveiled on July 14th at the annual youth party and on display in Walker Court for the week of July 15 - 22, This Mountain Loves You, aims to counter and resist the current climate of Trump era politics.

Ani Castillo was born in Guadalajara, Mexico. At a young age, she became a successful blogger which gave her the opportunity to work as a Cartoonist for Mexican newspapers and TV. One fateful day, through Myspace, she met her now husband and moved to Canada to live with him. The adventure was thrilling but challenging, since she had to leave her people behind, speak in a new language and re-start her career from scratch. All while becoming a mother, redefining her identity and working hard towards overcoming her social anxiety. Her work has been published in Mexican and Canadian newspapers and exhibited in galleries around North America. The humanistic nature of her work has opened the doors to partnering with institutions like Mental Health America, Doctor Without Borders and the Canadian Centre for Addiction and Mental Health. Ani lives in Toronto with her two daughters and her husband.