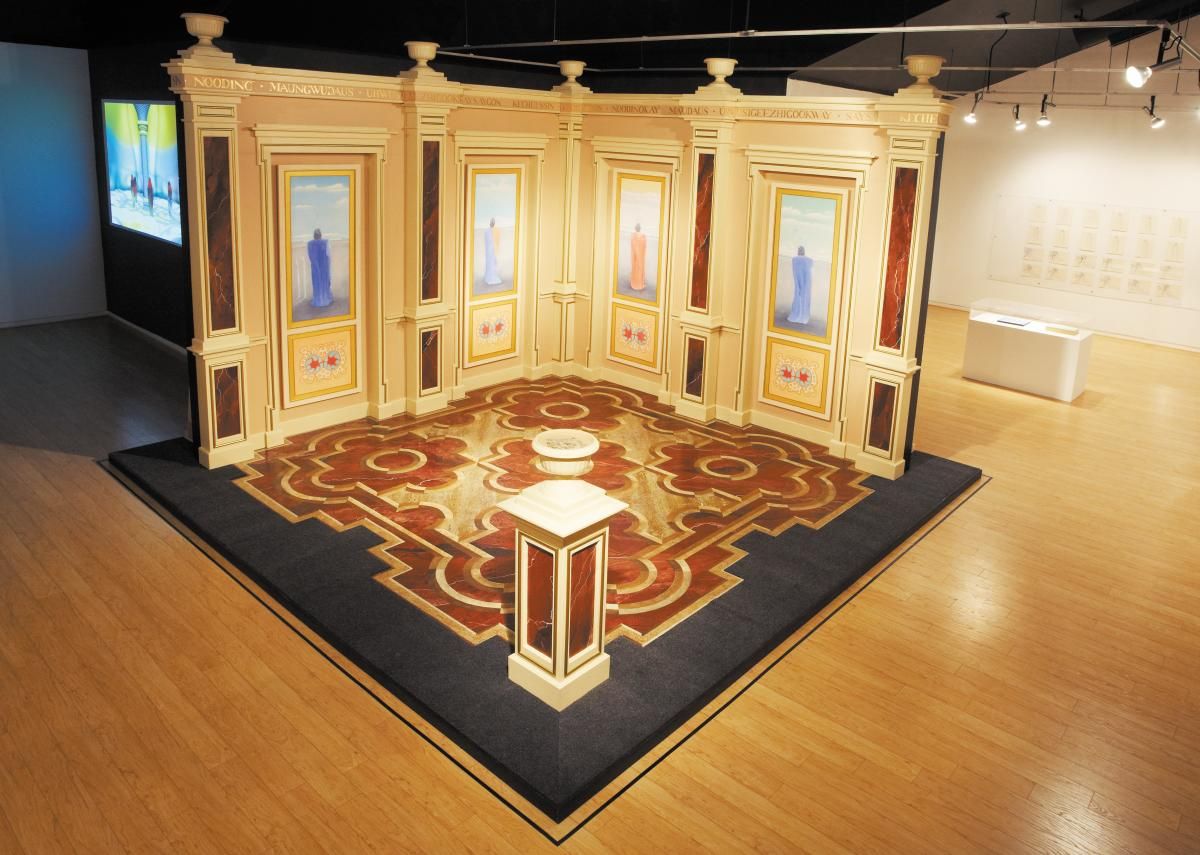 Robert Houle is one of the most influential First Nations artists to break into the contemporary art world. His work blends abstraction, modernism and conceptualism with First Nations aesthetics and histories. Houle went from residential school to art school to museum boardrooms and on to the art world stage as an artist, curator and writer.

Robert Houle: Red is Beautiful consists of over 90 large installations, paintings and drawings created between 1970 and 2021. Themes in the exhibition include Sacred Geometry, The Spiritual Legacy of the Ancient Ones, Beyond History Painting, The Aesthetics of Disappearance, Residential School Years, and Sovereignty.

Houle is a colorist working in oil and has painted an impressive body of work that challenges our understanding of Western and First Nations art history.

Works from 1970 to 1983 are marked by his exploration of abstract expressionists such as Jackson Pollock, Mark Rothko, Barnett Newman and Jasper Johns and the pure abstraction and geometry of Mondrian and Malevich. Houle brings an older Indigenous abstract tradition to this history and, in the meeting of the two, he emerges as a new voice in modern abstraction that values immediacy, gesture, the spiritual qualities of colour, piercing the canvas with organic materials, Anishinaabe geometry and Indigenous sacred belongings.

This exhibition shows iconic works, such as Kanata, a reworking of Benjamin West's The Death of General Wolfe, and Parfleches for the Last Supper, addressing his respect for Indigenous spiritual traditions.

As a curator, his first exhibitions began a brand new discourse on contemporary First Nations art. His work challenged audience expectations of what First Nations art looked like. Houle stayed independent from the trends and stereotypical cultural performances of the day.

Bravely, Houle also brought the residential schools era into sharp relief. His work Sandy Bay (1998-99) dealt with his own experience of being torn from his home. Later, in 2009, he began to deal with his memories of abuse in the school through a series of visceral drawings and paintings. Houle turns to the spiritual power of the ancient ones providing a new vision for an Indigenous future that holds the complexity of contemporary First Nations identity in its grasp.

This exhibition is a walk through fifty years of what matters to First Nations and Settler relations today with an artist who was always ahead of time.

Robert Houle (b. 1947, St. Boniface, Manitoba) is an Anishinaabe Saulteaux contemporary artist, curator, writer, critic, and educator. For more than fifty years, he has worked to advocate for First Nations artistic representation and sovereignty and has established himself as an essential force within the artistic community in Canada and around the world. Houle studied at the University of Manitoba, McGill University, and the International Summer Academy of Fine Arts in Salzburg, Austria, and for many years taught Indigenous Studies at the Ontario College of Art and Design. From 1977 to 1981, he was Curator of Contemporary Aboriginal Art at the Canadian Museum of History (formerly the Canadian Museum of Civilization). As a curator, he is also responsible for landmark exhibitions such as Land Spirit Power: First Nations at the National Gallery of Canada (1992).

Robert Houle - About the Artist

His artistic achievements have garnered him numerous awards and accolades, including the 2001 Toronto Arts Award for the Visual Arts; the 2015 Governor General’s Award in the Visual and Media Arts; and most recently, the 2020 Founder’s Achievement Award from the Toronto Friends of the Visual Arts. He has been awarded two honorary doctorates, one in 2014 from his alma mater, the University of Manitoba and a Doctorate of Laws from the University of Ontario Institute of Technology in 2016. Houle has also served on various boards and advisory committees, including those of the Art Gallery of Ontario, the Museum of Contemporary Art Toronto, The Indigenous Curatorial Collective, A Space, The Power Plant Contemporary Art Gallery, and the Native Canadian Centre of Toronto.