In the captivating photo series Wanted, artists Camal Pirbhai and Camille Turner repurpose authentic 18th-century fugitive slave ads printed in Canada, which featured detailed descriptions of the clothing worn by people who had resisted enslavement by stealthily running away. Descriptions of these outfits are reinterpreted in this photo series as high-fashion spreads that wouldn’t look out of place in a glossy magazine or on a billboard. In fact, one image from Wanted will be taking over a digital billboard on the north end of the Eaton Centre, overlooking Yonge-Dundas Square on July 3, lasting throughout the month. 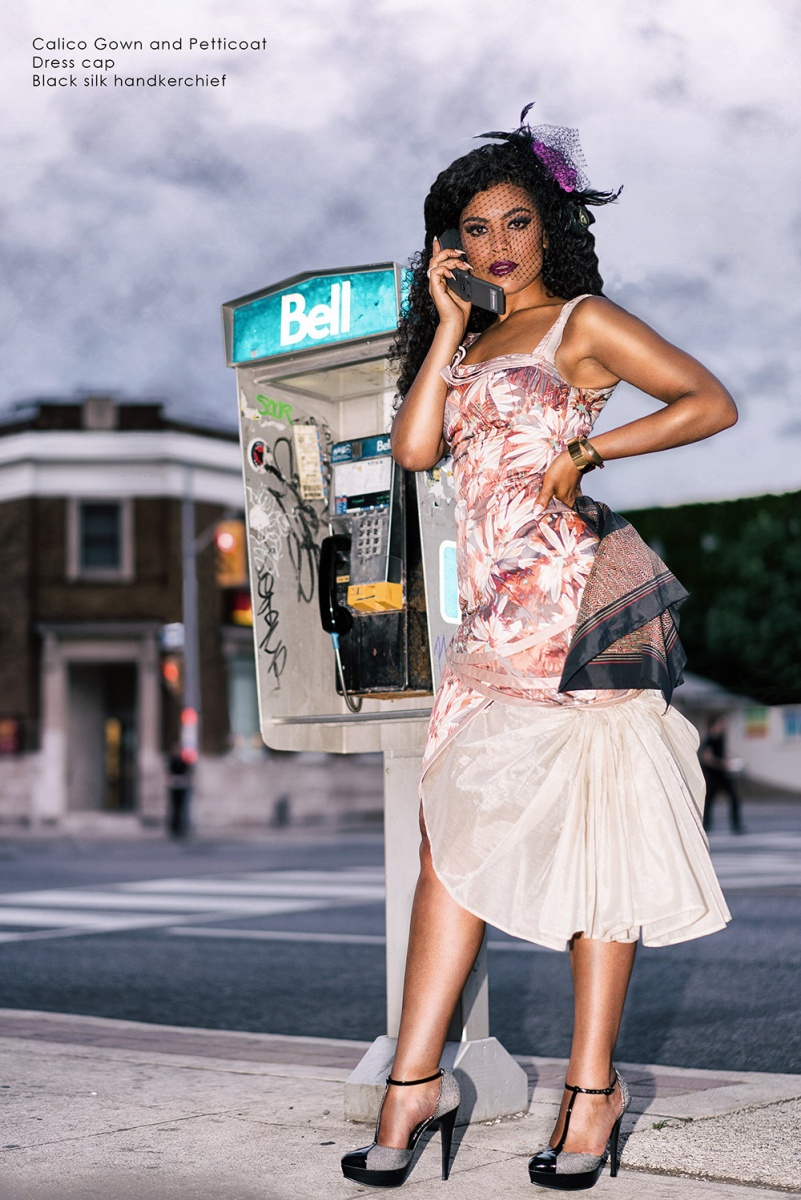 RUN away from Mr. GEORGE HIPPS on Thursday last, a Mulatto wench named BELL, this is to give notice, that any person or persons whatsoever who harbours the said Girl may depend that he will go to the utmost rigour of the Law. When she went away she had upon her a Callico Gown and Petticoat, a dress'd Cap, and a black silk Handkerchief.

RAN AWAY From the Subscriber, on Thursday the 31st Ult. a Negro Lad named CHARLES, and about 20 years of age, four feet four or five inches high, with a white mark on the right side of his forhead; speaks English and a little French and German; had on when he went away, a short grey jacket, and large linen trousers. Whoever will give information of him and put him again in my hands, shall have THREE GUINEAS Reward. 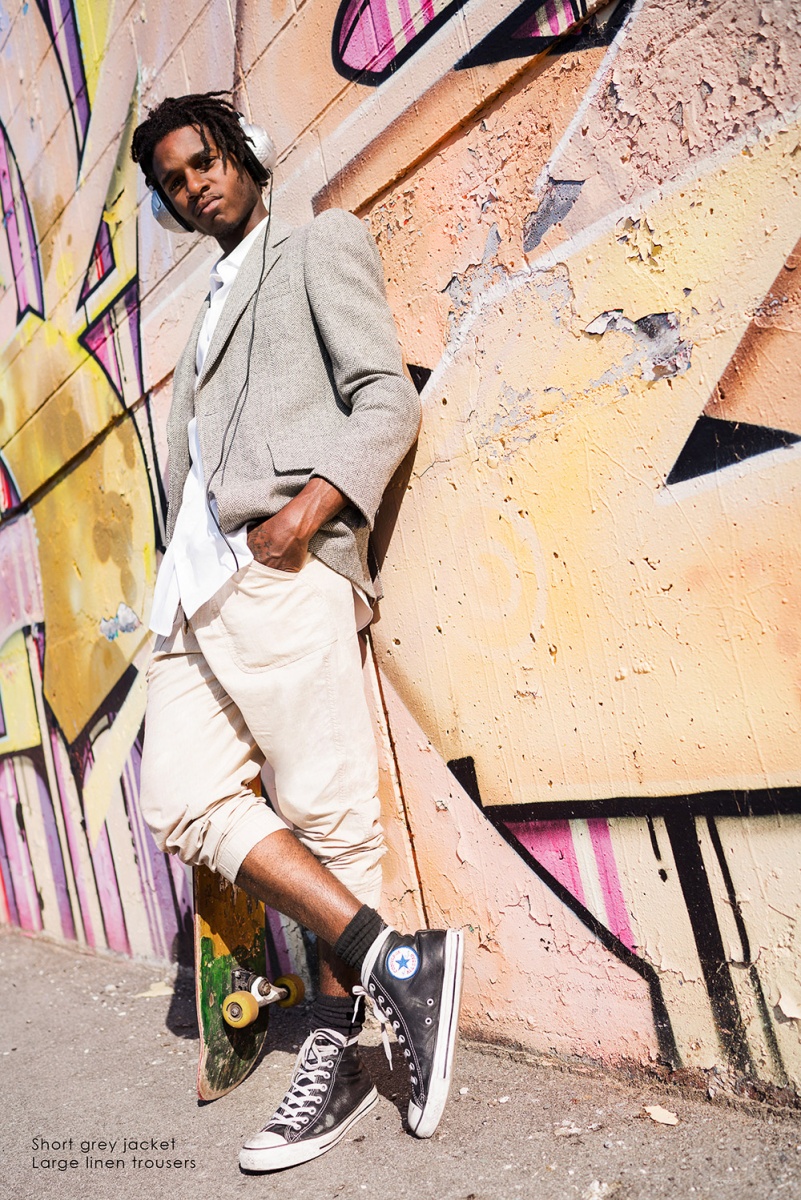 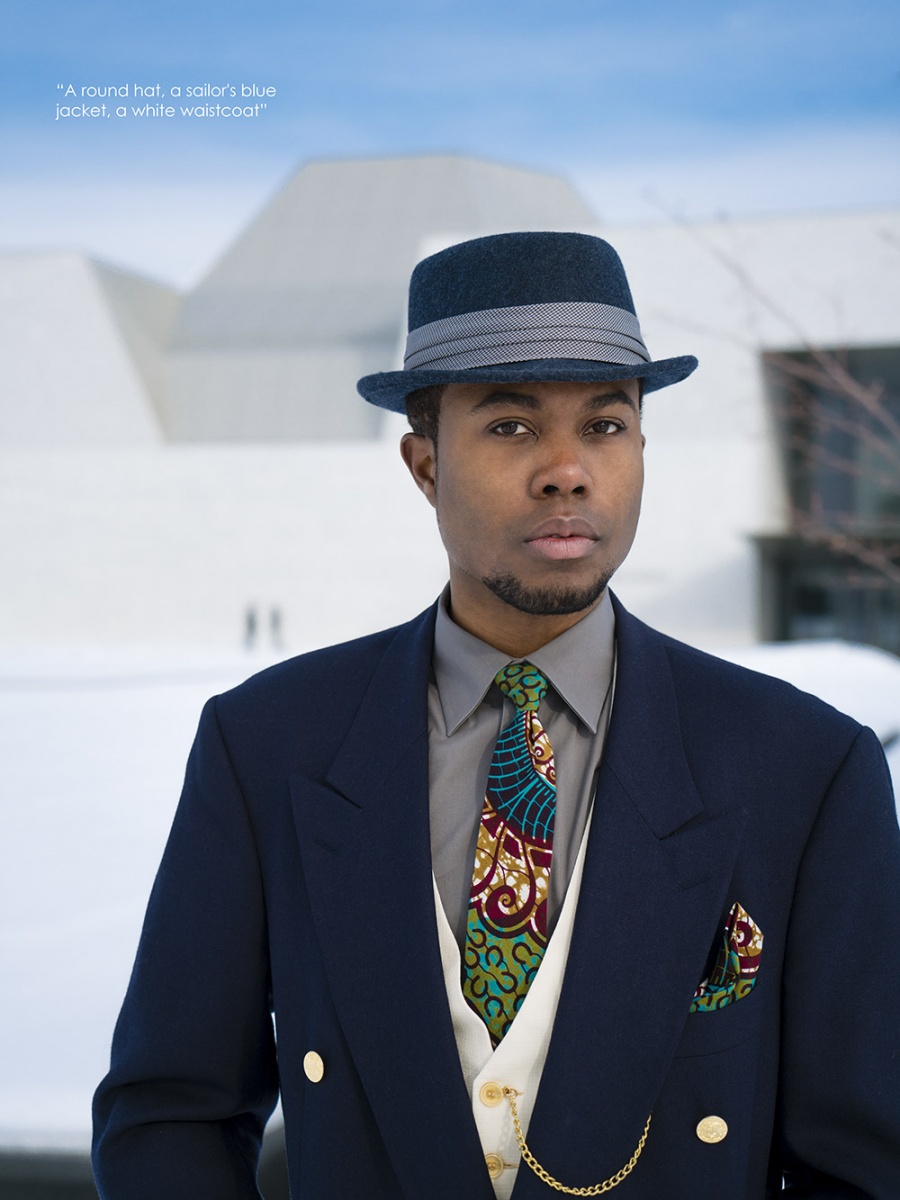 Run away from the Subscriber on Saturday morning, a Negro man named ISHMAEL, aged about thirty-five years, five feet eight inches high, black short curled hair, marked with the small pox, wants some teeth, and a joint to his left hand little finger; speaks English, a little French and Dutch; had on when he ran away a round hat, a sailor's blue jacket, a white waistcoat, blue trousers and no shoes, &e. It is supposed he will call himself a free Negro.

Whoever apprehends said Negro, and brings him to his Master, shall receive the promised Reward, and all reasonable Charges. 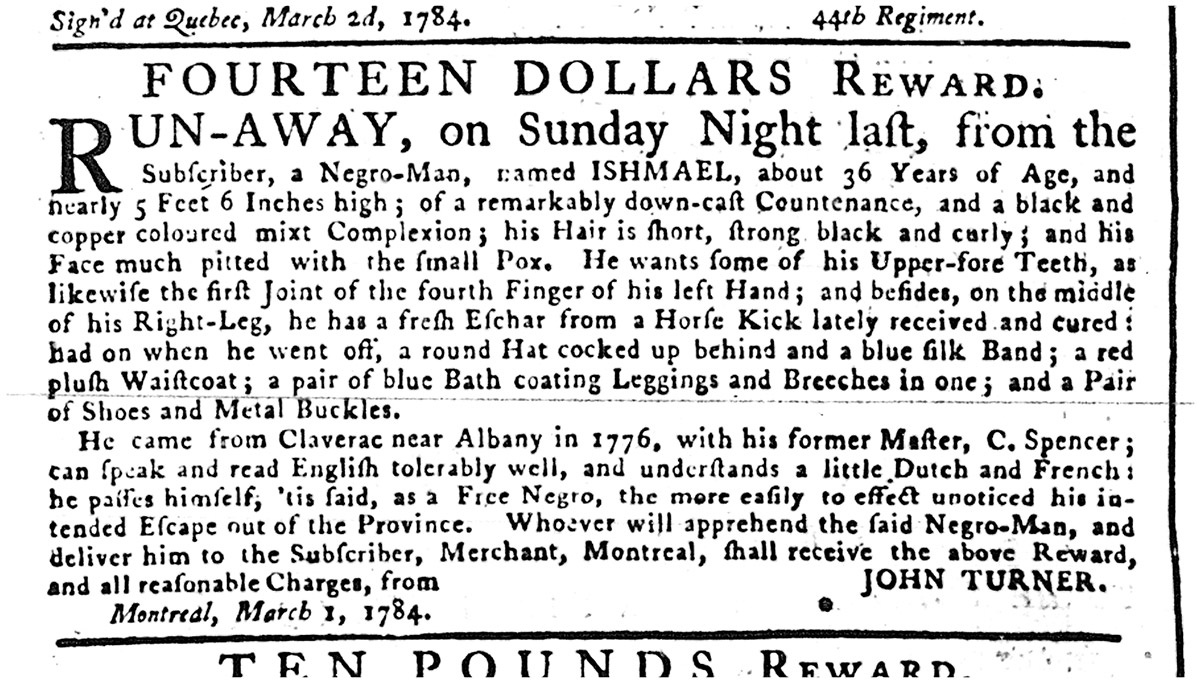 Run-away, on Sunday Night last, from the Subscriber, a Negro-Man, named ISHMAEL, about 36 Years of Age, and nearly 5 Feet 6 Inches high; of a remarkably down-cast Countenance, and a black and copper coloured mixt Complexion; his Hair is short, strong black and curly; and his Face much pitted with Small Pox. He wants some of his Upper-fore Teeth, as likewise the first Joint of the fourth Finger of his left Hand; and besides, on the middle of his Right-Leg, he has a fresh Eschar from a Horse Kick lately received and cured; had on when he went off, a round Hat cocked up behind and a blue silk Band; a red plush Waistcoat; a pair of blue Bath coating Leggings and Breeches in one; and a Pair of Shoes and Metal Buckles.

He came from Claverac near Albany in 1776, with his former Master, C. Spencer; can speak and read English tolerably well, and understands a little Dutch and French; he passes himself, 'tis said, as a Free Negro, the more easily to effect unoticed his intended Escape out of the Province. Whoever will apprehend the said Negro-Man, and deliver him to the Subscriber, Merchant, Montreal, shall receive the above Reward, and all reasonable Charges, from JOHN TURNER. 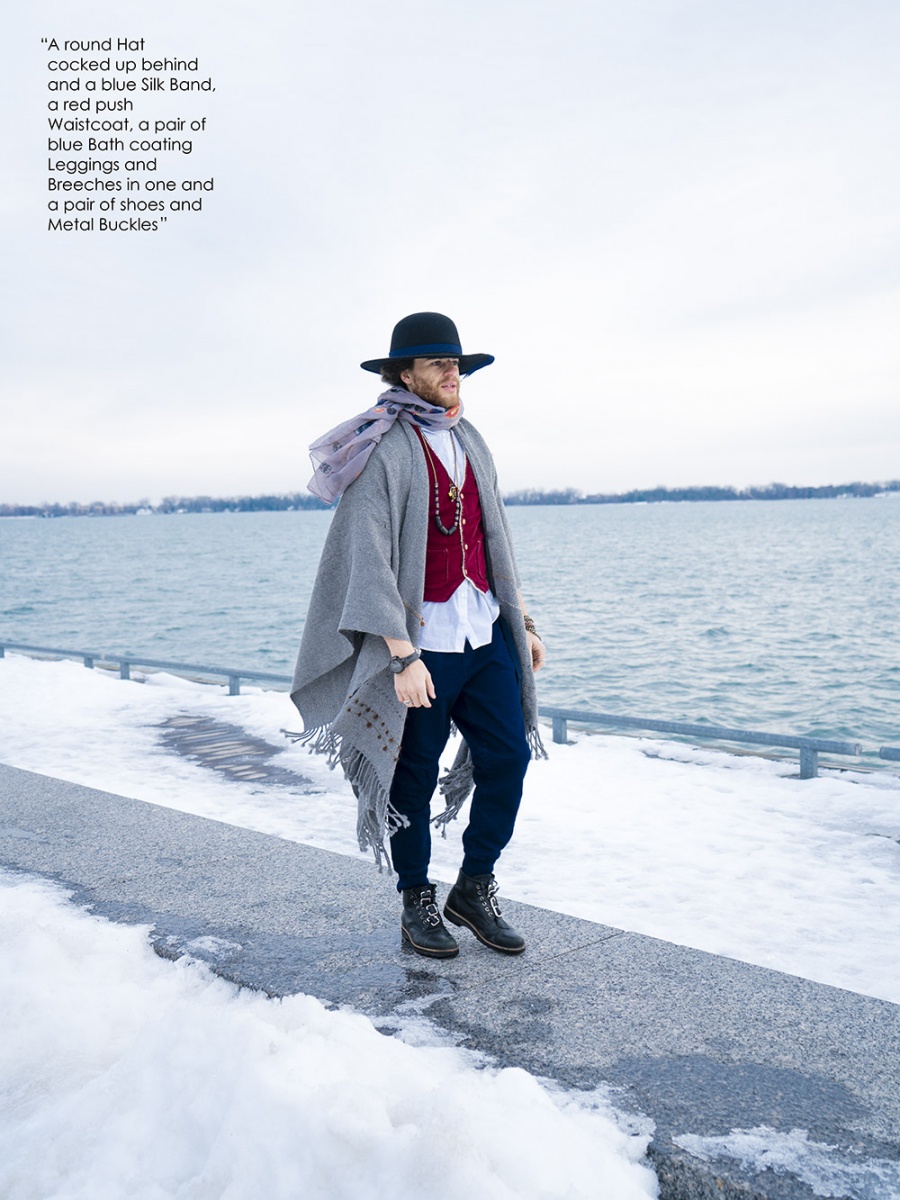 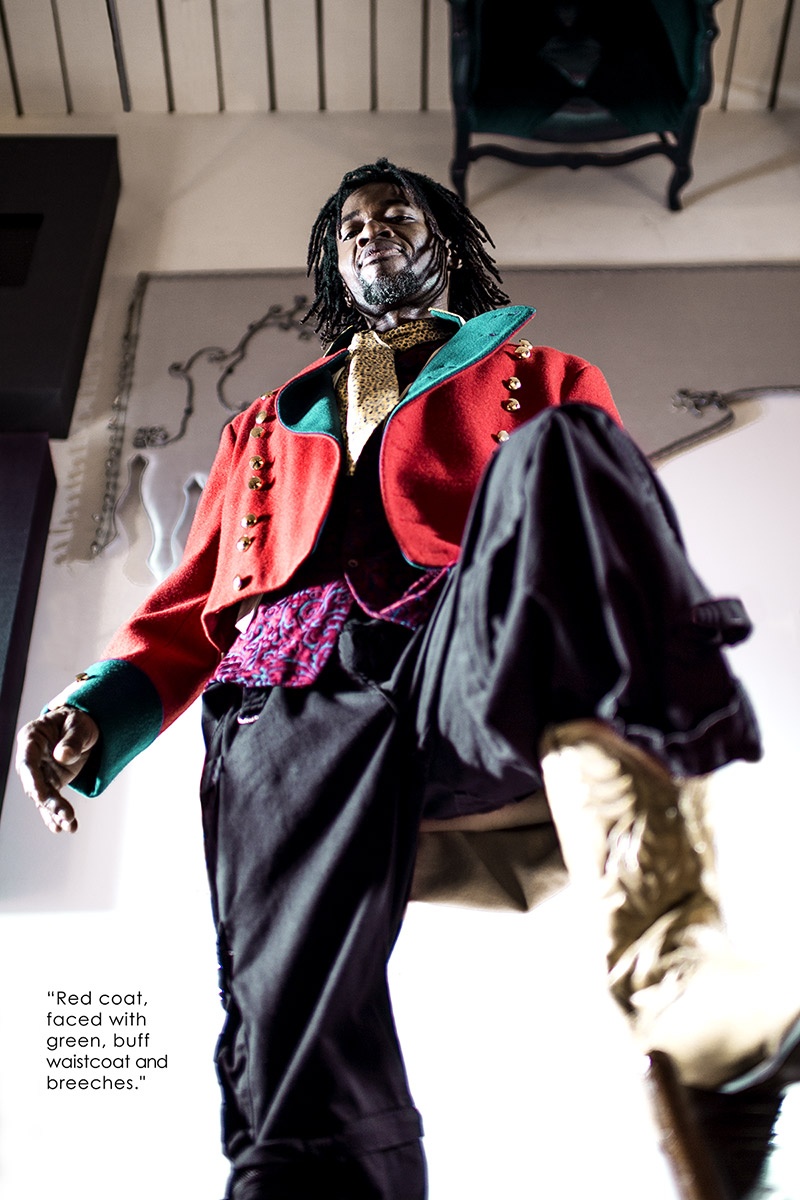 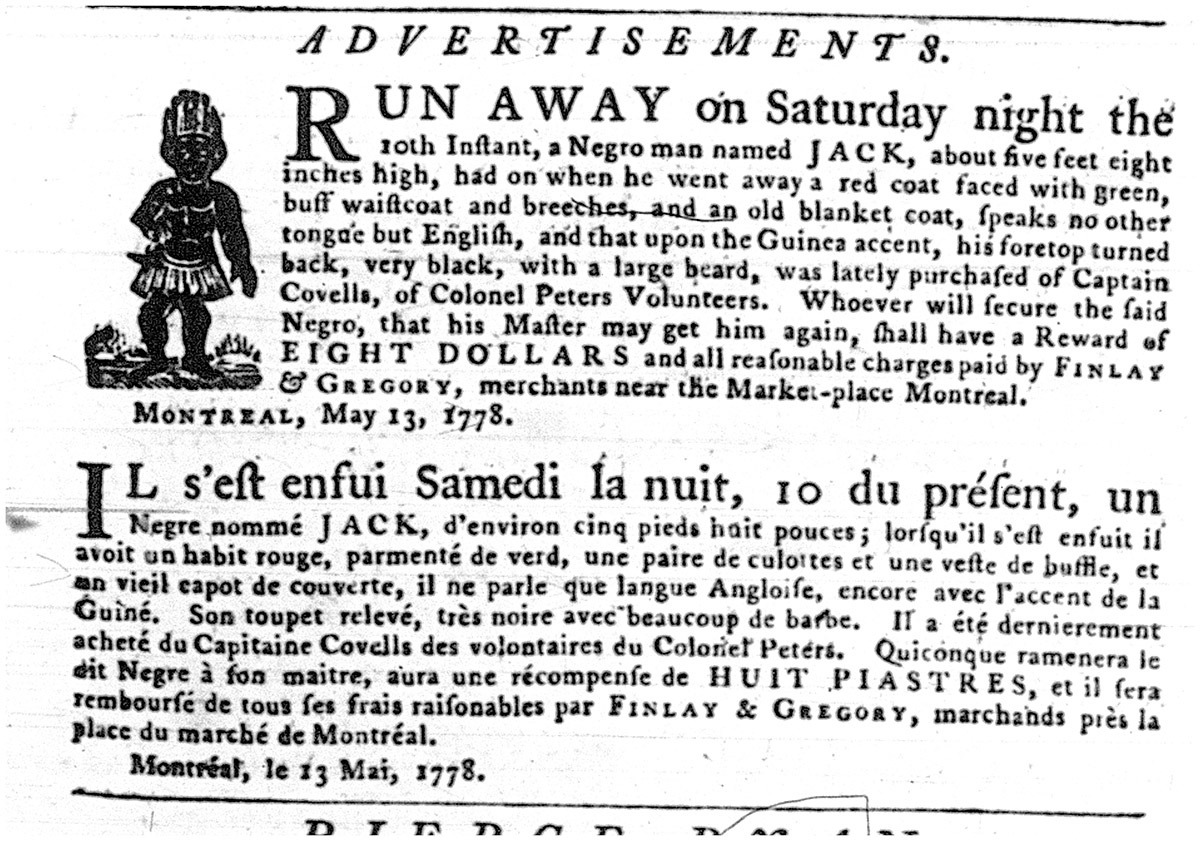 Run away on Saturday night the 10th Instant, a Negro man named JACK, about five feet eight inches high, had on when he went away a red coat faced with green, buff waistcoat and breeches, and an old blanket coat, speaks no other tongue but English, and that upon the Guinea accent, his foretop turned back, very black, with a large beard, was lately purchased of Captain Covella, of Colonel Peters Volunteers. Whoever will secure the said Negro, that his Master may get him again, shall have a Reward of EIGHT DOLLARS and all reasonable charges paid to FINLAY & GREGORY, merchants near the Market-place Montreal.

RAN-AWAY from the subscribers, between the hours of seven and eight o'clock yesterday evening, a NEGRO WENCH named BETT, about eighteen years old, middle stature, speaks English, French and German languages well; had on when she went away, a blue Kersey Jacket and Pettycoat, a dark cotton Cap with yellow strings, and an Indian Shawl round her neck, was big with child, and within a few days of her time.

Whoever will apprehend said Negress, and secure her return, shall be paid A REWARD of TWENTY DOLLARS, and all reasonable expenses.

Any person who may harbour or concel the said Negress, will be prosecuted to the rigour of the law, by JOHNSTON & PURSS. 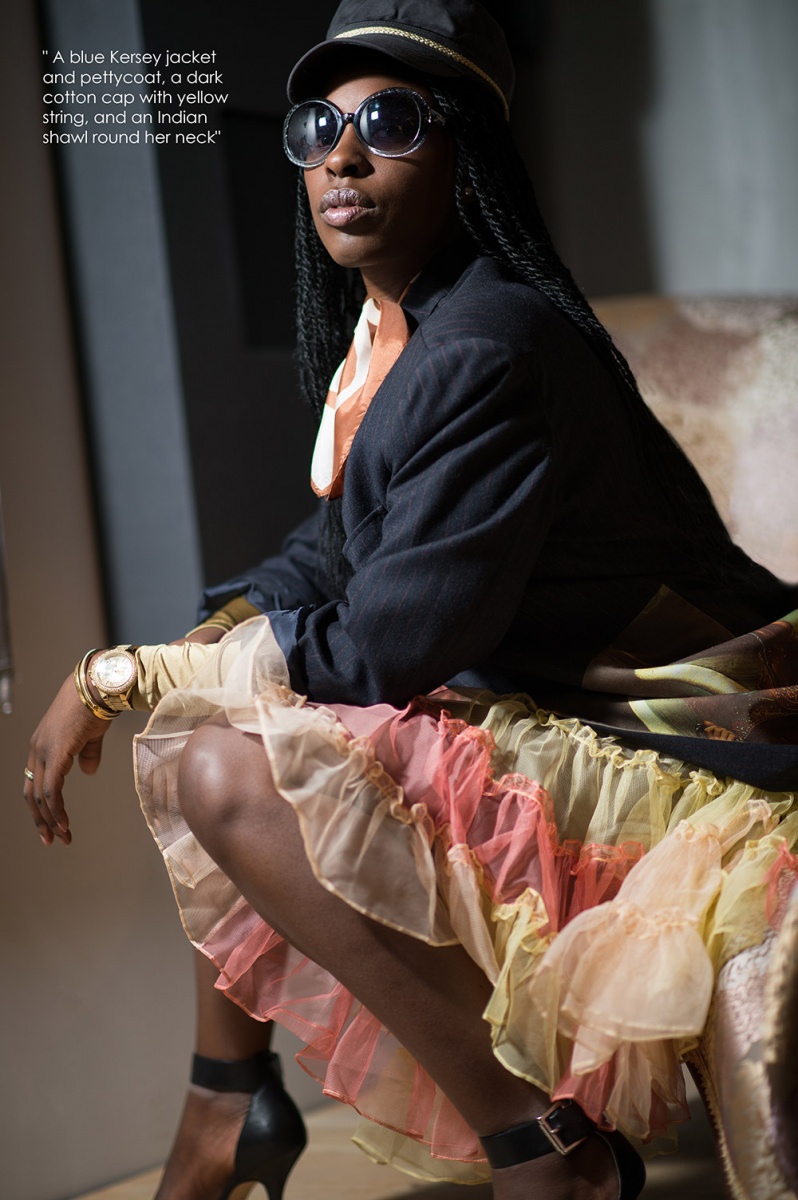 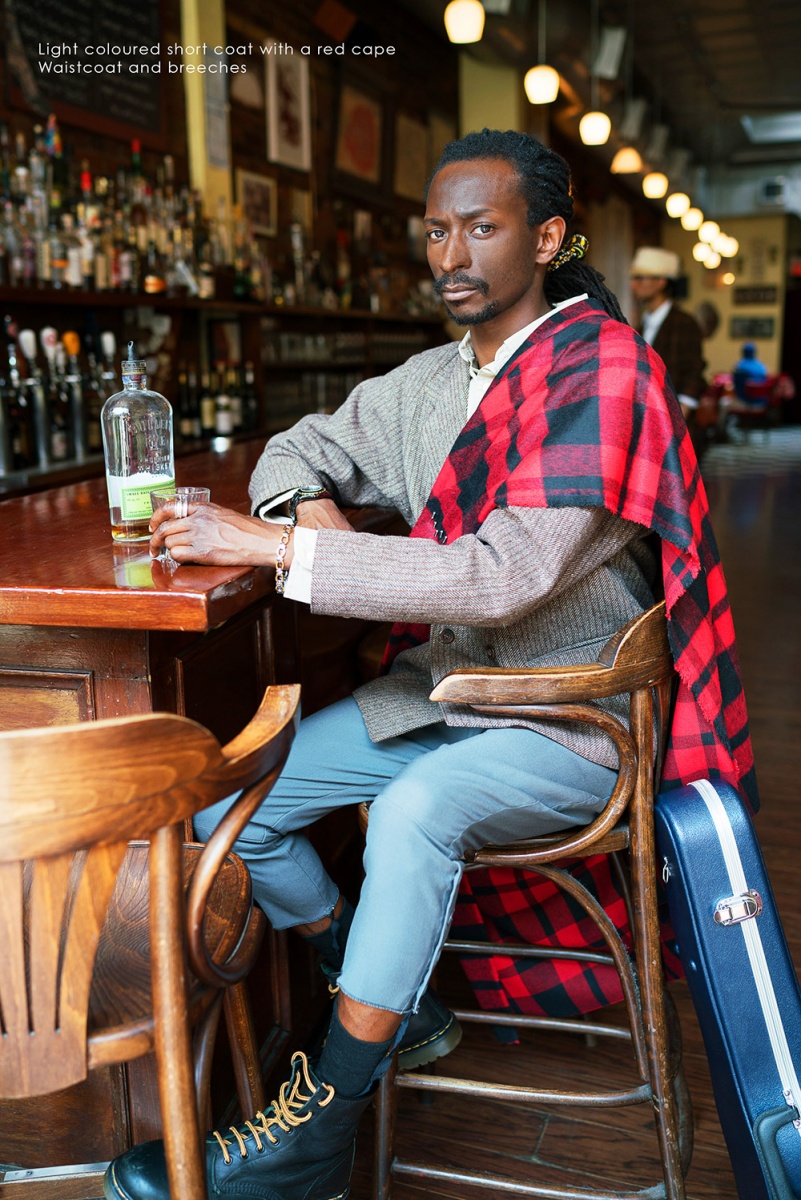 RUN AWAY from the Subscriber (on the Eighteenth Instant) a Negro man named Lowcanes, aged twenty-five Years, thin faced, and remarkable long hair tied behind, about five feet ten inches high, speaks good French, no English, plays the Violin very well. He had on when he went off a light coloured short coat with a red cape to it, waistcoat and breeches: Whoever secures the said Negro man so that his Master may have him again shall have sixteen Dollars reward, and charges from WILLIAM GILL. 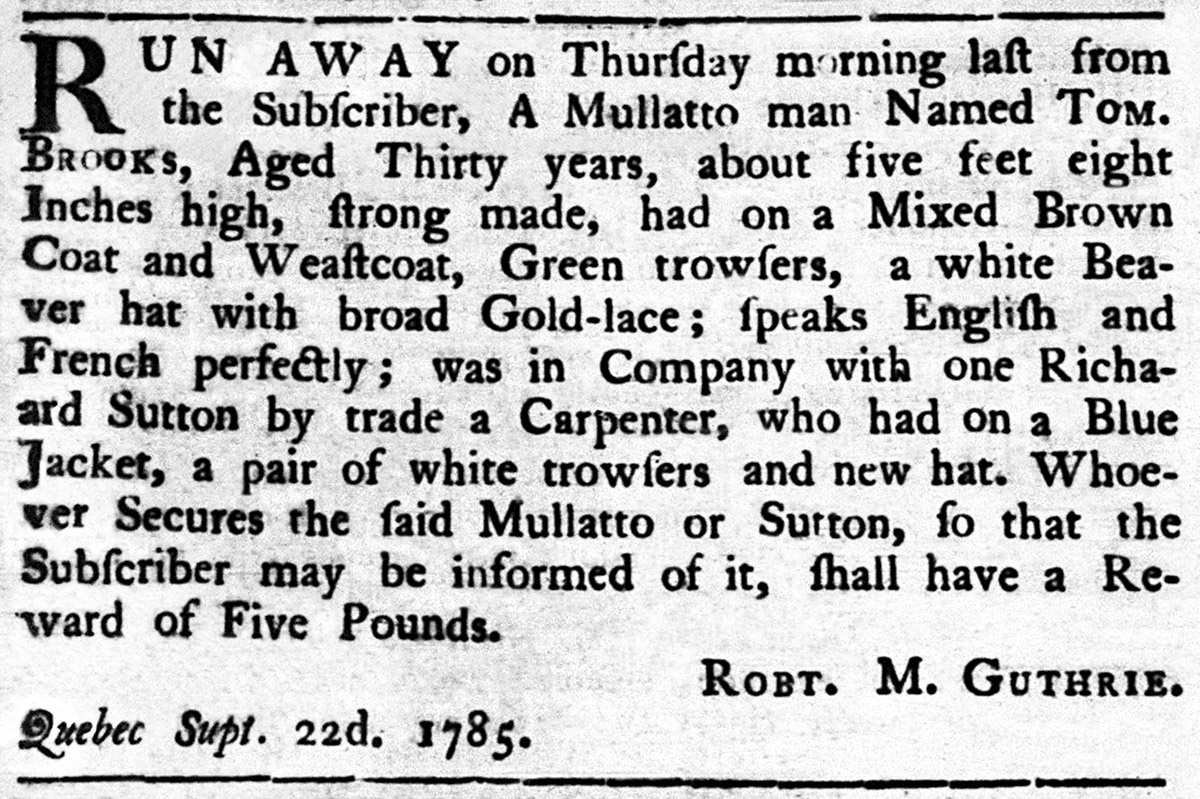 RUN AWAY on Thursday morning last from the Subscriber, A Mulatto man Named TOM. BROOKS, Aged Thirty years, about five feet eight Inches high, strong made, had on a Mixed Brown Coat and Weastcoat, Green trowsers, a white Beaver hat with broad Gold-lace; speaks English and French perfectly; was in Company with one Richard Sutton by trade a Carpenter, who had on a Blue Jacket, a pair of white trowsers and new hat. Whoever Secures the said Mullatto or Sutton, so that the Subscriber may be informed of it, shall have a Reward of Five Pounds. 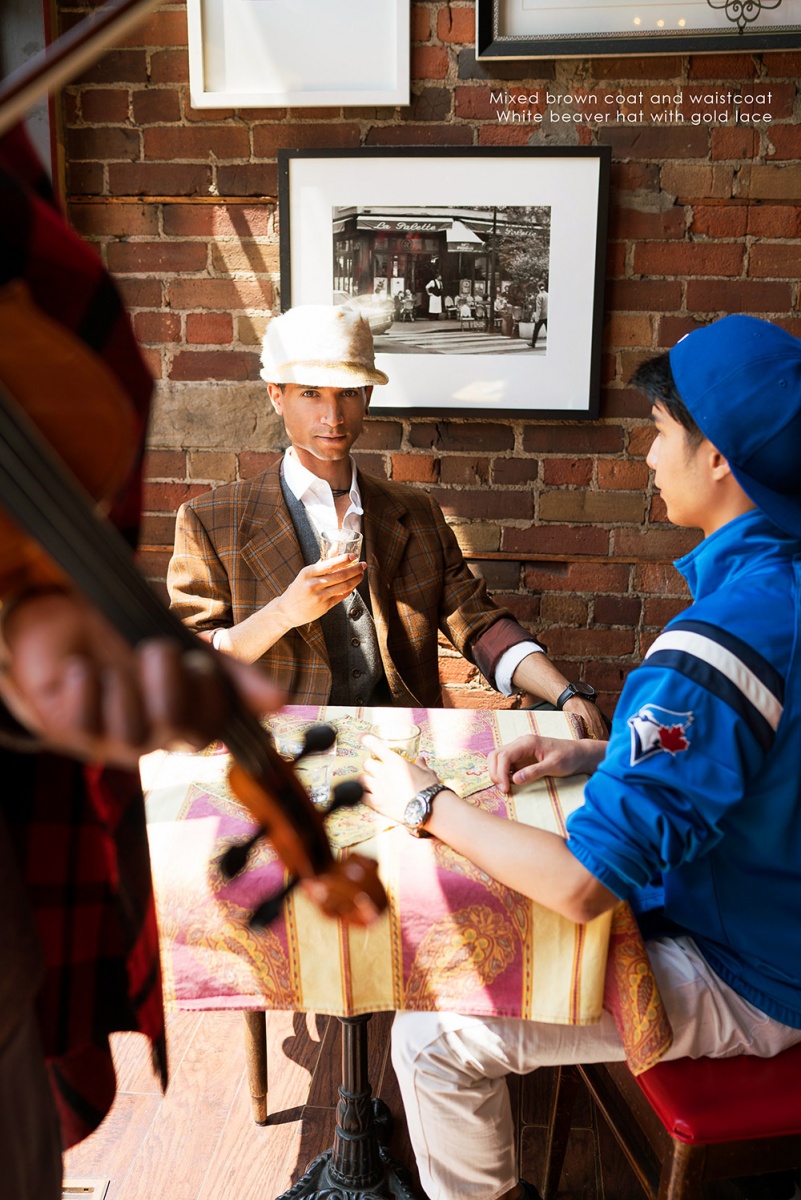 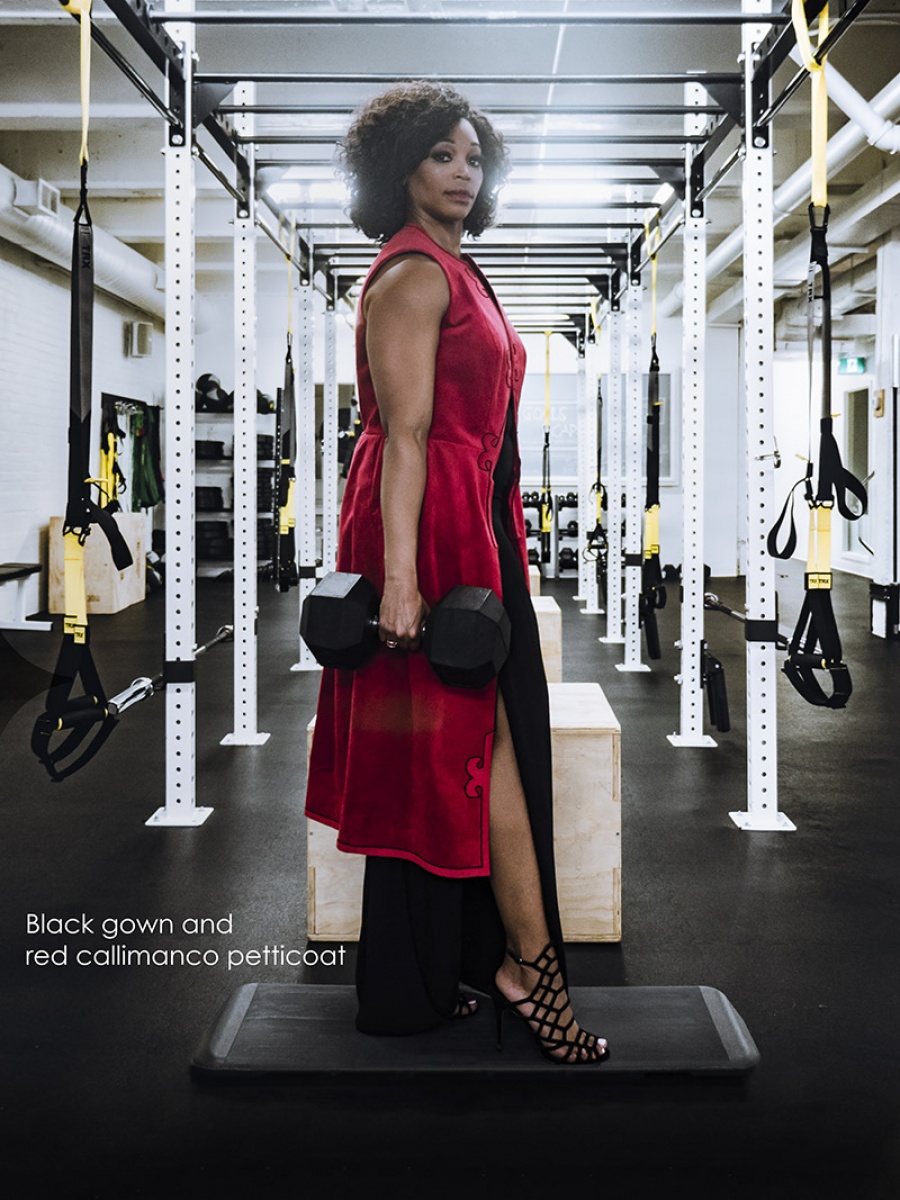 A NEGRO GIRL, of about 24 Years of Age, pitted with the Small pox, speaks good English: Had on a black Gown and red Callimanco Petticoat; and suppos'd to have Cash, both Gold and Silver with her. Whoever apprehends said Negro Girl, and brings her back to said WERDEN, or to Mrs. Mary Wiggans, at Montreal, shall have ONE PISTOLE Reward, and all necessary Charges, paid by I. WERDEN. 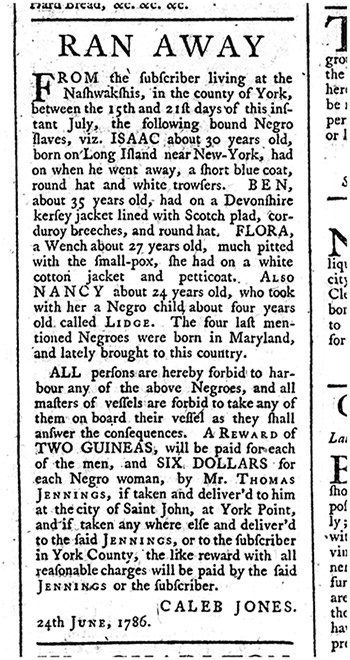 From the subscriber living at the Nashwakshis, in the county of York, between the 15th and 21st days of this instant July, the following bound Negro slaves, viz. ISAAC about 30 years old, born on Long Island near New-York, had on when he went away, a short blue coat, round hat and white trousers. BEN, about 35 years old, had on a Devonshire kersey jacket lined with Scotch plaid, corduroy breeches, and round hat. FLORA, a Wench about 27 years old, much pitted with small-pox, she had on a white cotton jacket and petticoat. ALSO NANCY about 24 years old, who took with her a Negro child, about four years old called LIDGE. The four last mentioned Negroes were born in Maryland, and lately brought to this country.

ALL persons are herby forbid to harbour any of the above Negroes, and all masters of vessels are forbid to take any of them board their vessel as they shall answer the consequences. A REWARD of TWO GUINEAS, will be paid for each of the men and SIX DOLLARS for each Negro woman, by MR. THOMAS JENNINGS, if taken and deliver’d to him at the city of Saint John, at York Point, and if taken any where else and delver’d to the said JENNINGS, or to the subscriber in York County, the like reward with all reasonable charges will be paid by the said JENNINGS or the subscriber. 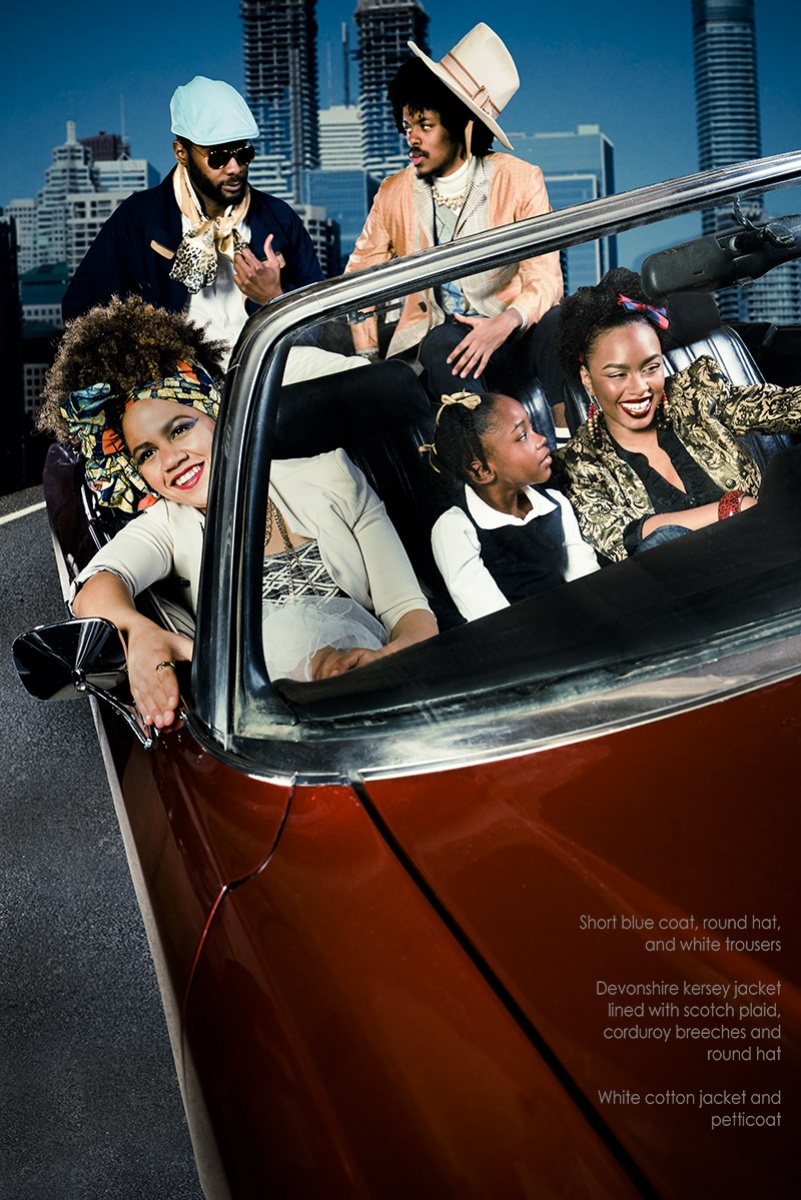 Camal Pirbhai is a textile artist and designer. Born in Canada, he was raised in Switzerland before returning to live in Toronto. Camille Turner is an explorer of race, space, home and belonging. Born in Jamaica and currently based in Toronto, her work combines Afrofuturism and historical research. Her interventions, installations and public engagements have been presented throughout Canada and internationally. For more on Camal and Camille visit: Camal Pirbhai: studiolabeaute.com Camille Turner: camilleturner.com

"As artists, we have a responsibility to be a voice. Governments and institutions have an agenda in their narrative. Historians and sociologist have their role in explaining things too. Through our pieces, we’re exploring a vision of the future rooted in a hidden history. There are also ironies in the current hidden stories of our time paralleled in the fashion industry. Our models adorned in fashion possibility fabricated through a type of slavery. The hidden history of our times perhaps."

Public images of the Wanted series can be found on billboards at the north end of the Eaton Centre, overlooking Yonge-Dundas Square, and on the McCaul street entrance to the AGO.