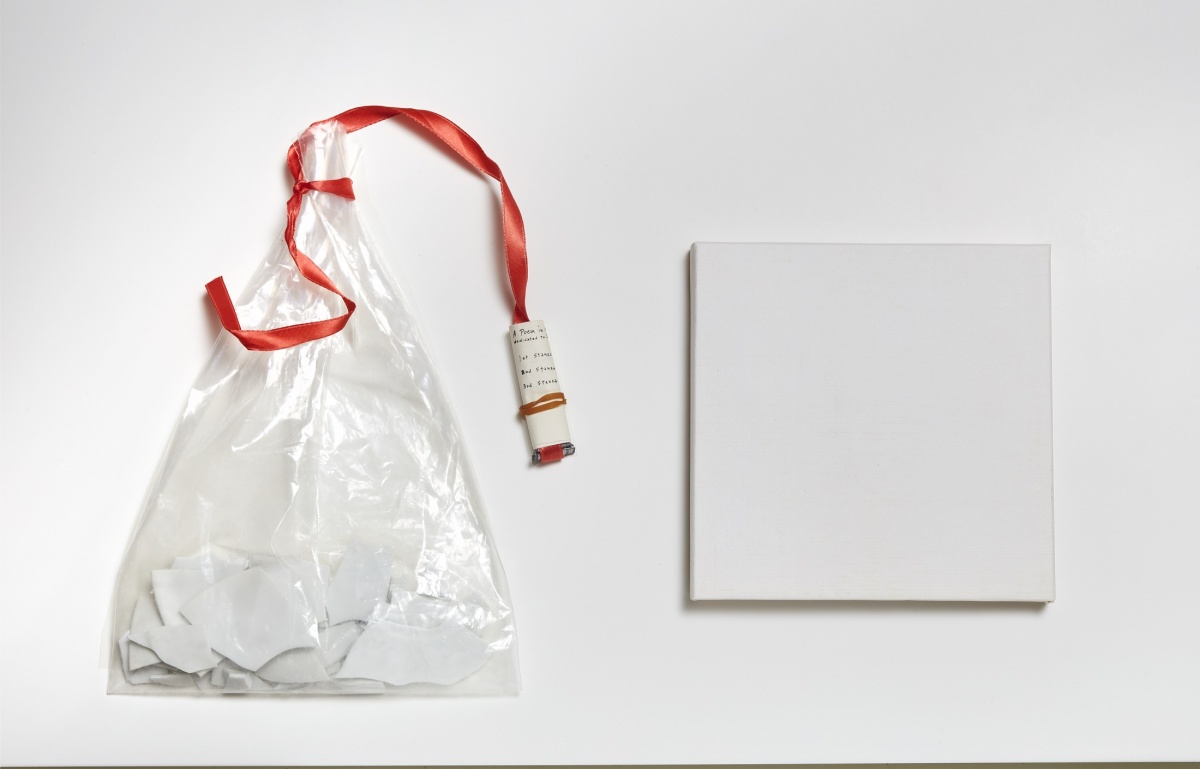 Whether they are filled with meal prep ingredients, athleisure clothing or hair and beauty products, subscription boxes are definitely in trend these days. But they are far from being new. Back in the 1960s, The Shit Must Stop Portfolios used the power of the subscription box to share art made by already famous and emerging artists with subscribers everywhere. For this week’s Art Pick we’re highlighting Mend Piece for John by Yoko Ono – an artwork from the latest rotation of the Mail Art, Break the Rules: S.M.S. Portfolios on Level 1 in the Nicolas Fodor Gallery.

In an era marked by an imbalance of power and a call for revolution, Fluxus art was born. In an effort to bring art to the masses, Fluxus brought together artists and composers who engaged in experimental art performances which favoured the artistic process over the finished product. One of the most important Fluxus artworks came from American-Japanese artist, musician and peace activist Yoko Ono. She brought her work Cut Piece to the stage from 1964 to 1966. During this performance, Ono invited audience members to cut away her clothing with a pair of scissors as she sat motionless on stage. The control was left in the hands of the audience members and the finished product differed for each performance. It became her landmark work and an important piece for Fluxus art.

Mend Piece for John similarly invites audiences to participate in creating the finished product. The work references a time during Ono’s courtship with John Lennon. Ono sent The Beatles star a broken cup and instructions to repair it while he was still married to Cynthia Lennon. The playful and romantic work was included in S.M.S. Portfolio No. 5 in October 1968; Ono and Lennon became a couple shortly after its release. Mend Piece includes a plastic bag filled with porcelain fragments, tied off with a red satin ribbon. Attached to the ribbon is a metal tube of superglue wrapped in a poem on paper and a rubber band. Ono first conceived of Mend Piece in 1966 when she invited viewers to reassemble broken cups with the material she provided and then put their creations on display.

Mend Piece for John exists in two versions. The one presented in the latest rotation of the S.M.S. Portfolios offers pre-broken shards of a cup to be put back together, the other asks viewers to do the same, but instead using their own favourite cup to break and reassemble. Included in this work is a poem by the artist, in which the stanzas take the form of black dots that get progressively smaller. The viewer is instructed to use the poem to repair the porcelain cup, ultimately leaving them to choose how to accomplish this task. As with Cut Piece and most of Ono’s art, viewer participation is central to Mend Piece.

On your next visit to the AGO, take a closer look at Mend Piece for John and other works in the latest rotation of Mail Art, Break the Rules: The Shit Must Stop Portfolio on Level 1, in the Nicolas Fodor Gallery, Gallery 141.