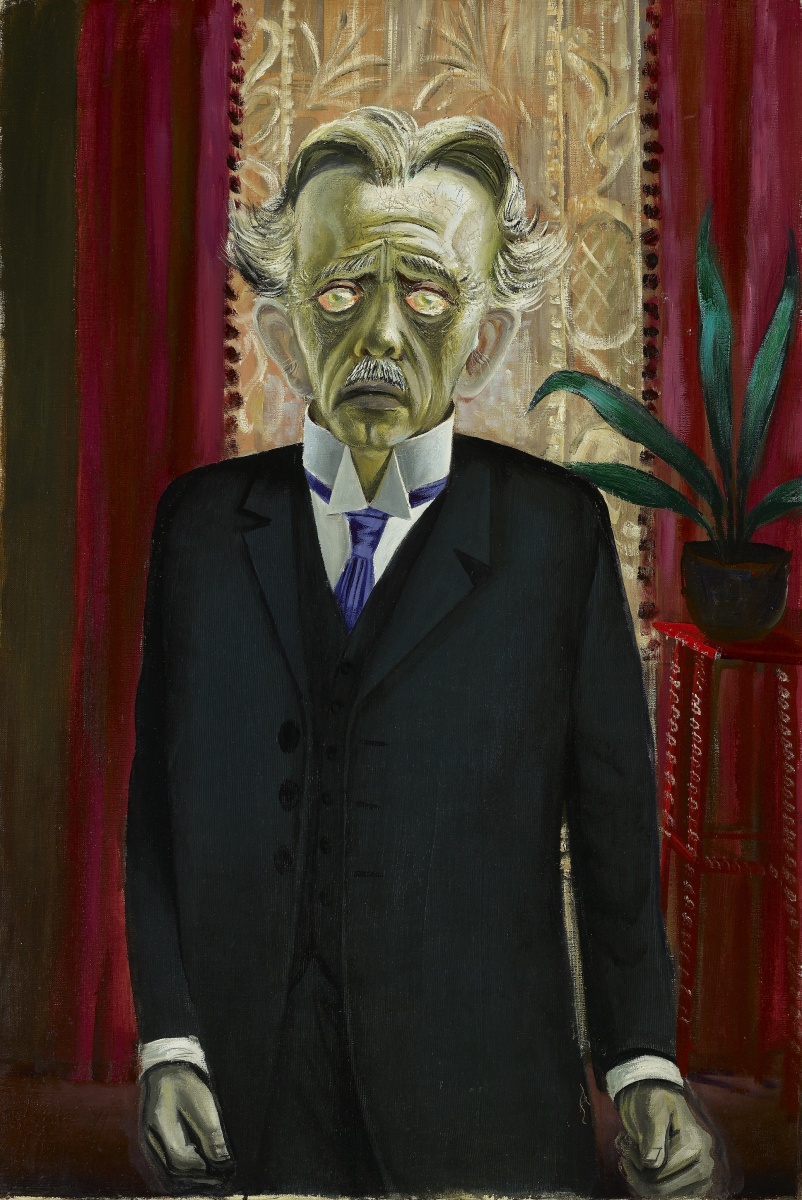 In the first half of the 20th century, Germany experienced two world wars, an economic depression, the rise and fall of the Nazi Party, the Holocaust and the country’s division into two separate states in 1945. Germany was also a hotbed of artistic production during this tumultuous period.  For this week’s Art Pick, we’re looking at German painter Otto Dix’s Portrait of Dr. Heinrich Stadelmann (1922).

On view on Level 1 in the Marvin Gelber Gallery (Gallery 136), Portrait of Dr. Heinrich Stadelmann is a striking but slightly eerie portrayal of a Dresden-based clinical psychologist who specialized in hypnotic therapy.  He was also a known patron of the arts. The doctor’s tailored black suit contrasts jarringly with his unkempt, receding white hair. His face carries a rather grim, deadpan expression that is heightened by his large piercing eyes, which appear bright orange. Painted in 1922, this portrait was made during Düsseldorf Period, when he was a member of the revolutionary artist’s group Das Junge Rheinland (Young Rhineland).

Born in Untermhaus, Germany, as the eldest son of an iron foundry worker and a seamstress, Otto Dix started painting at the age of 14 through an apprenticeship with Karl Senff. After attending the Dresden Academy of Fine Arts, Dix enlisted in the First World War and served from 1915 to 1918. The disturbing experiences of battle deeply affected him, becoming the inspiration for a number of works, among the most notable being The Trench (1932) and The War (triptych) (1932). Dix’s trauma and disillusionment also contributed to a major shift in his work, prompting him to embrace the unvarnished and satirical style of realism seen in Portrait of Dr. Heinrich Stadelmann.

Dix was associated with the Neue Sachlichkeit (New Objectivity) movement of 1920s Germany. Artists of the movement rejected the self-involvement and romanticism of German expressionism and made work that exposed the decay of society in post-World War I Germany. Dix focused heavily on creating work that was critical of German society, often depicting dark scenes of violence, death, poverty and other harrowing events and experiences.

A continued contentious relationship with the German government defined the rest of Dix’s life. When they seized power in the early 1930s, the Nazi party declared Dix a degenerate artist, fired him from his teaching role at the Dresden Academy of Fine Arts, and drastically marginalized his artistic voice. After destroying a number of his notable works, the Third Reich forcibly limited his creative output to simple landscapes and later conscripted him back into the army. Luckily, a German art dealer hid many of his paintings during the remainder of the Nazi regime, later placing them in museums around the world.