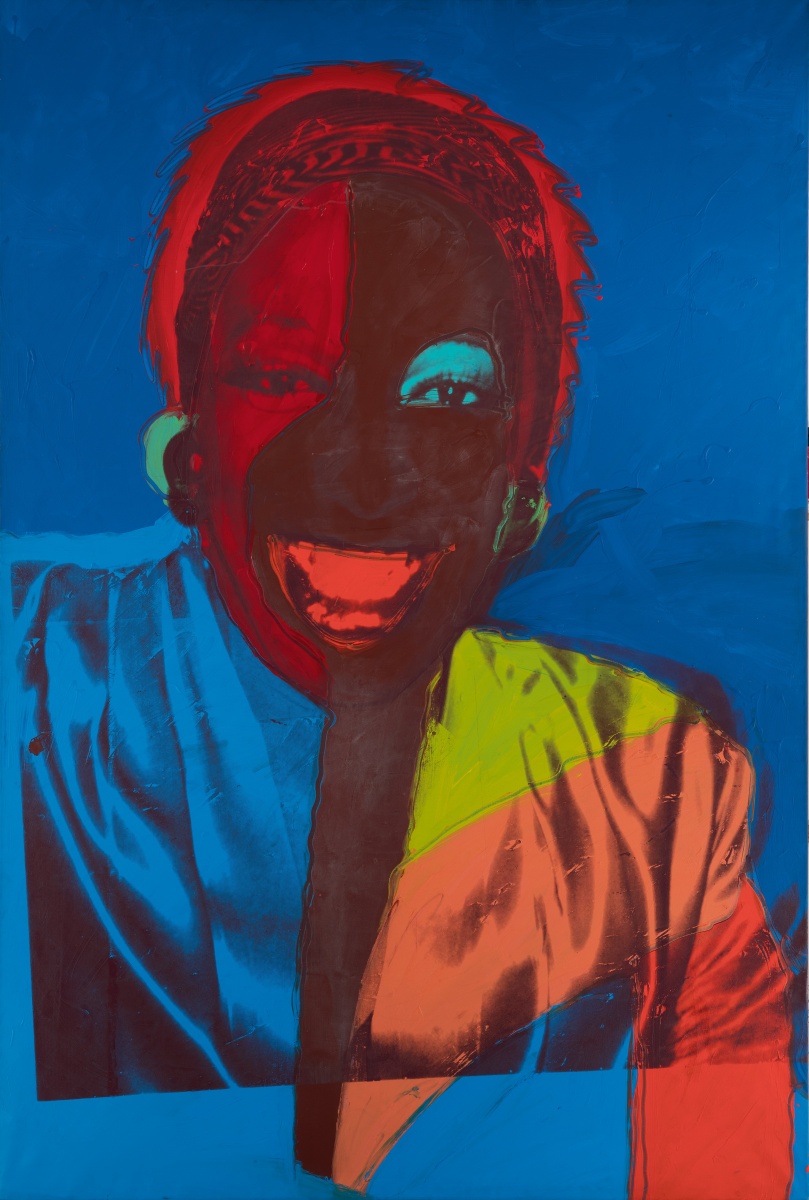 What does it mean to be increasingly visible in a world that both celebrates and targets you based on your identity? In 1974, Italian art dealer Luciano Anselmino commissioned Andy Warhol for a new series of artworks, after the two spent an evening at a seedy New York nightclub named the Gilded Grape. Fascinated by the spectacle of what he perceived to be men crudely attempting to “pass” as women, Anselmino asked Warhol to create portraits of drag queens and trans women of colour. After much negotiation, Warhol agreed and sent three collaborators to scout New York’s queer nightlife and cruising spots for potential sitters.

The sitters, who did not initially know they would be photographed by Warhol, each received $50 per half-hour to pose, while one of Warhol’s recruiters, Corey Tippin, was paid $75. Warhol was paid $900,000 to produce 100 paintings and 10 prints, each in an edition of 100. In the end, he took over 500 photographs of 14 Black and Latinx drag queens and trans women. Titled Ladies and Gentlemen, the series was exhibited in Italy in late 1975 and featured in a catalogue accompanied by an essay and quotations of African-American political figures and writers. Portraits of seven sitters are now on view at the AGO until October 24 as part of the Andy Warhol exhibition: Helen/Harry Morales (Morales signed the Polaroids with two different names), Iris, Lurdes, Broadway, Alphanso Panell, Wilhemina Ross and Marsha P. Johnson.

This series immediately raises questions about the intentions behind it, prompting today's audiences to (re)consider potentially exploitative representations in art and broader visual culture, especially those that depict transgender and racialized people. Yes, Warhol brought members of this marginalized but vital community to international attention, but for what reason? Who benefitted from this exposure? It was Anselmino who coined the “quippy” title Ladies and Gentlemen and, by most accounts, seemed more concerned with dramatizing the binary signifiers of gender (arguably to the point of ridicule) instead of focusing on the humanness of the 14 sitters. It’s debatable whether Warhol sought to express empathy or reverence for the sitters. He documented a community he was not part of and seemed to have rendered them as “Others”. He employed fingerpainting to enliven these textured works and cast the sitters’ faces in brown tones, a notable difference in comparison to his famed portraits of white celebrities whose faces were cast in various unrealistic colours. Warhol was paid well for this commission, yet the sitters were not. They had little to no agency over how their image was used and where it would appear.

Marsha “Pay It No Mind” Johnson is the most famous sitter in the series, her increased visibility and tenacity resonating widely today. She, along with her close friend and fellow activist Sylvia Riviera, is credited with spearheading the LGBTQ+ movement and Stonewall uprising in New York. In 1979, Johnson recounted to the Village Voice of seeing Warhol’s silkscreens of her selling in a gallery for extravagant prices while she struggled to afford rent. Wilhelmina Ross, a drag theatre performer, (image above) features heavily in the series with 73 paintings, 29 drawings, and 5 collage portraits derived from seven Polaroids. Again, both Johnson and Ross were paid a mere $50 per half-hour to pose.

As drag queens and trans women of colour, the sitters were relegated to the margins of society, and in some cases, further excluded within New York’s LGBTQ+ community in the 1970s. They routinely faced discrimination, violence, precarious housing and employment, issues that persist in the trans community to this day. Johnson, now ascended to a saint-like figure, was found dead in the Hudson River. It is believed she was stalked and murdered in 1992. After leaving New York for Puerto Rico in 1974, Ross passed away in 1984 as a result of contracting AIDS. We can only identify nine of the sitters by name because Warhol asked them to sign their Polaroids. Little is known about what became of the remaining sitters after the photographs were taken. Many faded into obscurity and lived secret lives as a means for survival. It was not until some 40 years later when concerted research efforts were made to accurately identify all of them, coinciding with a 2018–19 exhibition at The Andy Warhol Museum.

In conjunction with the major exhibition now open at the AGO, we hosted a virtual panel discussion to dive into the Ladies and Gentlemen series and its many implications. Artist and activist Ravyn Wngz and art historian Kirstin Ringelberg were joined in conversation by AGO Curator Kenneth Brummel and Interpretive Planner Gillian McIntyre. You are invited to share your opinion by scanning a QR code in the Warhol exhibition that leads to an online forum.