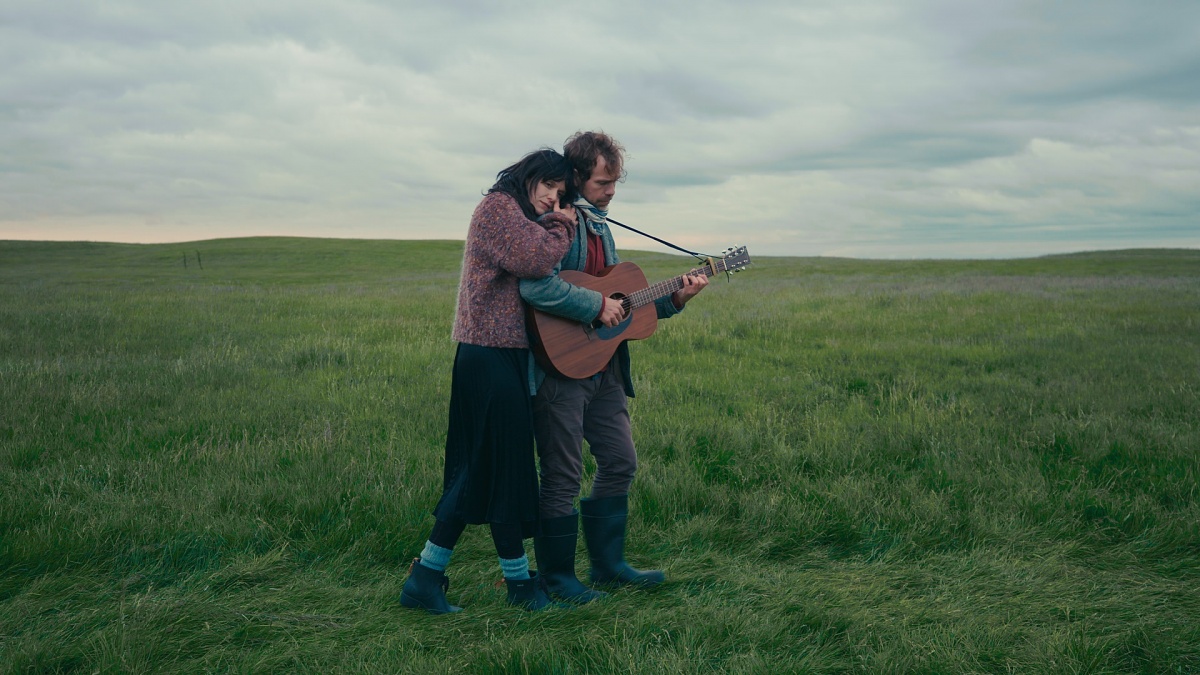 Ragnar Kjartansson (b. 1976, Reykjavík, Iceland), Death Is Elsewhere, 2019,Seven-channel video with sound, 77 minutes. Purchased in honour of Kitty Scott for her contributions to the AGO by Shabin and Nadir Mohamed. Supported by the AGO.

We are all fated with the same end. Whether acknowledged or denied, the inevitable conclusion of our mortality is always with us--it might even be our constant proximity to death that makes life so interesting. Acclaimed Icelandic artist Ragnar Kjartansson’s video installation, Death is Elsewhere, explores our complex relationship with death in a setting that is both beautiful and bleak. On view November 7 on Level 2 in the Signy Eaton Gallery South, this seven-screen circular video installation transports viewers to the Laki lava fields of Iceland during the summer solstice. Here, at the site of one of history’s most catastrophic volcanic eruptions, two sets of twins merrily stroll in a loop, singing about love in the springtime. To Kjartansson, “this dramatic symbolism of love and death [is] fascinating and also a bit ridiculous.”

We recently connected with Kjartansson to learn more about his artistic approach, his fascination with twins, and how Death is Elsewhere speaks to our current global reality.

AGOinsider: What do you think is most important about the juxtaposition of love and death?

Kjartansson: I think the fact that it is a deep, truthful, constantly thrilling cliché. It is the classic juxtaposition. It’s there in Antoine Watteau´s paintings, the frescoes of Pompeii and in our teenage angst. It’s why Venus de Milo is so great, the love goddess resurrected from the grave with no hands. I remember my teenage crash course in romanticism was some Smashing Pumpkins video that started with an Oscar Wilde quote: "The mystery of love is greater than the mystery of death.” I’ve sort of been stuck there since.

AGOinsider: Death is Elsewhere incorporates video, music and movement. As a multidisciplinary artist, how do you conceive your ideas?

Kjartansson: Usually I have a few ideas floating around, often they all come together in one idea. Death is Elsewhere was a pretty classic example of that. I never decide on a message or theme. I avoid that. I never want to comprehend my work myself. Mystery is so damn important. Often, as in Death Is Elsewhere, there is a want to do something with a material I have made with other people. Like that song in Death Is Elsewhere I had written with Gyða, Kristín, Bryce and Aaron. I was thinking about ways to somehow get that sculptural tension of being around these brilliant people who are also identical twins. Then this idea of a circular movement came to me. I was thinking very much about Carolee Schneeman and her way of using video in a circular shape. Actually, I managed to tell her that before she died.

AGOinsider: You’ve said before that you “find the sculptural, symmetrical tension of twins very beautiful”. Can you elaborate on this description?

Kjartansson: I find it just fascinating. I mean this idea of repetition in an individual is just mind-blowing. It is a bit embarrassing to talk about it… I think I have objectified these dear friends of mine enough with this piece, ha ha. I find it interesting after knowing these close friends of mine for years and knowing how unlike they are, but sometimes it just plays a trick on the mind of who’s who when you enter a room. Being friends of twins adds a dreamlike state to reality.

AGOinsider: Do you feel like our recent experience with a global pandemic adds new depth and/or complexity to the concept behind Death is Elsewhere?

Kjartansson:  Absolutely there is looming death in it and this notion that nature makes us just drops in the ocean. The pandemic sure is nature. There was some unease about the future very much engraved into this piece, both personal and generational. A romantic circle surrounded by a natural disaster that changed the world. Eldhraun, the lava field providing the backdrop for Death is Elsewhere, comes from an eruption in Laki in 1783. It was immense and killed a third of the Icelandic population and millions died of famine around the world. Some theories say it played a big role in creating the ground for the social unrest that led to the French Revolution. I was thinking very much about Eldhraun, the natural disaster of the lava in the background. I was and am quite interested in Eldhraun as political nature.