Antoinette Bouzonnet-Stella, Plate 2, from The Entry of the Emperor Sigismund into Mantua, after friezes in the Palazzo del Te, Mantua, Engraving on paper, Sheet: 22 × 50.5 cm. Purchase, with funds from James Lahey and Pym Buitenhuis, Christopher Birt and Yeti Agnew, and The Marjorie and Gerald Bronfman Works on Paper Endowment Fund, 2019 © Art Gallery of Ontario 2019/2321.2

In 2019, the AGO was fortunate enough to acquire a set of 25 numbered prints by the French engraver Antoinette Bouzonnet-Stella. First published in 1675, they are extraordinary examples of an artist working in series, and of a 17th-century female artist at work.

They also represent something of a mystery. In her lively and highly detailed engravings, Antoinette brings to life a sculptural frieze she never saw in person. The work is no mere copy, rather a sensitive serialization of a sculptural work, translated into 25 engraved plates, with the action broken up to capture and emphasize classical motifs.

Created almost a century before her birth, the original frieze is roughly 60 metres in length and features more than 500 characters. Depicting a long procession of Roman soldiers, the original Entrance of the Emperor Sigismund into Mantua was designed by Renaissance artists Giulio Romano and Francesco Primaticcio (probably between 1526 and 1531), for Romano’s mannerist masterpiece, the luxurious Palazzo Te. The frieze remains on view to this day, yet no record exists of Antoinette ever having traveled to Italy. 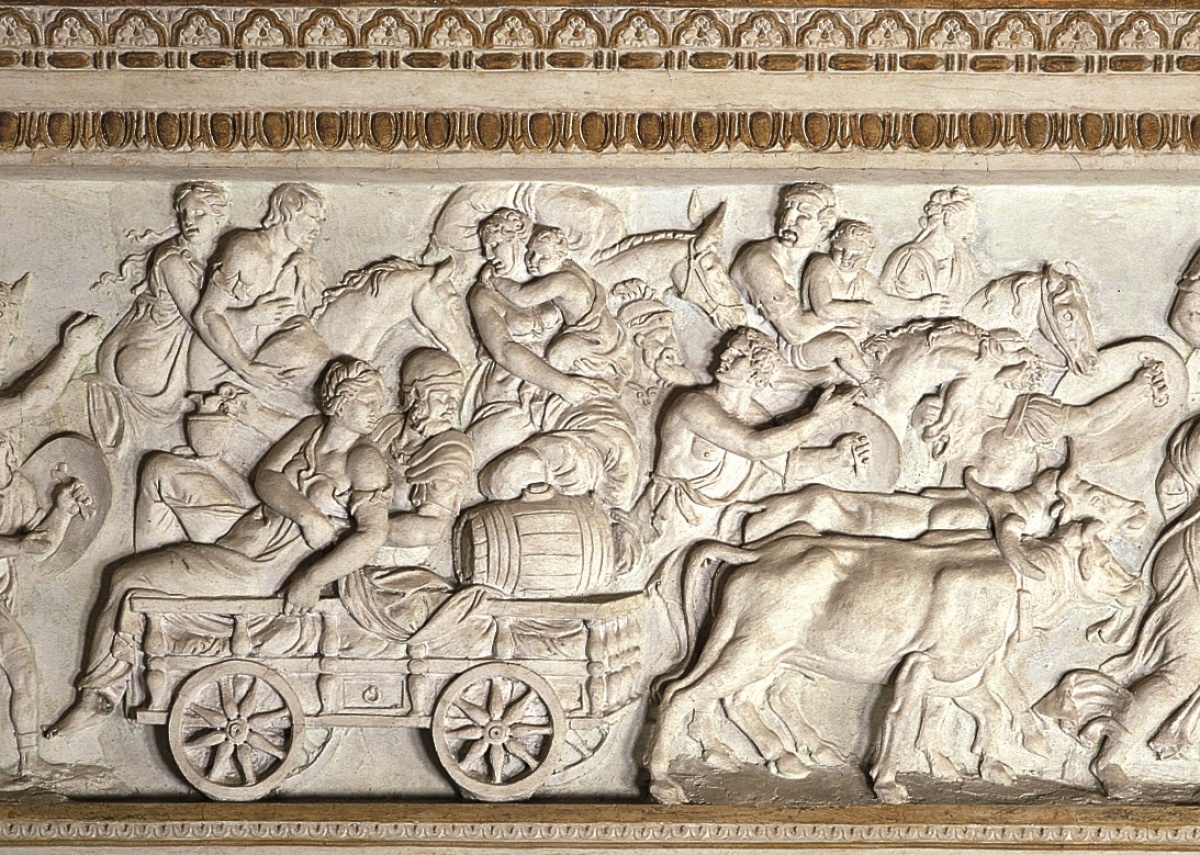 One possibility is that her uncle, the esteemed court painter Jacques Stella, with whom she and her siblings lived in Paris, himself had made drawings of the freize. Between 1616 and 1621,he had worked in the court of Cosimo II de Medici in Florence, Italy. An advocate of Roman Classicism even after his return to Paris and ascension to the post of court painter to King Louis XIII, it is possible he may have seen the original on his journeys. Antoinette and her siblings would take over his workshop after his death.

Another exciting possibility, put forth by gallerist Sonja Hansard-Weiner, is that Antoinette may have seen the engravings of the frieze made by the 16th-century artist Diana Scultori. The first female engraver of the Italian Renaissance to sign her work with her full name, Scultori is today known as Diana Mantuana, a name she took on to emphasize her connection to the important artistic lineage of the court city. In 1575, she made three engravings based on the Sigismund frieze. We do not have any record of Antoinette seeing these engravings, but how exciting to think these two exceptional women, despite borders and centuries, might have had an artistic connection.

However Antoniette came to know the Mantuan friezes, her engravings are captivating. In 25 scenes, she captures in precise detail, the spectacle and pomp that only a conquering Holy Roman emperor could produce. In plate after plate, horses pull wagons, children follow women, men lean on their spears, while musicians, river gods and soldiers march ever on. It is not until plate 17 that we in fact meet Sigismund himself, clad in armour. Located at the centre of the plate on horseback and crowned by laurels, the victorious figure of Sigismund, en route to Rome to be crowned Holy Roman Emperor by Pope Eugene IV, gestures forward perpetually into history.

Famous in her lifetime, but forgotten for centuries following her death, Antoinette Bouzonnette-Stella was rediscovered more than 40 years ago, when British-American art historian Ann Sutherland Harris included her in the groundbreaking catalogue for the 1976 exhibition Women Artists: 1550-1950, and today, thanks the generosity of AGO donors, evidence of her success lives in the AGO.

Entrance of Emperor Sigismund in Mantua by Antoinette Bouzonnette-Stella is part of the AGO exhibition, Migrations of Line, in the John & Nancy Mulvihill Gallery, located on Level 1 (gallery 127).

You'll be able to see this exhibition again when the Gallery reopens in the coming weeks.