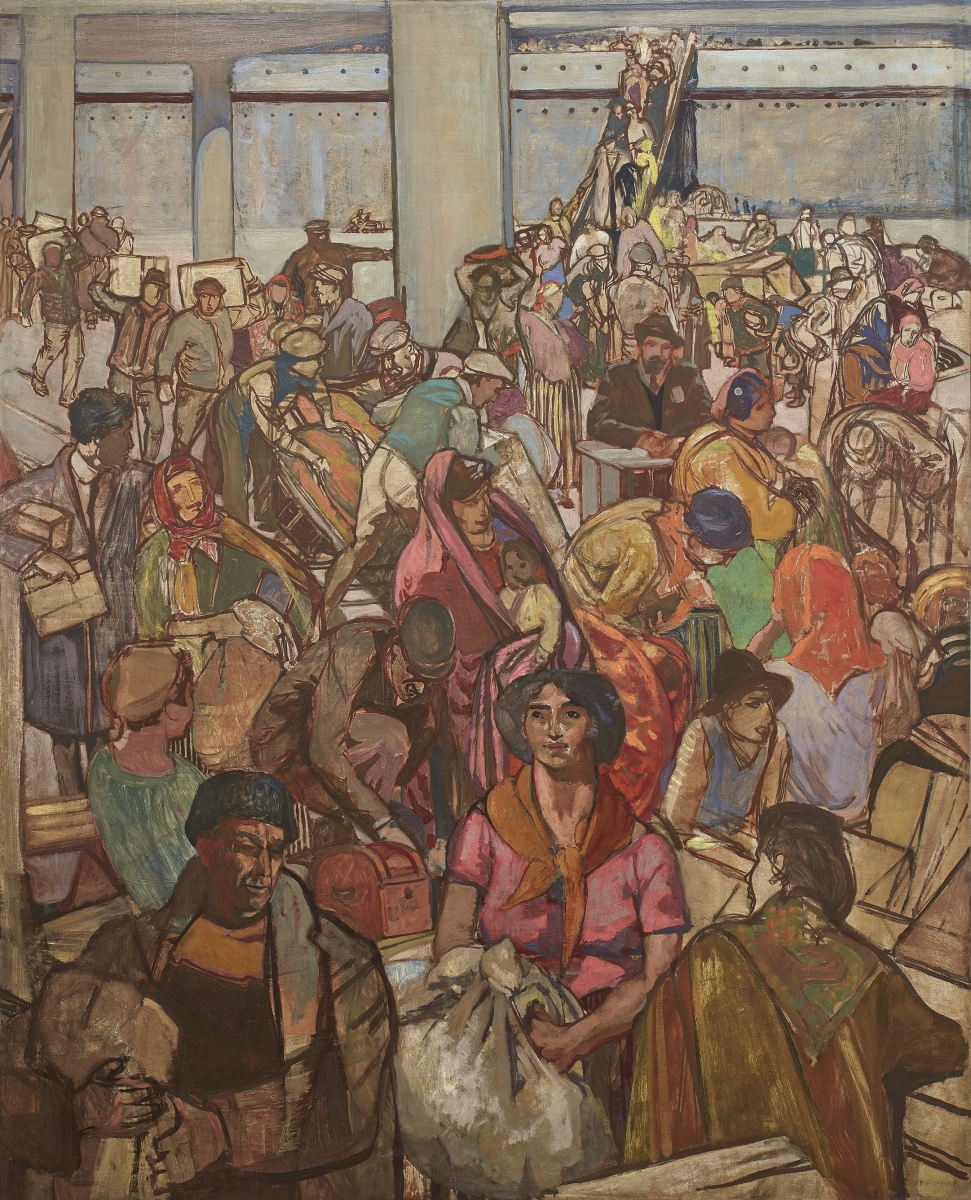 As you step into the Thomson Collection of Canadian Art galleries, you’ll find many familiar Canadian artworks lining the walls. Many of these iconic landscapes decorate coffee mugs, adorn handbags and seal letters to loved ones. But there are a few works in these galleries that may come as an unexpected surprise. Amidst the beautiful landscapes, you'll find a strikingly different work by Frederick Horsman Varley titled Immigrants.

As one of the co-founders of the Group of Seven - best known for their landscape work - it may come as a shock that Varley’s preferred subject matter was the human face. In the crowded sea of faces that make up Varley's Immigrants, one stands out. As several immigrants disembark what looks to have been a long and treacherous voyage, the viewer is confronted by the face of a woman. She stands within the crowd, yet is visibly centred in the composition and highlighted by a colourful pink outfit. Decorated by a red scarf, she makes sharp eye contact with the viewer and holds what looks to be a sack full of her possessions. She looks forward longingly and becomes a symbol of the immigrant of the day, embodying the mixed feelings of hope and uncertainty.

Varley's work, while much different than those by other Group of Seven members, pulled from his experiences as an immigrant, likely playing to his own accounts of the journey he took in 1912. But his account might have been much different had he immigrated today. In those days, the ideal immigrant came to Canada as an independent farmer or labourer of British or American stock. Immigrants who came from anywhere except the British Isles were considered foreigners. The multiculturalism talked about in today’s Canada didn’t exist at that time. It wasn’t until the 1960s when changes to immigration policy began to change the fabric of Canada.

In 1962, 50 years after Varley immigrated to Canada, the country eliminated overt racial discrimination from its immigration policy. At this time, skill became the main criteria for determining admissibility rather than race or national origin. With these new rules, Canadian immigrants could also sponsor relatives for immigration but only immigrants of preferred nations in Europe, the Americas and select countries in the Middle East were admissible.

By 1967, 100 years after Confederation, changes to Canada’s immigration rules introduced a revolutionary points system for people immigrating to Canada. No longer did Canada’s immigration policy give preference to immigrants from majority-white countries but rather made way for a new type of immigrant based on education, occupational skills, job prospects, age and language proficiency. With enough points, immigrants were granted entry regardless of race, ethnicity or national origin.

In 1971, Prime Minister Pierre Trudeau announced multiculturalism as an official government policy. The policy intended to preserve the cultural freedom of individuals and provide recognition for cultural contributions from diverse ethnic groups to Canadian society. The Canadian Multiculturalism Act of 1988 sought to protect the cultural heritage of all Canadians, reduce discrimination and encourage the implementation of multicultural programs and initiatives within institutions and organizations. Canada became the first country to pass a national multiculturalism law.

As a white, British man, Varley’s life was a privileged one; he was not subject to the same hardships as non-white immigrants from countries other than England and America. However, he would have been familiar with the feeling of dislocation associated with immigration. From economic hardships to the need to adapt to a new surrounding all while maintaining a cultural identity, these themes are present in Immigrants. You can see this work and other pieces by Frederick Horsman Varley in our Thomson Collection of Canadian Art.

Keep up to date with all your AGO news and updates with the AGOinsider. Sign up today and have stories like these delivered straight to your inbox every week.