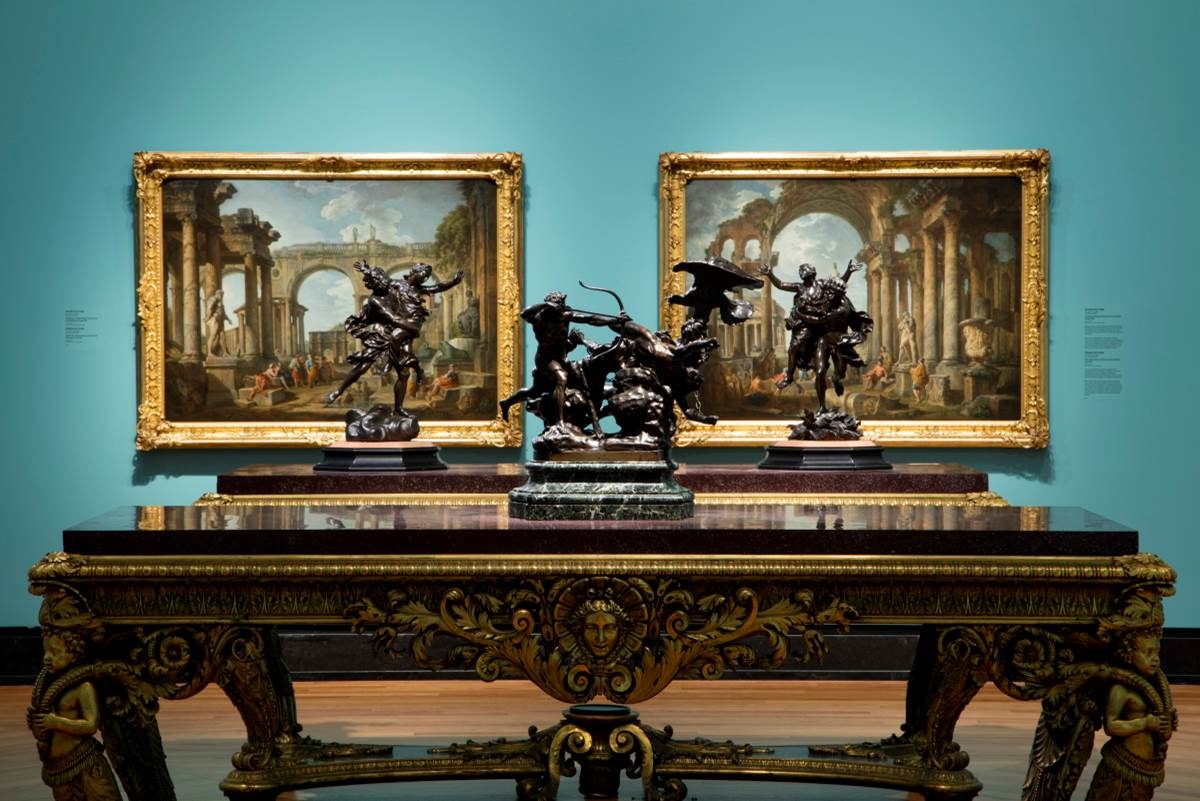 Jean-François Denière Tables in the style of Louis XIV for the Duke of Hamilton 1823 Ormolu and brass and Porphyry tops, probably Roman, around 0-500 C.E. Gift of Miss L. Aileen Larkin, 1945.

As 2017 winds down, we’re starting to look back on our biggest projects of the year. One of them was Look:Forward, our major reinstallation project which began late 2016 and will continue into 2018. This year, we focused on the first floor, including our European Galleries, which present art created between the years 1200 and 1900. We asked our curators of European Art, Sasha Suda and Caroline Shields to recommend some highlights to check out as you wander through the galleries. Make sure you look at the on-point wall colours and beautiful ceilings –each gallery features a different design.

The Reuben Wells Leonard Rotunda (Gallery 115) is home to one of Canada’s most important paintings: Peter Paul Rubens’s The Massacre of the Innocents. Rubens painted during a time of incredible political and social unrest –violence was part of his daily life.  His choice of subject matter, the killing of all boys under two who could challenge the power of the King who ordered their death, resonates even today when political unrest threatens innocent lives. Opposite, in the same space, is  The Raising of the Cross, also by Rubens, which he painted two years before dying.

From there you can walk to Reuben Wells Leonard Memorial Gallery (117) whose rich purple walls holds our Medieval and Renaissance works. The stunning sculpture of Michael the Archangel is one of the most important medieval sculptures in any museum today. Trust us, it’s rare to have a sculpture from the 1200s with traces of its original paint job (have a peek under his right arm!). Stay tuned for a digital reconstruction of how he looked originally, when he was made for display in a market square where he protected his city.

Gian Lorenzo Bernini is the star of the next space  Laidlaw Gallery (119), regular visitors will notice sculptures created by Gian Lorenzo Bernini. We are very lucky to have two works by this amazing artist. The first, The Crucified Christ (Corpus), is currently not on view as we loaned it to the Borghese Gallery in Rome for a very special show devoted to the artist; our Bernini is hanging alongside a similar Bernini crucifixion work from Madrid. Don’t worry, it’s coming back and will be installed in early 2018. The other Bernini, a visitor favourite, is the bust of Pope Gregory XV. Its worth noting that we are the only museum in North America with two Berninis in its collection.

E.R. Wood gallery (121) is home to one of the AGO’s most recognizable works Portrait of a Lady with a Lap Dog, by Dutch master Harmensz van Rijn Rembrandt. Rembrandt painted this not long before he died, and at a time when he was struggling deeply with his personal life and in business.  The expressiveness of the brushstrokes conveys that struggle lyrically.

Make sure to pop into the Joey & Toby Tanenbaum Sculpture (146) Atrium to admire the three Rodin sculptures on view, Adam and the two Burghers of Calais. Fun fact—Rodin’s Adam is visible from the front entrance of the AGO!

The magnificent tables at the center of Frank P. Wood Gallery (123) are just as fascinating as the paintings and sculpture that surround them. The tables’ red stone tops were quarried in Egypt before 500 A.D. and used as temple wall decorations in Ancient Rome. Centuries later, the 10th Duke of Hamilton bought the stone during a trip to Rome, and in 1823 he commissioned a Paris design firm to craft the table bases. The bases were exhibited at the Louvre before moving to the Duke’s palace in Scotland. Now they sit in front of two works by Giovanni Paolo Panini (also from Rome) which are on view at the AGO for the first time in over a decade.

We end our highlights tour in the Fudger Memorial Gallery (125) with a work by Claude Monet, Vétheuil en été. Monet crossed the river from his hometown to paint this work as the sun set behind him. The dusty pink colour in the sky evokes a hot and humid summer afternoon. This painting is all about the effects of light as it glimmers off of the river and the hilltop village. If you’re so inclined you can also take a peek on Google Street View to see how Monet’s view looks today!