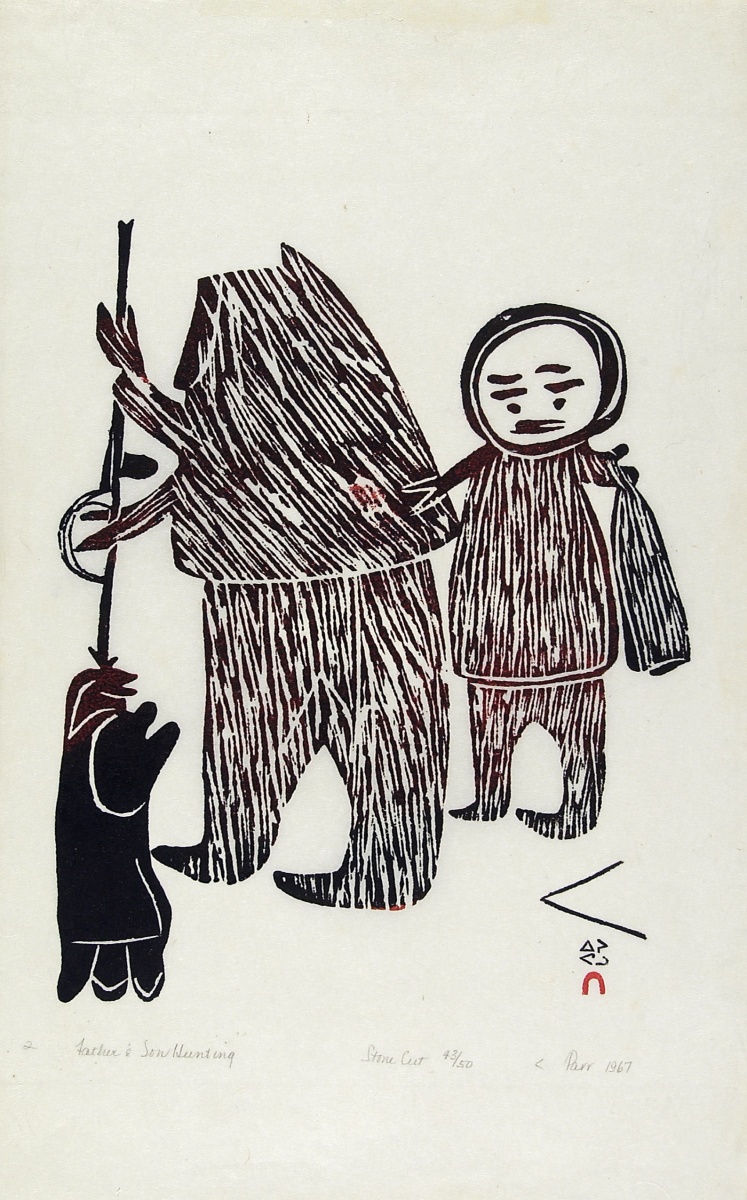 At the centre of Inuit culture is family and for Inuit artist Parr, the same can be found at the heart of his work. Unlike other Inuit artists, Parr rarely drew inspiration from cosmological and sacred stories. Instead, he favoured portrayals of his early life.

Parr was born in 1893 on southern Qikiqtaaluk (Baffin Island), Nunavut. He grew up in the traditional Inuit way of life, spending his days hunting and later raising a family on the Island. Like many Inuit, Parr was a hunter for most of his life – a good one at that – until an accident brought an end to his hunting days. Unable to hunt any longer, Parr and his wife Eleshushee relied almost completely on their eldest sons.

At 68 years old, on the advice of Terry Ryan, Parr and Eleshushee began drawing in order to make a living. The pair began to draw with great passion after their move to Kinngait (Cape Dorset), a place where many Inuit printmakers thrived. Regarded as the Capital of Inuit Art, Kinngait has produced a number of drawing, printmaking and carving artists, including Pitseolak Ashoona, Annie Pootoogook, Shuvinai Ashoona, Kenojuak Ashevak and Timotee Pitsiulak.

Parr’s works primarily depict traditional hunting and the nomadic lifestyle of the Inuit. Filled with animals and hunters drawn in a deliberate style that disregards naturalism or perspective, Parr’s work expresses his love for a rapidly changing way of life due to colonial incursion. Father and Son Hunting is a minimalistic yet vivid depiction of a father and son participating in a seal hunt –  something very special both culturally and traditionally for Inuit families. The Inuit hunt seal in the Canadian Arctic to this day. These displays of Inuit culture were a staple in Parr’s nearly decade-long artistic career and a tribute to his way of life and the family he cared for.

Parr's work influenced many other artists in Kinngait, including two of his sons, Nuna and Peter, who went on to become artists themselves. Today, Parr's drawings serve as a beautiful record of Inuit life for future generations.