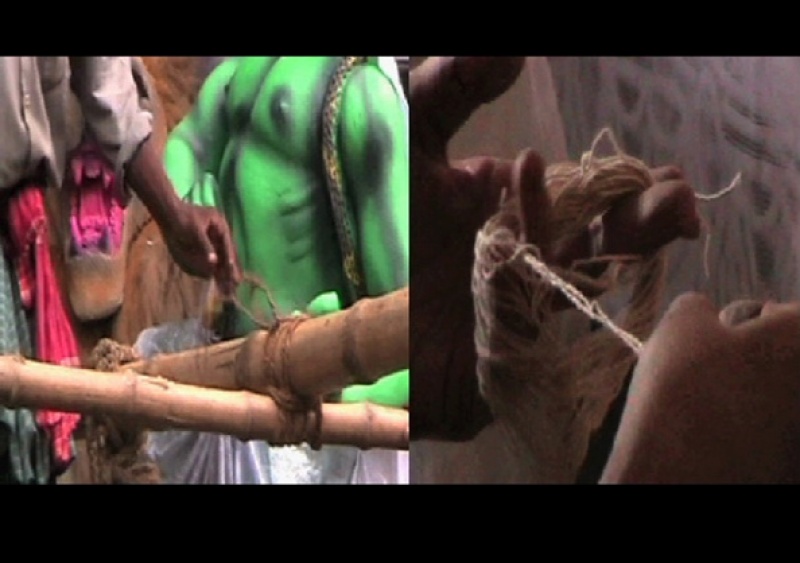 As part of Maharaja Festival Week, Debashis Sinha will present two of his recent works - shruti, followed by harmonium in Walker Court.

shruti is a performance that uses field recordings and video footage collected in the streets of Kolkata, India as material for an open live cinema performance. Each iteration of the project is unique - footage and audio are triggered and manipulated live in the moment, in response to the material itself and the environment. shruti is an improvised performative exploration of the city that moves fluidly between the streets of Kolkata, and the greater space within ourselves. A meditation on sound and identity, Sinha's performance uses the everyday sound of Kolkata to craft a travelogue of universal proportions.

harmonium is a 4 movement video/audio work exploring the nature of sound as vibration. Consisting of a wide range of video and audio material from the analog and digital realms, harmonium presents a cohesive language of sound and image impossible to articulate verbally, but derived deeply from the natural world.  As with all Sinha’s work, it is a meditation, demanding a calm and mindful focus to fully participate. harmonium also has a life as a live cinema performance. Utilizing the vocabulary of club based DJ/VJ performance, the audio and video of the work is deconstructed and improvised with, creating an experience lying parallel to but outside of club culture.  The live cinema experience of harmonium, which also incorporates material played live on the instrument of the same name, draws on the same vocabulary and material as the screening version, but is a dynamic response to the moment and the space.  Each experience of the live cinema project is unique to the performance, with no 2 performances the same.

Debashis Sinha's creative output spans a broad range of genres and media. Sinha has developed his compositional style by weaving together his experiences as a second generation South Asian Canadian, training and knowledge in percussion from various world music traditions, electronic and electroacoustic music and technology, and a desire to transcend the traditional expectations of how these streams might intersect and interact. This approach has led Sinha to realize projects spanning the genres of radiophonic art, single and multichannel video, audiovisual performance, installation art and music, from Banff to Berlin. He has been the recipient of grants from the Canada Council for the Arts, The Ontario Arts Council, the Toronto Arts Council, and the Chalmers Foundation.