Indigenous Women in Hip-Hop: A night of performance and storytelling 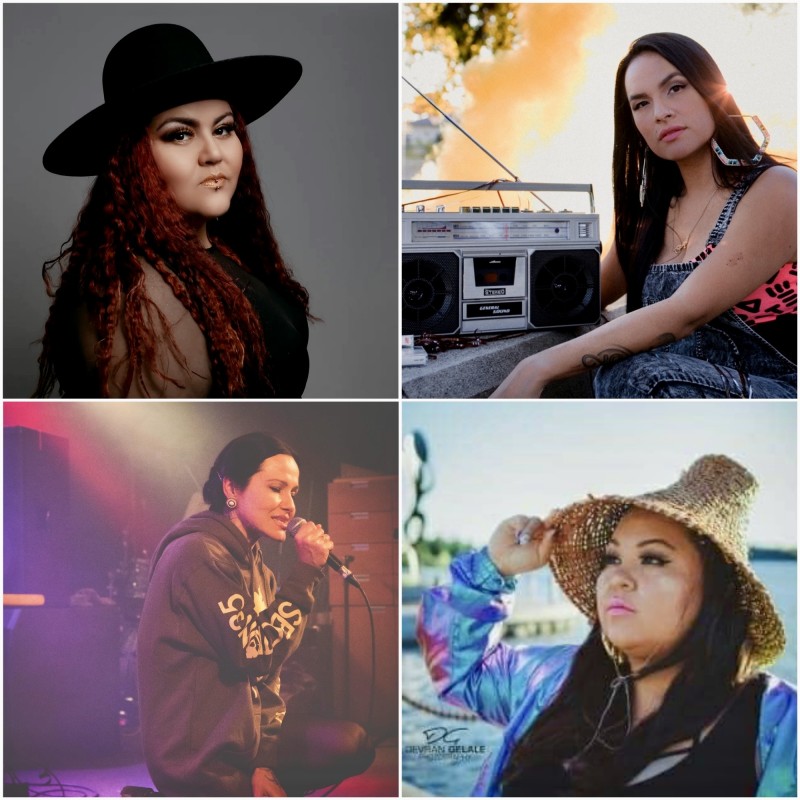 Images courtesy of the Artists.

Indigenous Women in Hip-Hop: A night of performance and storytelling

Presented in partnership with the Urban Indigenous Education Centre

Join us in Walker Court for an exhilarating evening of stories, rhymes and beats from Indigenous hip-hop artists Eekwol, DJ Kookum, JB The First Lady and T-Rhyme. Sharing messages of power, determination and language resurgence, all four artists speak from their positions embedded in, and inspired by, Indigenous histories.

Eekwol (Lindsay Knight) is an award-winning hip-hop performing artist living in Saskatoon, Treaty Six Territory, originally from Muskoday First Nation. Eekwol has been making music for many years.  Her fifth full-length album, titled Good Kill, was released in 2017 and the single “Pitiful feat. 2oolman” made it to the #1 spot on the National Aboriginal Music Countdown and numerous streaming playlists. For 2019, she successfully received a Canada Council grant and completed a concept project with fellow lyricist T-Rhyme, titled For Women By Women. She is currently working on a new album funded by the Canada Council for the Arts to be released in winter 2023.

Cheyanna Kootenhayoo, AKA DJ Kookum, is a DJ and multimedia maker from the Alexis Nakota Sioux Nation and Cold Lake First Nations, their maternal Denesuline traditional territory. Based out of Vancouver, British Columbia, Kookum has been making a name for their self across the country and is no stranger in the community. Kookum is an open format DJ inspired by EDM and hip-hop music. This diverse-mix-diva is a force on the decks and always keeps the party hype fresh and unpredictable.

Jerilynn Snuxyaltwa Webster, known by her stage name JB the First Lady (born 1984), is an Indigenous hip-hop and spoken word artist, emcee, beat-boxer, activist, cultural dancer and youth educator from the Nuxalk and Onondaga nations. She is currently based in Vancouver, British Columbia. JB sees her music as a way of capturing oral history and often writes lyrics about challenging subjects such as the Canadian Indian residential school system and missing and murdered Indigenous women. She sees hip-hop as a tool of Indigenous empowerment and is a prominent voice for decolonization and for inspiring Indigenous women and youth.

Inspired by the spirit and sound of golden era hip-hop, Tara "T-Rhyme" Campbell shines a spotlight on her life experiences through poetry and music. Pride in her Denesuline (dene) and northern Cree roots has served as motivation for her to become an artist both women and Indigenous youth can relate to. Aside from being a mother, wife and lyricist, she is also the artistic force behind her beaded jewellery line, aptly named Beads, Rhymes & Life. In 2016, T-Rhyme released her first original project titled Diary of a Mad Red Woman. The five-track EP is a fierce introduction to her style and signature sound, while she shares stories of her trials and perseverance throughout her journey to success. 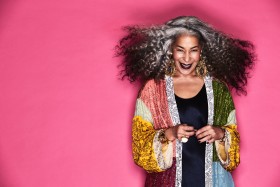 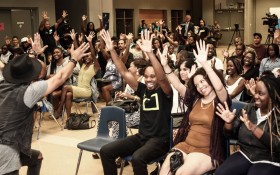