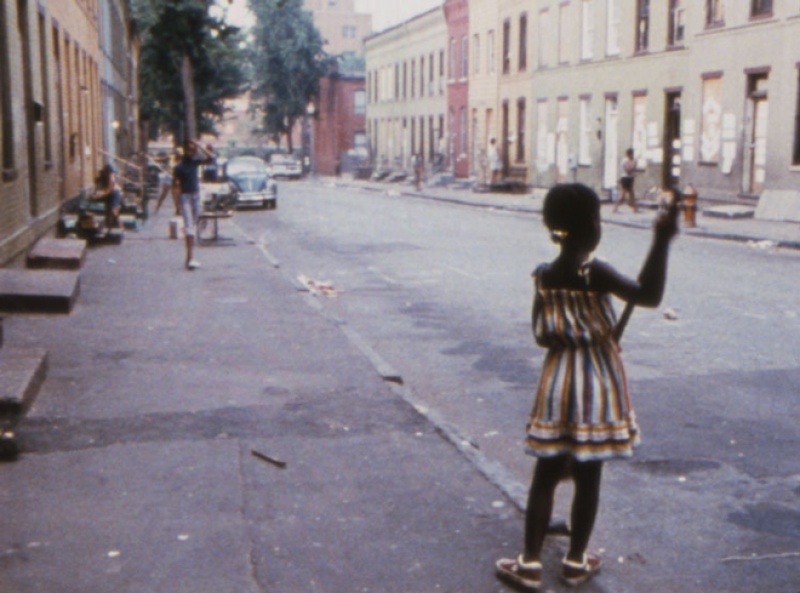 This program reflects on the worldly challenges Black people have faced in their built and imagistic environments. The films activate radical Black histories and possibilities latent within buildings, bodies, and the nascent consciousness of imperiled Black youth. With an introduction by Jacqueline Najuma Stewart.

Riffing off Amiri Baraka’s poem “Part of the Doctrine,” this collage film presents rapid-fire montages of Africans and Black Diasporic figures, the historical inheritance of an unborn Black child.

A prescient portrait of late-1970s Washington, D.C., that chronicles the city's creeping gentrification, the systematic expulsion of poor Black residents, and the community response in the form of the Seaton Street Project, in which tenants banded together to purchase buildings.

The dilapidated former house/headquarters of South Central LA's Black Panthers is at the center of a clash between radical ideals of the past, and 1980s Buppie efforts to use white-owned platforms (banks, media) to uplift the community.

Jacqueline Najuma Stewart is Professor in the Department of Cinema and Media Studies at the University of Chicago and Director of the Richard and Mary L. Gray Center for Arts and Inquiry. Her publications include the award-winning books Migrating to the Movies: Cinema and Black Urban Modernity (University of California Press, 2005) and LA Rebellion: Creating a New Black Cinema (co-editor, University of California Press, 2015). She is co-curator of Kino Lorber's box set Pioneers of African American Cinema. Her film work in Chicago includes directing the South Side Home Movie Project and serving as Curator of Black Cinema House, a neighborhood-based film exhibition venue run by Theaster Gates’ Rebuild Foundation.