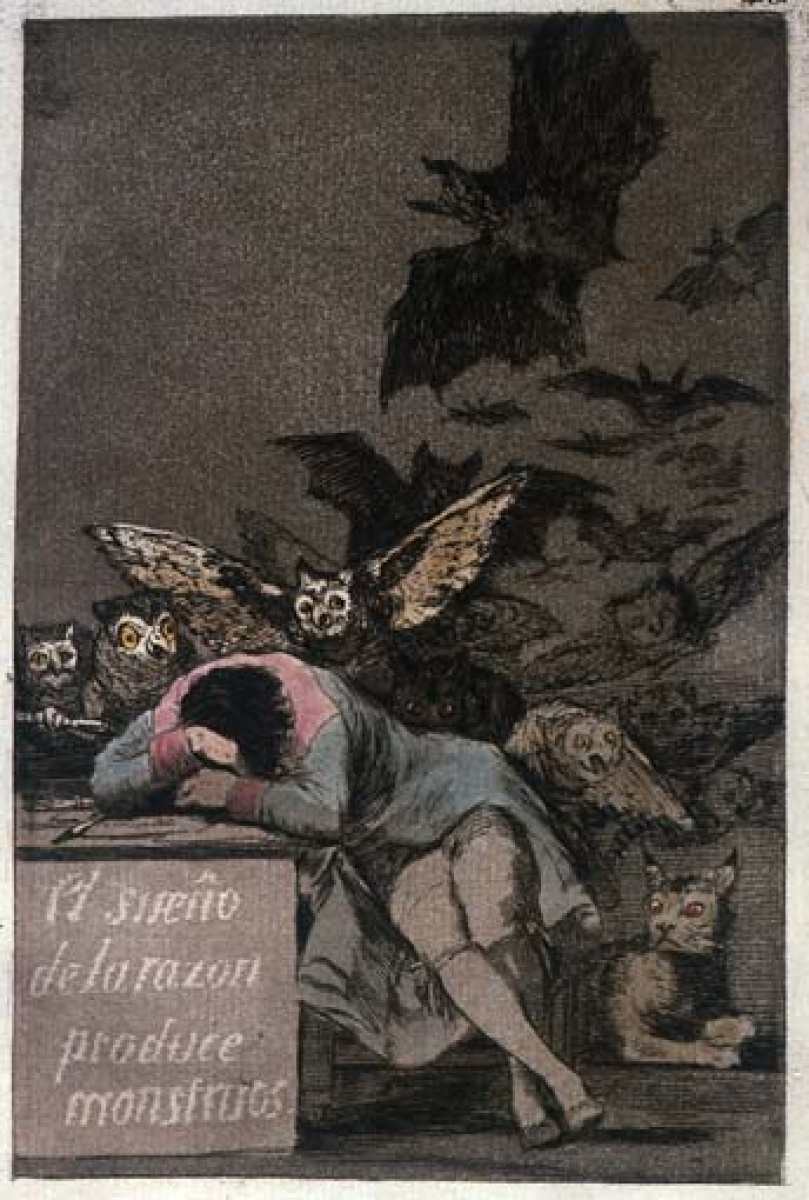 Goya and Gillray: Humour that Bites

Humour can be a powerful weapon against evil. During a turbulent time in world history, the Spanish artist Francisco Goya y Lucientes (1746-1828) and the British artist James Gillray (1756-1815) exposed the social and political ills of their respective countries. In 1799 Goya produced Los Caprichos, a series of eighty small images that are dark and often terrifying. Around the same time in England, Gillray created caricatures that are large, witty and brightly coloured. This exhibition explores the uncanny similarities and striking differences between two leading satirists and highly innovative printmakers.

Goya's Los Caprichos series was donated by Joey and Toby Tanenbaum in 1999 and Gillray's etchings were purchased over the last thirty years with funds donated by the Trier-Fodor Foundation.

By the 1790s Francisco Goya was First Painter to the Spanish King Charles IV. In 1799 he embarked on a private project, producing the experimental series Los Caprichos. Spain had a rich tradition of satire in literature, and Goya's ideas reflected those expressed by his Spanish literary contemporaries. He also found inspiration in the British caricatures that made their way into Spain. In 1808 Goya's series was called "a book of English-style caricatures with Spanish subjects".

Under threat from the powerful Spanish Inquisition, Goya withdrew the prints from sale soon after publication. The set is now regarded as a monument in the history of printmaking. 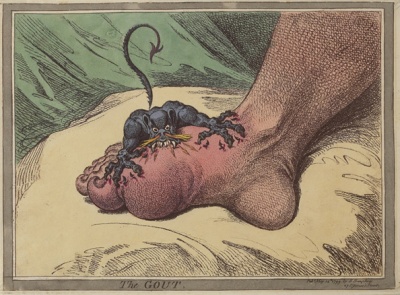 James Gillray was the leading British caricaturist of his day and the precursor to today's editorial cartoonists. His scathing, instantly recognizable caricatures find their place in a long and vibrant tradition of British satirical art. They lampooned the vices and follies of King George III and leading politicians, and reflected public opinion about newsworthy events and current scandals. His prints were installed in rotating displays in shop windows and were avidly collected by the royalty. Lack of censorship and unlicensed freedom of the press in England spawned the period called the "golden age" of British caricature from 1780 to 1820.

Both Goya and Gillray had incredible drawing and printmaking skills. Their proficiency with the etching needle to create lines, hatchings and dots was complemented by their deployment of the newly invented tonal process of aquatint to create light and dark areas that enhanced the dramatic impact of their works. While Gillray's prints were typically hand-coloured in vivid hues by professionals in his dealer's workshop, it is extremely unusual to find Goya prints with hand-colouring. In this rare set of Los Caprichos, the delicate watercolour additions were probably made by an early collector.

From the early 1790s on, Gillray was employed by the print dealer, Hannah Humphrey. Mrs. Humphrey catered to an affluent clientele that included the Prince of Wales (later George IV). Her print shop window, full of Gillray's current offerings, became a daily destination for onlookers from all classes of society. Gillray's caricatures were sold singly and fall into two categories – those created over an extended period of time with complex designs and those of a topical nature that were completed overnight in response to a newsworthy event.

A thematic series including eighty plates, Los Caprichos was financed and published privately by the artist in sets which could be bound in albums. Goya made about 300 sets, which he began to sell in February 1799. He was soon threatened with arrest because of their content and withdrew the prints from sale.

Los Caprichos prints on display were once contained in this album belonging to the Scottish art historian Sir William Stirling-Maxwell (1818-1878). A major collector of Spanish art, Stirling-Maxwell is thought to have purchased this edition of the prints directly from Goya's son. The hand-colouring (which exists in only four other early sets) is subtle and assumed to have been added by an early owner.

In his day, Gillray's works were printed and sold as single sheets with brilliant hand-colouring. However, most of Gillray's copperplates survived his death and were reprinted in the 1800s. This large folio of 580 etchings from the original plates was published by H.G. Bohn in 1851 and represents a special edition of uncoloured impressions.

Politicians, the royal family, the nobility, and the clergy have long been targets of caricature. Goya and Gillray lampooned the idle and decadent lifestyles and other excesses of the powerful and the famous. The artists also expose the corrupt activities and financial scams of the highest levels of government and the church.

In his deceptively simple compositions, which focus on one or two main figures, Goya used the newly invented process of aquatint to create oppressive, dreamlike spaces. Gillray employed a range of printmaking techniques including etching, aquatint, and engraving, often creating environments filled with symbolic details that helped to incriminate his subjects.

"They spruce themselves up": Vanity and Status-seeking

Among the follies uncovered in these prints are vanity and pride. Both Goya and Gillray depicted people with heads "full of hot air" – celebrities who desired to retain their youth, advance their careers, follow current fashion crazes, and travel in the right circles.

Note how the artists use pose, gesture and facial expressions to convey the interior motives of people. For his own protection, Goya disguised the identities of his subjects. In contrast, Gillray's subjects were immediately recognizable. He was a master of the personal caricature, often exaggerating a politician's large nose or a thin physique for comic effect.

"You will not escape": Marriage and Male/Female Relationships

"You will not escape" alludes to the conflicts lurking within male/female relationships. Both artists visually illustrate the dangers of unequal partnerships and of entering into marriage for prestige and financial gain. The young and the old, the beautiful and the ugly, the fat and the thin, are all contrasted. Both artists also depicted adulterous affairs, in which both parties are shown to be at fault and, therefore, clearly made for each other. Notice how the artists inscribe ironic titles below their images to convey additional layers of meaning.

"And his house is on fire": Prostitution and Exploitation of Women

Poverty and social conditions in the late 1700s led to many women being exploited and treated as commodities. Gillray ridicules noblemen who take advantage of women in lower classes of society, while Goya's prostitutes are unblemished youthful beauties in contrast to their elderly female mentors, the celestinas, who are ravaged by time and debauchery. Witches and witchcraft are used as metaphors for the clandestine activities of the women of the street.

In these prints the "bogeymen", those in positions of authority, use their power to intimidate or mislead others. Victims are also ridiculed for their lack of judgement and for having silly superstitions. Gillray found rampant arrogance and foolish behaviour among diplomats and the upper classes. Goya was an active participant in the Spanish Enlightenment and strongly advocated for reform of the medical and law professions, the educational system and the church. His bizarre, hybrid creatures – half-animal and half-man – suggest how egotism and stupidity can twist and disfigure an individual's inner life and subsequent conduct towards others.

"Out hunting for teeth": Cruelty and Oppression

The momentous events of the French Revolution (1789) followed by the execution of the French King (1793) and the Napoleonic wars in Europe, created a tense and charged atmosphere in both England and Spain. In England, Gillray responded with vicious caricatures attacking the French and their supporters in the British government. In Spain, Goya's veiled references to European upheaval were punctuated with more direct critiques of the Spanish Inquisition, an arm of the government and the church that held secret trials and continued to exercise a powerful and repressive censorship.