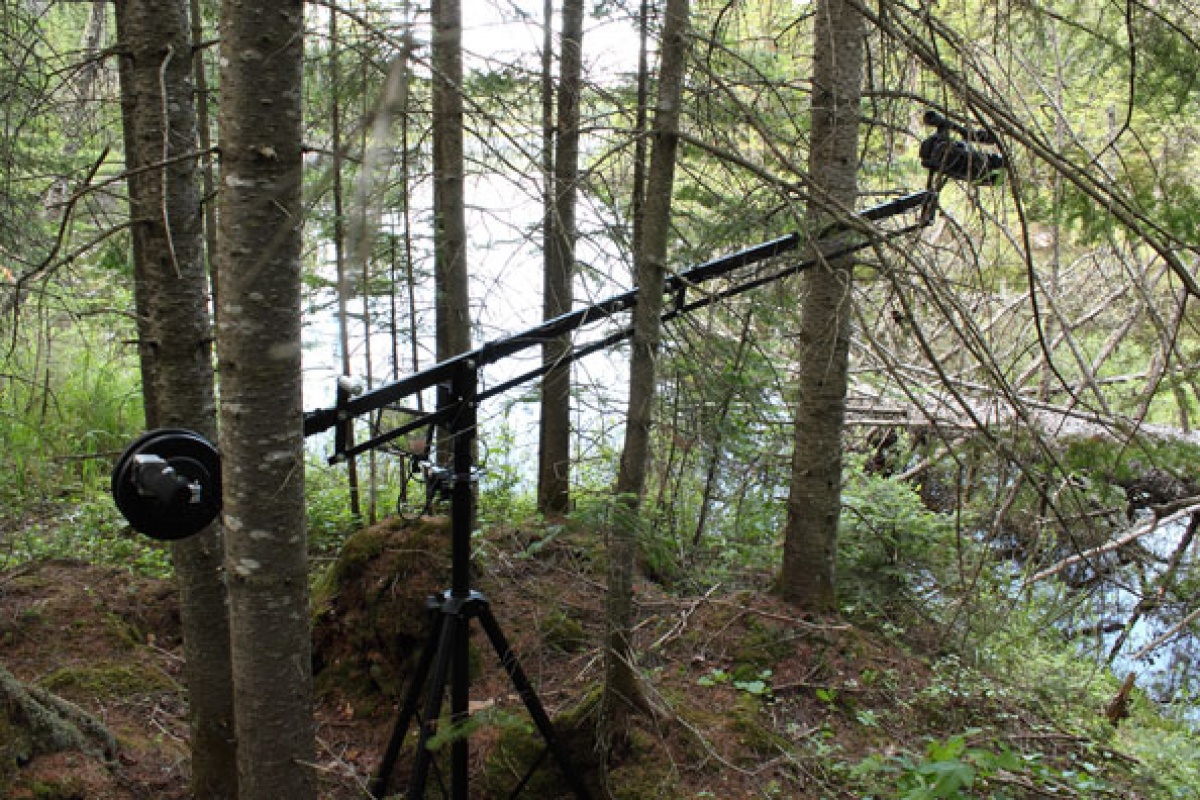 Launching the second year of the AGO’s Toronto Now series, Jon Sasaki’s Pine recontextualizes the iconic images of the Canadian landscape famously depicted by Tom Thomson and the Group of Seven, simultaneously celebrating and questioning the way in which that genre is understood. In 2010, Sasaki visited Canoe Lake in Algonquin Park, where Tom Thomson created some of Canada’s most recognizable paintings. Instead of an easel and paint-box, Sasaki arrived armed with contemporary tools of image making: a video camera and an 8-foot camera crane. The resulting Jack Pine, 8' Camera Crane, a haphazard 360 degree shot of the view depicted in Thomson’s Jack Pine (1916-1917) is far from seamless, as the crane, camera and microphone crash through the foliage that Thomson so elegantly depicted.

This installation also includes a large digital photograph, Northern River, 8' Camera Crane, that shows the same camera and crane rendered practically immobile by pine trees in a landscape reminiscent of Thomson’s Northern River (1914-1915). This image of a machine in nature also functions as a nod to images of the machine mount that Michael Snow used in his own depiction of the Canadian landscape in the epic film La Région Centrale (1971). In addition to the photograph and video, a water cooler located in the gallery dispenses potable (if swampy) water from Canoe Lake. This vessel frames and contains the landscape in a literal sense, transforming a daunting expanse of deep water into an easily controlled and consumed substance, much like the mass reproduction of paintings by Thomson and the Group of Seven has rendered mundane what was once considered avant-garde. Traditionally the site of small talk in corporate environments, the water cooler lets nature flow into culture and welcomes the audience to consume a part of the landscape that is at once threatened and threatening.

Working in the vein of 'romantic conceptualism,' Jon Sasaki utilizes primarily performance-for-video, objects, installations and interventions in work that mixes humor and pathos, often with gently antagonistic results. His work has been presented in recent solo exhibitions at The Doris McCarthy Gallery (University of Toronto, Scarborough), 126 (Galway, Ireland), Centre Clark (Montreal), and Latitude 53 (Edmonton). He has participated in group exhibitions at VOX (Montreal), The Vancouver Art Gallery, the Owens Art Gallery (Mount Allison University, Sackville, NB), Simon Fraser University Gallery (Burnaby, BC), as well as the 2006 and 2008 editions of Toronto's Nuit Blanche. Jon was an active member of the Instant Coffee art collective between 2002 and 2007. He lives and works in Toronto and is represented by Jessica Bradley Art + Projects.

ABOUT THE IMAGES FESTIVAL

The Images Festival is the largest festival in North America for experimental and independent moving-image culture, showcasing the innovative edge of international contemporary media art both on and off the screen through film, video, installation, music, and performance. The 24th edition of the festival runs from March 31 to April 9, 2011 in Toronto. For more information, visit imagesfestival.com.

Toronto Now is generously supported by The Contemporary Circle.

Contemporary programming at the AGO is supported by the