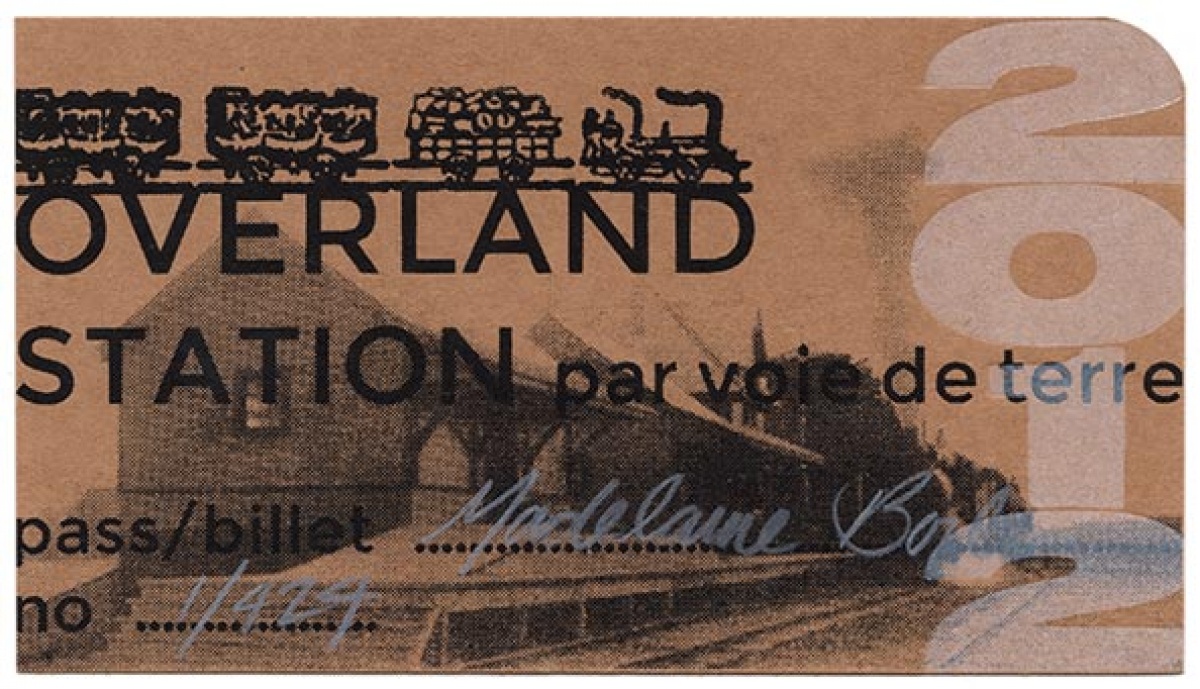 On Sunday May 13, 2012, artist Aimée Henny Brown boards a train at Vancouver’s Pacific Central Station and leaves for Toronto.  Packed in her luggage are bundles of handmade letterpress tickets, printed broadsides and blank telegrams. Each day she is onboard Brown dons a uniform, neatly arranges these printed materials, unpacks her typewriter and assumes the persona of an early twentieth-century rail station agent.  This performance, carried out twice a day within VIA Rail passenger cars, mimics the movements and actions of this often overlooked figure, one who played a critical role in linking the Canadian railway to the territories and communities it passed through.  By distributing these unique handmade printed materials and inviting others to make and send some of their own, Brown engages with passengers and creates a space that addresses this history.

As a performance artist invested in social histories and public interaction, Brown’s goal in Overland Station: par voie de terre is to generate discussion and encourage audiences to consider the history of the Canadian railroad and rail travel through a new lens, reflecting on how both have impacted notions of national identity.  While channeling a historical past, Brown also creates a platform for interaction between passengers thus stimulating a contemporary moment of social exchange. At the same time, Brown is drawing passengers’ attention to the stories that often exist at the margins of the prevailing historical narrative.

After disembarking at Toronto’s Union Station four days later, Brown will share her stories and mementos at an artist performance and public reception held at the Art Gallery of Ontario’s Weston Family Learning Centre. After this, she will repack her luggage and reprise the station agent role while retracing her route back to Vancouver.

Follow Brown's full, round-trip journey between Vancouver and Toronto at overlandstation.ca, a travel and research blog featuring photographs and other materials from Brown's site-specific performances.

Born and raised in Western Canada, Aimée Henny Brown completed her undergraduate degree in Fine Arts at the University of Alberta. After moving to Halifax, Nova Scotia, in 2005, she obtained her Masters in Fine and Media Arts at NSCAD University in 2007.  Brown’s artistic practice engages archives and research to place historical content within contemporary performance and visual art.  She has received several awards and grants, notably the Joseph Beuys Scholarship for Artistic Merit, a Canada Council Creation Grant, and an honourable mention at the 2011 Halifax Contemporary Visual Art Awards.  Brown has exhibited her work nationally and internationally, with group shows in Germany and Los Angeles, and has completed several artist residencies in North America, most recently a five-month residency with Point Pleasant Park in Halifax, Nova Scotia, and a year-long artist-in-residence program with Emily Carr University of Art and Design in Vancouver, British Columbia.

ABOUT THE COMMUNITY GALLERY

The Community Gallery in the Weston Family Learning Centre is an exhibition and project space which provides a platform for artistic experimentation and dissemination. Focused specifically on the processes of making art, and those ideas that feed into contemporary artistic practice, the gallery seeks to take risks and push the boundaries of how work is traditionally represented within formal institutions. The space draws also on the voices of those groups, regardless of age, sex, profession, and socio-economic constraints, who are at once represented and marginalized within normal institutional channels. In doing so, the Gallery steps away from conventional definitions of what is meant by the word "Community", seeking new interpretations and evolutionary paths for the possibilities of art-making. The Community Gallery is comprised of the main space and a smaller space called The Nook.