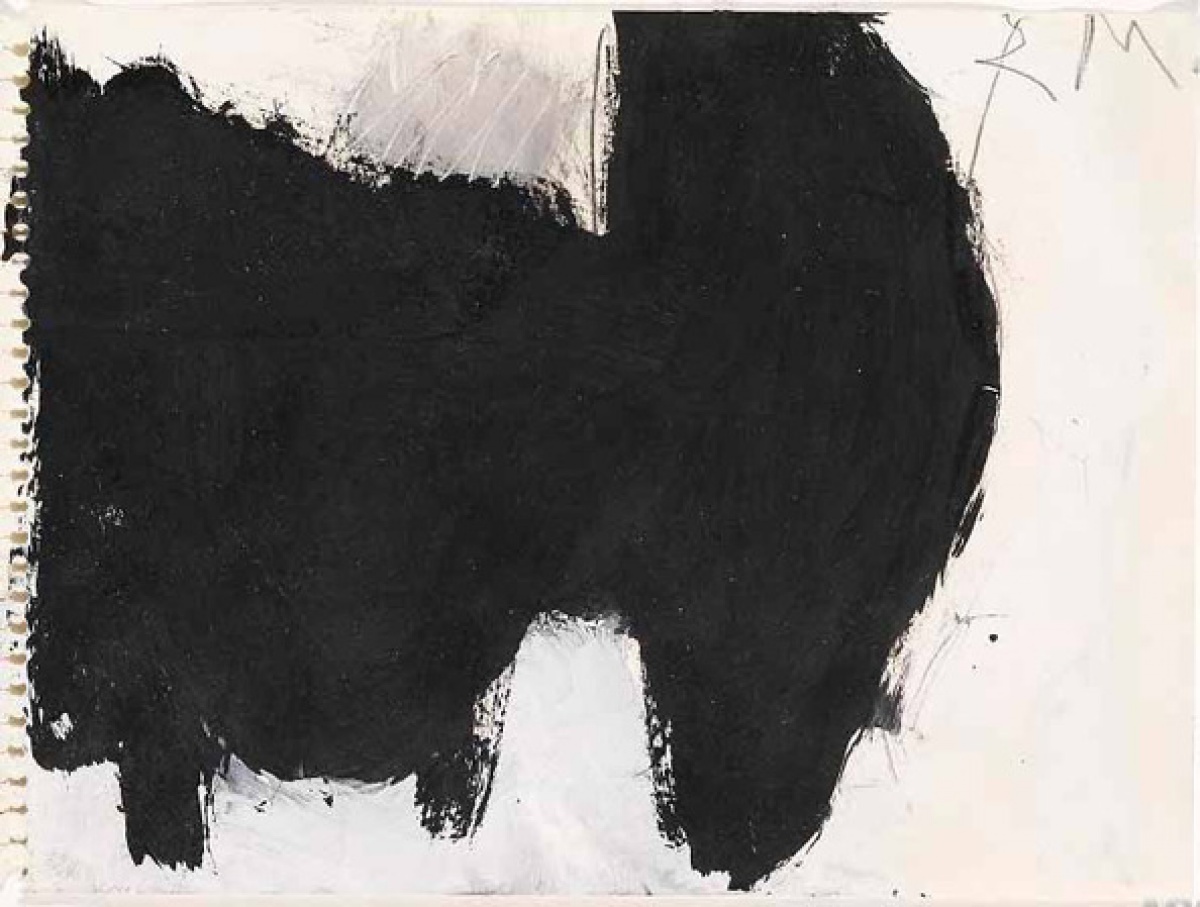 Painting on Paper: The Drawings of Robert Motherwell

Abstract Expressionist artist Robert Motherwell called paper the most “sympathetic of all painting surfaces,” remarking that “it’s a struggle to get a canvas to have the beautiful surface that paper, by nature, already has.” Motherwell drew incessantly, often “painting” on paper to explore new ideas and work through pictorial issues. His drawings reinforce his belief that ideas, emotions and the subconscious can be communicated through the gestural lines and bold forms of abstract art.

Painting on Paper: The Drawings of Robert Motherwell unveils for the first time one of the largest public collections of Motherwell drawings. The works on display were selected primarily from the 74 drawings and paintings acquired by the Art Gallery of Ontario in 1998 through a generous gift/purchase arrangement with the Dedalus Foundation, New York. The foundation was set up by Motherwell to place his works in museums and to support exhibitions, research and scholarly programs.

The exhibition covers the trajectory of Motherwell’s work over four decades and is organized around key themes to demonstrate how motifs took root in his imagination and, over time, were revisited, refined and reinterpreted.

In late autumn of 1970, Robert Motherwell was invited to speak at the Ontario College of Art (now OCAD University), hosted by AGO curator Dennis Young. When we started work on this exhibition, we trawled our audio archives hoping we had recorded this talk from over 40 years ago. We had! After transferring it to digital format, we listened and were thrilled – this lecture is Robert Motherwell personified: charismatic, erudite and open – as he reveals insight after insight in regards to Abstract Expressionism, his artistic practice and his artworks.

Robert Motherwell talks about what inspired his series of 1965 drawings called Lyric Suite. For these works, Motherwell bought 1000 sheets of Japanese rice paper, and determined to paint on them spontaneously, with no preconceptions or revisions. Motherwell abruptly stopped at around 600 sheets when he learned of the tragic death of his close friend and fellow artist, David Smith.

Listen to the full lecture below. We’ve also included a full transcript of the lecture, for your reading pleasure.

We asked current AGO curator Maia Sutnik, who was there that evening, to share with us her memories of the event.

In December of 1970 the buzz was that Robert Motherwell was in town. Of course, we all knew of him as the intellectual painter – ‘the thinker’ in the circle among the unruly Abstract Expressionists! After all, at AGO we could ponder the compositional complexity of his collage In Grey with Parasol (1947). I loved the title – it was so accessible, even though searching for Dada under-currents in the textured arrangement made me dizzy, or perhaps I had convinced myself that is what I should do. The sign of being an art – sophisticate meant to deeply interpret historical strains and influences – unlocking art’s deeper mysteries was “eureka”!

Dennis Young, AGO’s Contemporary Art Curator (Canadian and International), had met Motherwell (with Motherwell’s wife artist Helen Frankenthaler) at as dinner hosted by David Mirvish, the admired Toronto art collector and gallery owner. Young asked if Motherwell would be willing to give a talk, and to his surprise Motherwell said ‘yes’. With little space at AGO, other than Walker Court (which was not ideal on account of the gurgling Verocchio fountain with a perched “Boy with a Dolphin” that was installed there at the time), the Ontario College of Art offered its auditorium. As I entered it was at capacity, clearly the buzz had gotten around quickly. Myself taking considerable pride in having tackled Motherwell’s anthology “Dada Painters and Poets,” I was excited. Now, many questions would be answered: what did he really mean with l’art modern in relation to Dada politics? And surely he would have opinions about the “new guard”: Post-painterly Abstraction, the art scene – Pop Op, happenings, environments, sound. And surely a word about Johns, Cage, Rauschenberg – maybe even Oldenburg and Warhol! Such were the art world’s seductions then – ever so important to be hip.

All of my anticipations vanished. Motherwell sat on the stage, seemingly comfortable in a large chair. There was a far off table, perhaps to hold water, and he spoke softly, taking long pauses, long enough to wonder if he would say anything again; but, it became clear that each time he constructed his sentence fully formed in his mind. Now and then he referenced a profound quote as he spoke about his work – or so I recall. Lyric Suite – brushes and blank white paper! Wrist movement, black ink! The slides were assuredly beautiful. Awestruck, all my Dada fantasies vanished. I sat mesmerized in an extended moment, one which I felt more profoundly, than remembering any words.

Next day, I asked others of their thoughts on Motherwell’s the talk, someone said: Of course, Dada painters and poets was the key influence on Rauschenberg! What had I missed!? All I recall was being transported to some poetic Motherwellian shore. Probably it was another one of my art-romance crushes! Now, 40 years later, I must carefully listen to the lecture tape.

Maia Sutnik is the Curator, Special Photography Projects at the Art Gallery of Ontario.