Wayne Baerwaldt is currently Director/Curator of Exhibitions at the Alberta College of Art + Design in Calgary. He has previously been the Director of Plug In Gallery in Winnipeg and Director of The Power Plant in Toronto. Baerwaldt acted as Co-commissioner and Curator for Janet Cardiff and George Bures Miller’s double-award-winning production, The Paradise Institute, at the 49th Venice Biennale (2001). He has curated numerous touring exhibitions including Under the Influence of Fluxus (1991–1993), Pierre Molinier (1994–1998), Joep van Lieshout-Collection 96 (1996), Beck & Al Hansen: Playing With Matches (1998–2001), and The Royal Art Lodge: Ask the Dust (2003 and touring) among others. He recently co-curated with Thelma Golden a major mid-career exhibition of work by Glenn Ligon, which opened at The Power Plant (2005). 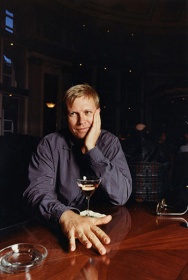