Gayatri Sinha is an art critic and curator based in New Delhi. Her primary areas of inquiry are around the structures of gender and iconography, media, economics and social history. As a curator, her work has cited the domains of photography and lens-based work from archival and contemporary sources. She has edited Voices of Change: 20 Indian Artists (Marg Publications, 2010), Art and Visual Culture in India 1857–2007 (Marg Publications, 2009), Indian Art: An Overview (Rupa Books, 2003), Woman/Goddess (1998), and Expressions and Evocations: Contemporary Indian Women Artists of India (Marg Publications, 1996). She has curated extensively in India and abroad including at the India Art Summit and the Korean International Art Fair (2009), the Newark Museum and Minneapolis Institute of Art (2008–2009), Fotographie Forum, Frankfurt (2006), the National Museum, New Delhi (2004), the Festival of India in Bangladesh (1997) and The National Gallery of Modern Art (1996). As an art critic, Sinha wrote columns for Indian Express and The Hindu, and has written monographs on the artists Krishen Khanna and Himmat Shah. She has lectured on Indian art at the Tate Modern, Tate Britain, National Museum, Japan Foundation, Tokyo, and Asian Art Museum, Singapore, among others. 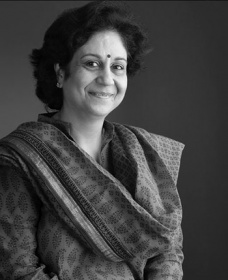