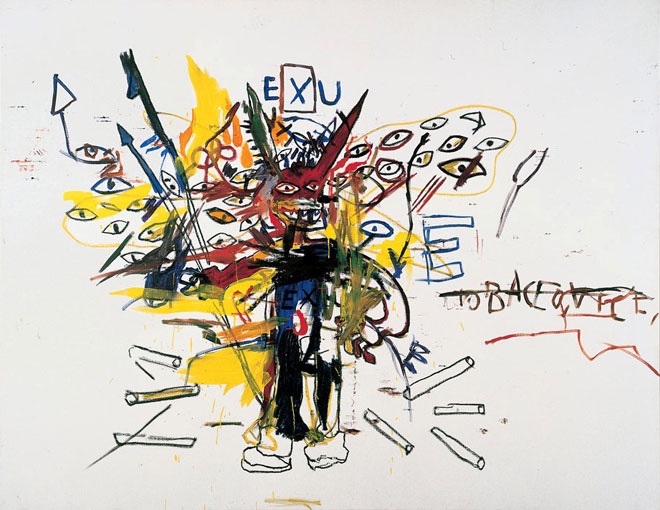 TORONTO — Famous by age 20 for his groundbreaking drawings and paintings, Jean-Michel Basquiat (1960–1988) took the cultural hotbed of the New York art world by storm in the early 1980s. Basquiat gained international recognition by creating powerful and expressive works that confronted issues of racism, politics and social hypocrisy. Although his career was cut short by his untimely death at age 27, his works remain hugely influential. Opening Feb. 7, 2015, at the Art Gallery of Ontario (AGO), Jean-Michel Basquiat: Now's the Time marks the first-ever major retrospective of the artist’s work in Canada and will feature roughly 100 large-scale paintings and drawings from private collections and public museums across Europe and North America.

Described by the artist himself as a “springboard to deeper truths about the individual,” Basquiat’s vivid and poignant works were always highly conceptual in their exploration of race, class and fame using the motifs of New York street culture. Though Basquiat was not a street artist, his work was intrinsically linked to the urban environment, beginning in conceptual graffiti, referencing street art in his paintings and using salvaged materials such as abandoned doors and packing crates as canvases.

In 1976, Basquiat and his friend Al Diaz began spraypainting the walls of lower Manhattan under the pseudonym SAMO©, alluding to the saying “same old shit.” Their work cleverly used and manipulated text to provoke those who walked by. Eventually Basquiat’s renown grew, as he started a noise rock band, appeared in Edo Bertoglio’s indie film Downtown 81 and struck up a friendship with Andy Warhol. In 1982 — when he was 21 — Basquiat’s first solo show sold out. Experiencing sudden popularity, he found himself sharing ideas with David Bowie, briefly dating Madonna, appearing in music videos and gracing the cover of The New York Times Magazine. Now, more than 25 years after his death, his influence remains. His work is collected by celebrities and institutions alike, and he has been referenced in the lyrics of many contemporary rap artists including Jay-Z, Macklemore and Kanye West.

“Jean-Michel Basquiat was nothing less than a game-changer for the art world,” said Matthew Teitelbaum, the AGO’s director and CEO. “His extraordinary talent helped establish compelling new forms of expressionist painting while confronting the most important and incendiary social issues of 20th-century North America. This exhibition offers a tremendous opportunity for AGO visitors to contemplate art as a tool of social provocation and to see how Basquiat’s approach and subject matter still reverberate in our world today.”

Guest curated by renowned Austrian art historian, curator and critic Dieter Buchhart, Jean-Michel Basquiat: Now's the Time will be the first thematic examination of the artist’s work. Basquiat’s groundbreaking and provocative artistic approach translated 1980s New York into a radical visual language, one that confronted issues of racism, class struggle, social hypocrisy and black history. Inspired as much by high art — Abstract Expressionism and Conceptualism — as by hip hop, jazz, sports, comics and graffiti, Basquiat used recurring motifs to explore issues that he continuously grappled with in his life and art.

“Basquiat’s biggest breakthrough wasn’t about success for himself but for a whole generation of black artists,” said Buchhart. “This will be the first exhibition ever to consider his art thematically and that — in itself — represents a necessary change in how we appreciate his work. Now is the time for us to go beyond his personal story and consider his art, exploring how the images and symbols he co-opted from the streets have since spread into popular culture.”

Highlights of the exhibition include:

Jean-Michel Basquiat: Now's the Time runs from Feb. 7 through May 10, 2015, at the AGO, in its only Canadian stop.  An AGO-produced exhibition catalogue will be available for sale from shopAGO and online, featuring contributions from Olivier Berggruen, Francesco Pellizzi, Glenn O’Brien, Christian Campbell and Franklin Sirmans.

AGO members will be offered free admission to Jean-Michel Basquiat: Now's the Time and an exclusive preview in the days leading up to the exhibition’s opening. More information on the benefits of AGO membership can be found at www.ago.net/general-membership.

ABOUT THE AGO
With a collection of more than 80,000 works of art, the Art Gallery of Ontario is among the most distinguished art museums in North America. From the vast body of Group of Seven and signature Canadian works to the African art gallery, from the cutting-edge contemporary art to Peter Paul Rubens’ masterpiece The Massacre of The Innocents, the AGO offers an incredible art experience with each visit. In 2002 Kenneth Thomson’s generous gift of 2,000 remarkable works of Canadian and European art inspired Transformation AGO, an innovative architectural expansion by world-renowned architect Frank Gehry that in 2008 resulted in one of the most critically acclaimed architectural achievements in North America. Highlights include Galleria Italia, a gleaming showcase of wood and glass running the length of an entire city block, and the often-photographed spiral staircase, beckoning visitors to explore. The AGO has an active membership program offering great value, and the AGO’s Weston Family Learning Centre offers engaging art and creative programs for children, families, youth and adults. Visit ago.net to find out more about upcoming special exhibitions, to learn about eating and shopping at the AGO and to register for programs and to buy tickets or memberships.

The Art Gallery of Ontario is funded in part by the Ontario Ministry of Tourism, Culture and Sport. Additional operating support is received from the City of Toronto, the Canada Council for the Arts and generous contributions from AGO members, donors and private-sector partners.