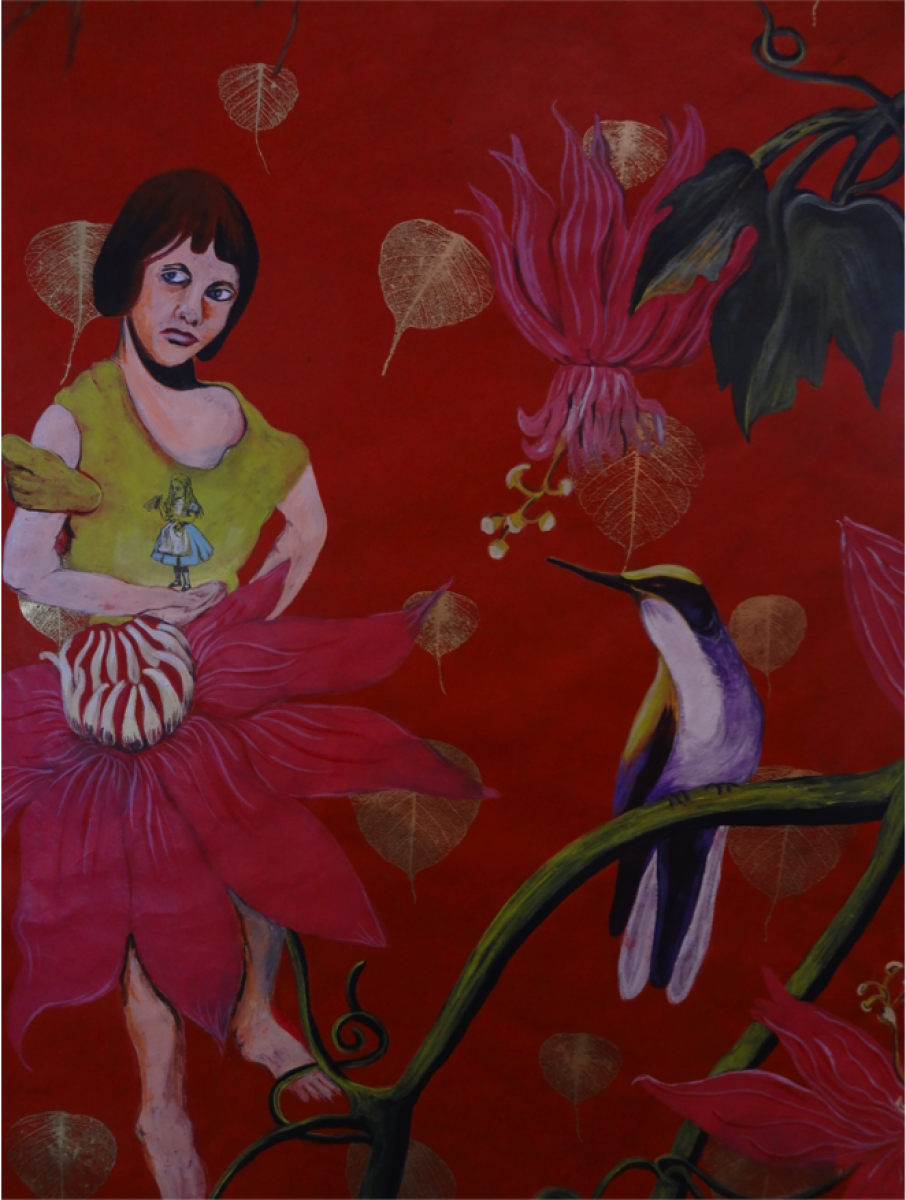 Alice meets Alice in the Garden, Acrylic Paint on Paper © 2015

I joined the AGO staff in 1979 after completing a Master's degree in Montreal. I am originally from Vancouver, where I studied at UBC and the Vancouver School of Art, now the Emily Carr University of Art and Design.

The excitement of being part of the inspiring AGO community has never diminished. The AGO is a second home that I miss dearly. I am an Adult Studio Instructor in the Gallery School as well as an Education Officer, working with schools during their visits to the AGO. I miss the experience of interacting with adult learners in my Introduction to Drawing Class as well as the reactions to the AGO Collection by young learners. Children never fail to amaze me with their insightful comments on the art being viewed. Friday night Drawing and Drinks, beginning in the friendly atmosphere of AGOBistro, then moving to the art collection for inspiration is a social experience that is rewarding on many levels. This too is greatly missed.

At the moment, my life feels like Lewis Carroll’s Alice in his books, Alice's Adventures in Wonderland and Through the Looking Glass; disoriented at times and full of questions. Many artists, using various creative outlets, have been inspired by these books. The paintings that I created are based on the premise that the real Alice, Alice Liddell, experienced the voyage to Wonderland, and sometimes she even meets the fictional Alice. I replaced the traditional Alice illustration by John Tenniel with an image based on a photograph of Alice taken by Lewis Carroll.

Alice Liddell has been the centre of attention in a variety of artistic endeavours, including a stage play written by John Logan. The play is inspired by the real-life meeting of Alice Liddell Hargreaves and Peter Llewelyn Davies, the inspiration for Peter Pan. It explores the sometimes negative impact of being the subject for two classic children’s novels.

I was fortunate to see the play in London, England with Dame Judi Dench playing Alice.

In Alice in Wonderland, curiosity leads Alice on an adventure far from home. After many trials and tribulations, finds her way back to her family and her cat, Dinah. Home is the focus of our lives, some of us were caught far away and struggled to find our way back, just like Alice.

Here are several images from my series of paintings:

The White Rabbit needs to return to his home to fetch his fan and white kid gloves. He sends Alice to his home mistaking her for his housemaid, then chaos ensues. 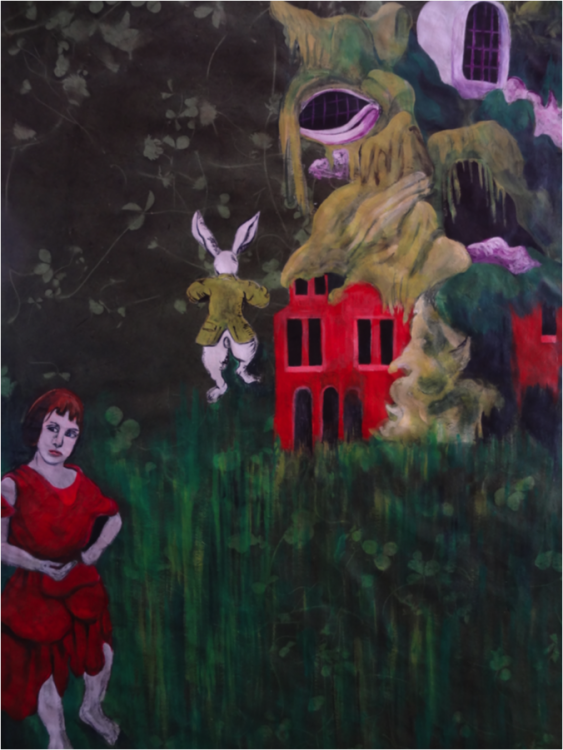 The chief difficulty Alice found at first, while preparing for the Croquet Match, was the management of her flamingo. As she attempted to control the creature, it twisted itself round and looked up into her face with a puzzled expression. Her life had become an endless maze. 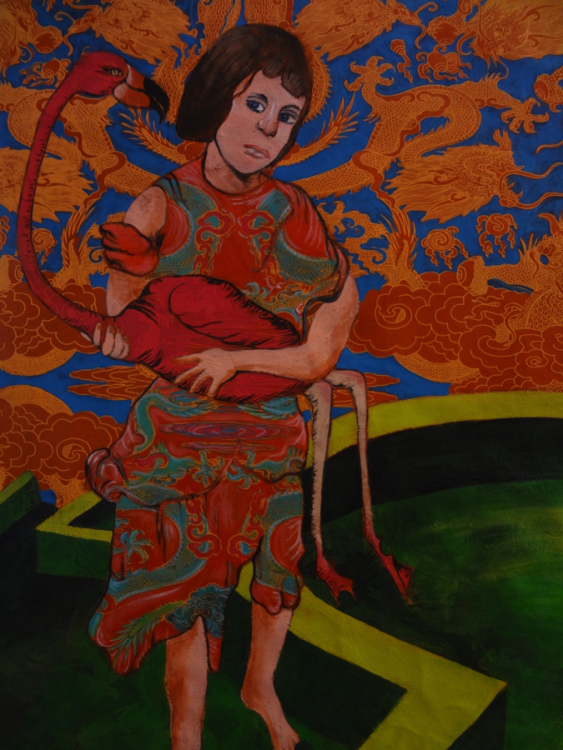 The Dodo organized a Caucus–race. After running half an hour or so, the Dodo suddenly called out “The race is over!” and they crowded round it, panting and asking “But who has won?” 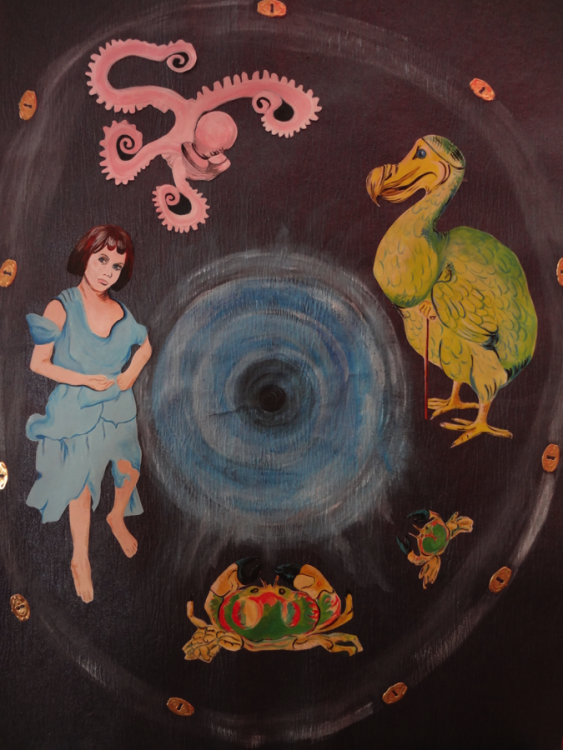 Tweedledum is having a frustrating day, his rattle has been damaged. Alice cannot see what all the fuss is about, however, Tweedledum needs someone to blame. 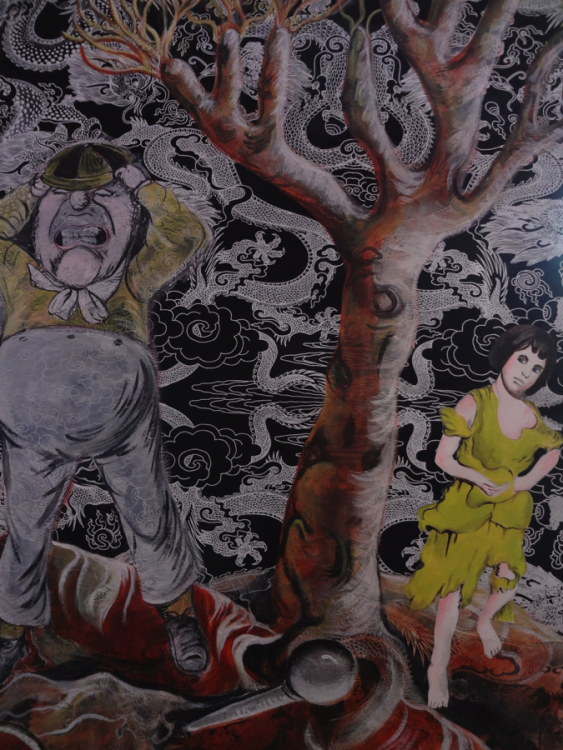 The White Rabbit hurries away, splashing in the pool of water as he goes. Alice makes her way home with the memories of Wonderland running through her mind. What will our memories be of this very strange world that we are living in? 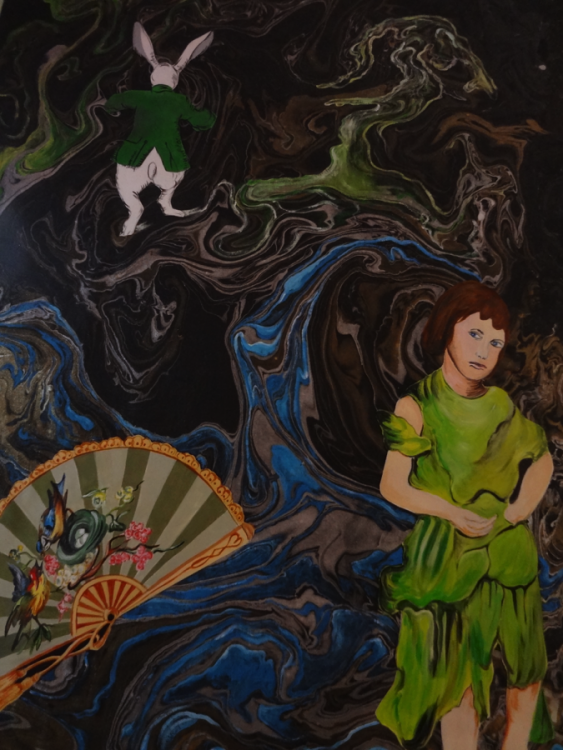