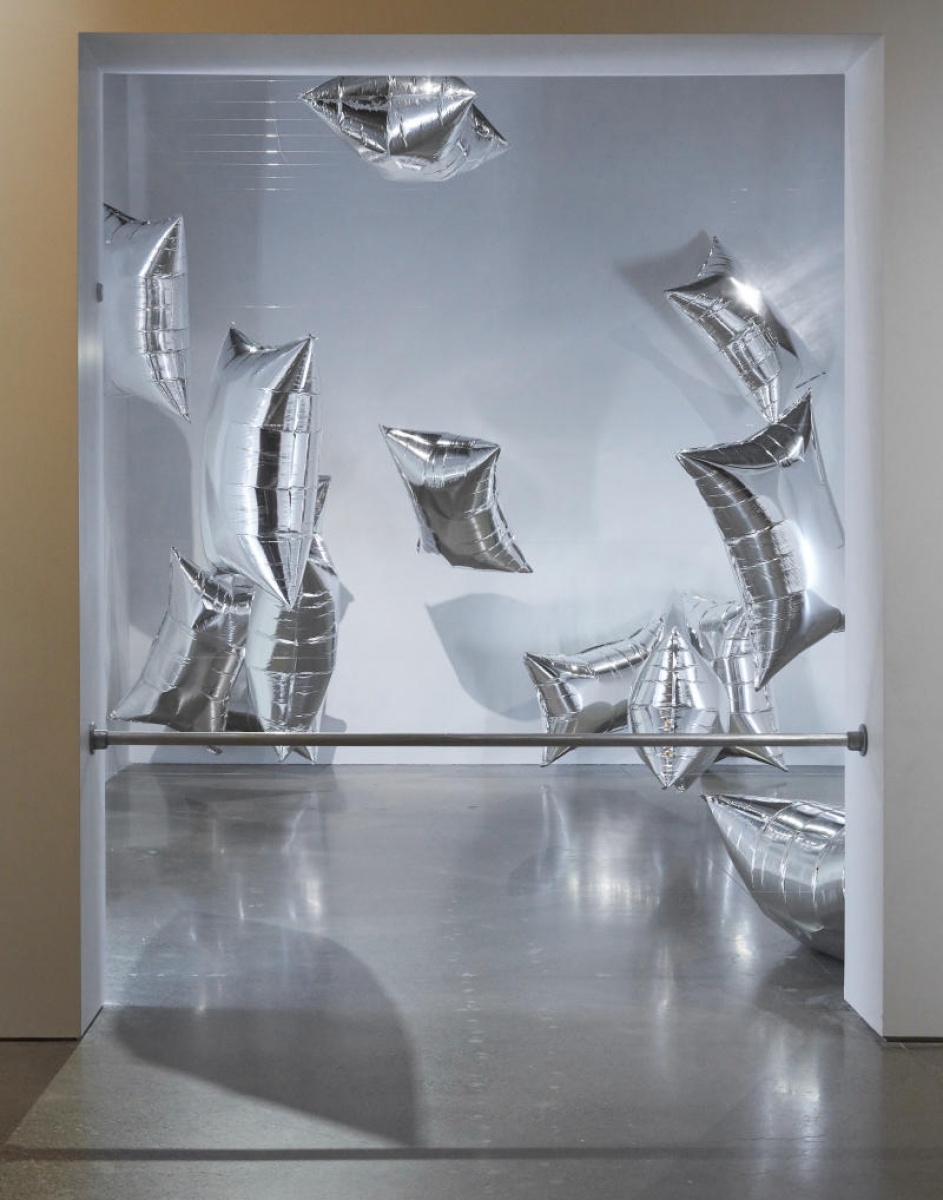 There might be no sight so mesmerizing, so calming this summer than Warhol’s Silver Clouds, an installation of many shiny, silver, inflated rectangles floating and dancing inside a white square, propelled on a gentle stream of air. The sound they make when they bump against each other, barely audible, can only be described as a cross between a pleasing ‘fup’ and an embarrassed ‘bouf’.

How exciting is it to learn that the creation of this joyful wonder contains within it a story of artistic rivalry and a dispute over the purpose of painting? To better understand the inspiration behind Silver Clouds, we turned to Kenneth Brummel, AGO Associate Curator, Modern art, curator for the AGO’s presentation of Andy Warhol and author of the revealing essay, Silver Clouds Making Donald Judd Float.

Unsurprisingly, Silver Clouds has been a hit with audiences ever since its debut in 1966. Brummel writes, “Made out of Scotchpak, a silver laminate material sourced by the Bell Laboratories engineer Billy Kluver, that Warhol and his assistants cut, folded and sealed before inflating it with helium, Silver Clouds had its first unveiling at Leo Castelli Gallery, New York, on April 2, 1966. The ‘pillows’, as they are often called, captivated the gallery-goers. Glinting under the lights, their steely, metallic surfaces occasionally disappeared into the space around them.”

That evening, Brummel recounts, “Warhol opened one of the gallery’s windows and liberated one of his Scotchpak constructions. As the silver rectangle sailed up and above New York City’s rooftops, Warhol, in his typically deadpan manner, dryly declared, ‘That would be the end of painting.’”

But what did he mean by that? No one familiar with Warhol’s penchant for embellishment can be surprised by the enormity of such a claim, but what was he getting at? The answer, Brummel explains, is that it was merely one part of an ongoing artistic duel between Warhol and another famous and influential American artist, Donald Judd.

“Throughout the mid-1960s, Judd was openly hostile to Warhol and his work,” writes Brummel. “In the May–June 1963 issue of Arts Magazine, for example, Judd flippantly dismissed Warhol in one of his exhibition reviews as an artist who could ‘only paint.’ Two years later…Judd cast similar aspersions when he belittled Warhol for creating only ‘a small amount’ of three-dimensional work. Downplaying the importance and relevance of the box sculptures Warhol exhibited on two occasions in 1964, this last comment was inaccurate and unfair. Even if Warhol was not one to worry about vicious put-downs or negative reviews – to him they were just free publicity – he must have felt compelled to respond. His April 1966 exhibition at Castelli provided the perfect opportunity, as it followed on the heels of Judd’s solo show at the same gallery from February 5 to March 2, 1966. At Castelli, Judd installed for the first time in North America one of his now-famous vertical ‘stacks.’”

Since the early 1960s, Brummel reminds us, Judd had been arguing that European painting was obsolete. Rejecting painting’s long history of depicting fictional objects and spaces on two-dimensional planes, Judd opted instead to fabricate real objects that occupied three dimensions, claiming in them a unity unseen in painting.

“Having had ample opportunity to study Judd’s column of seven galvanized iron boxes while working with Castelli’s staff in February 1966,” says Brummel, “Warhol explicitly lampooned these objects’ three-dimensionality and unified, metallic surfaces when he presented his boxlike Silver Clouds just two months later in the same exhibition space. Aggressively engaging Judd in a game of ‘anything you-can-do-I-can-do-too’, Warhol hoped to demonstrate with Silver Clouds that he was indeed capable of producing more than just ‘a small amount’ of three-dimensional art.”

For Brummel, this means that when Warhol released one of his Scotchpak concoctions out of Castelli’s window in April of 1966, he was making it abundantly clear to everyone present that his work was not “a sacrosanct unity but a loose and constantly shifting assemblage of removable and replaceable parts. Instead of uttering ‘that would be the end of painting’ when he freed one of the boxlike Silver Clouds on April 2, 1966, Warhol might have been more literal and less ironic, simply stating, ‘That would be the end of Donald Judd.’”

Silver Clouds (1965-66) will be on view as part of Andy Warhol, until October 24. To read the full version of Kenneth Brummel’s essay, visit shopAGO in-Gallery or online to pick up the exciting exhibition catalogue Andy Warhol, edited by Gregor Muir and Yilmaz Dziewior, and published by Rizolli.