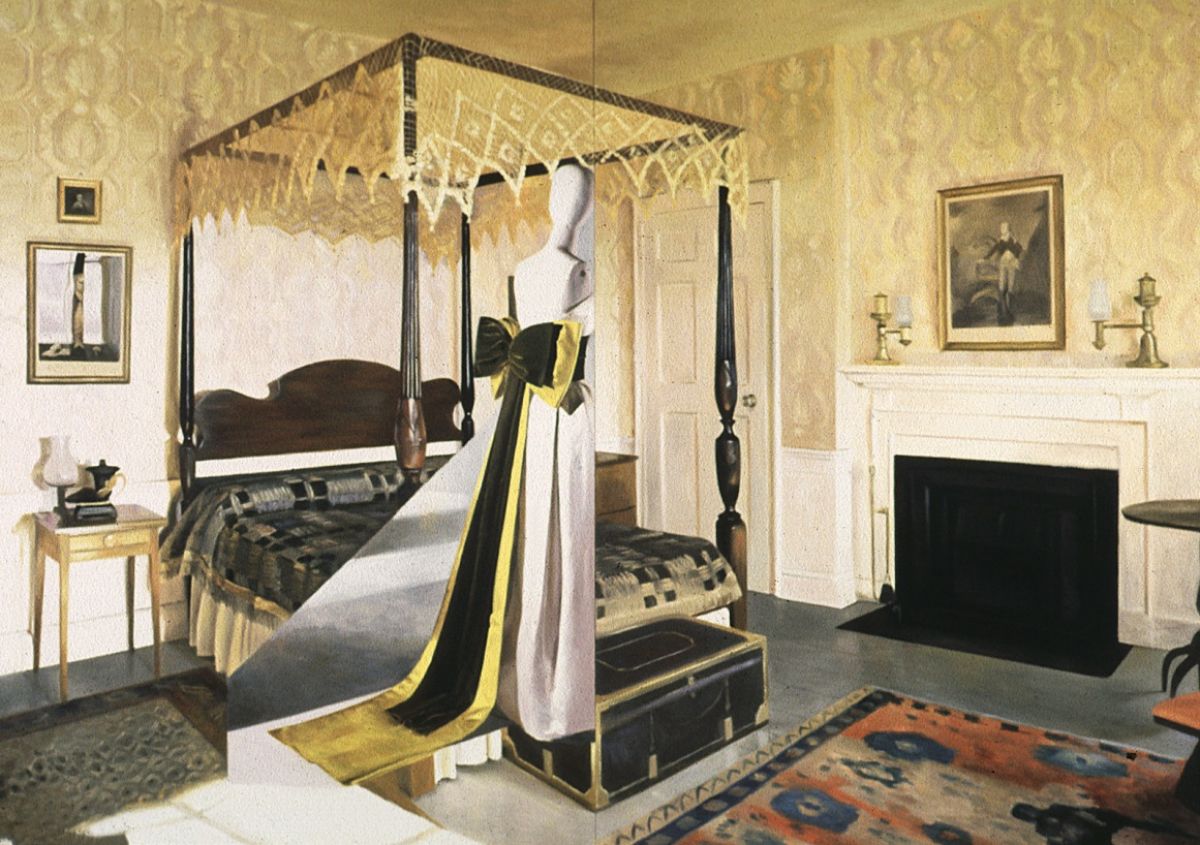 Equal parts serene and stifling, the exactitude of the bedroom portrayed in Joanne Tod’s painting Orange (1991) is enough to make you believe it exists somewhere in the world. And then your gaze shifts and you realize that the female figure at the centre of the work is faceless and floating, about to disappear into the central axis of the painting.

Best known for critiquing the anxieties of our times, Tod creates hyperrealistic backdrops for her surreal, often witty, confrontations with feminism, racism, politics and corporate power. Orange is on view now on Level 2 in the J.S. McLean Centre for Indigenous & Canadian Art, and to celebrate, we caught up with the artist to learn more about it and why she keeps deleting her art on Instagram.

AGOinsider: The setting for this painting is a highly realistic 19th-century bedroom. Is the room a portrait of anywhere specific? Likewise, do the colonial portraits signify anyone in particular?

Tod: With its canopy bed, Kilim rug and accoutrements of prosperity, the painting depicts a New England Colonial bedroom and alludes to a particular time in history. The portraits are indistinct, but clearly represent individuals of upper-class stature.

AGOinsider: The faceless female figure in this painting disrupts the image, floating, like a ghost or time traveler, radically changing how we see the room. Why position her to the left of the line that bisects the painting?

Tod: This painting was inspired by an American tradition, thought to have started with Puritans in New England and revived fervently during the 1991 Gulf War. Women (usually) would tie yellow ribbons around trees as a symbol of remembrance and support for soldiers away at war. In Orange, the featureless mannequin with a yellow sash is emblematic of this ritual.

I have often utilized a compositional strategy in my work, creating the illusion of an image seemingly disappearing into the physical space between the individual sections of the painting. Here, the spectral figure is drawn into an abyss, which for me epitomizes the endless and unresolvable nature of conflict.

AGOinsider: Your use and command of detail is extraordinary, accentuating the politics that construct our most private spaces.  Do you think there is any space where women can be anonymous and/or unencumbered?

Tod: Women should not have to be anonymous, nor should they want to be. Unencumbered to me suggests financial self-sufficiency, and therefore the freedom to enjoy autonomy, dignity and choice.

AGOinsider: What has your experience as an artist during the COVID-19 pandemic been thus far?

Tod: I enjoyed many excellent online cultural webinars and Zoom presentations, the AGO’s included. In addition, several panel discussions regarding race, gender and equity were illuminating and inspiring.

Like many artists who spend time alone in the studio, the situation didn’t really alter my daily practice. However, my focus and medium shifted and I am presently making a music video. This is an exciting new challenge involving virtual collaboration.

AGOinsider:  You referred to Instagram as an excellent platform for temporary exhibitions, a place where you can post new work and then delete it, which is exciting. But why not archive it all?

Tod: That’s what my website is for, to archive work. I joined Instagram just before the pandemic lockdown. Initially I was experimenting, trying to create compositions that could only be viewed holistically if one visited my page to see, for example, a single image coalescing in a block of nine squares. I’ve done a lot of watercolour painting since March, and would post a series, take it down and replace it with another. And I never expected to begin an exchange with a number of West African artists. In fact, my first live Instagram experience was a dialogue between a Nigerian scholar and a senior artist from Lagos. It was a profound moment and I thought fondly of Marshall McLuhan.

AGOinsider: Orange will be installed beside mid-century paintings by Canadian artists Marie Anne Simard and Doris Jean McCarthy, both of whom depict their kitchens. Do you think the kitchen remains the loaded visual symbol it was for them?  And why does every good party always end up in the kitchen?

Tod: It's an honour to be in such good company! Contemporary kitchen design often hides the appliances with neutral cupboards. This is ostensibly about concealing clutter, but a more insidious interpretation is that it’s camouflaging a fundamental aspect of women’s labour, making it invisible, anonymous. Maybe the party won’t end up in the kitchen as we won’t know where it is. Anyway, what party?

Admission to the AGO is always free for AGO Members, AGO Annual Pass holders and visitors 25 and under.