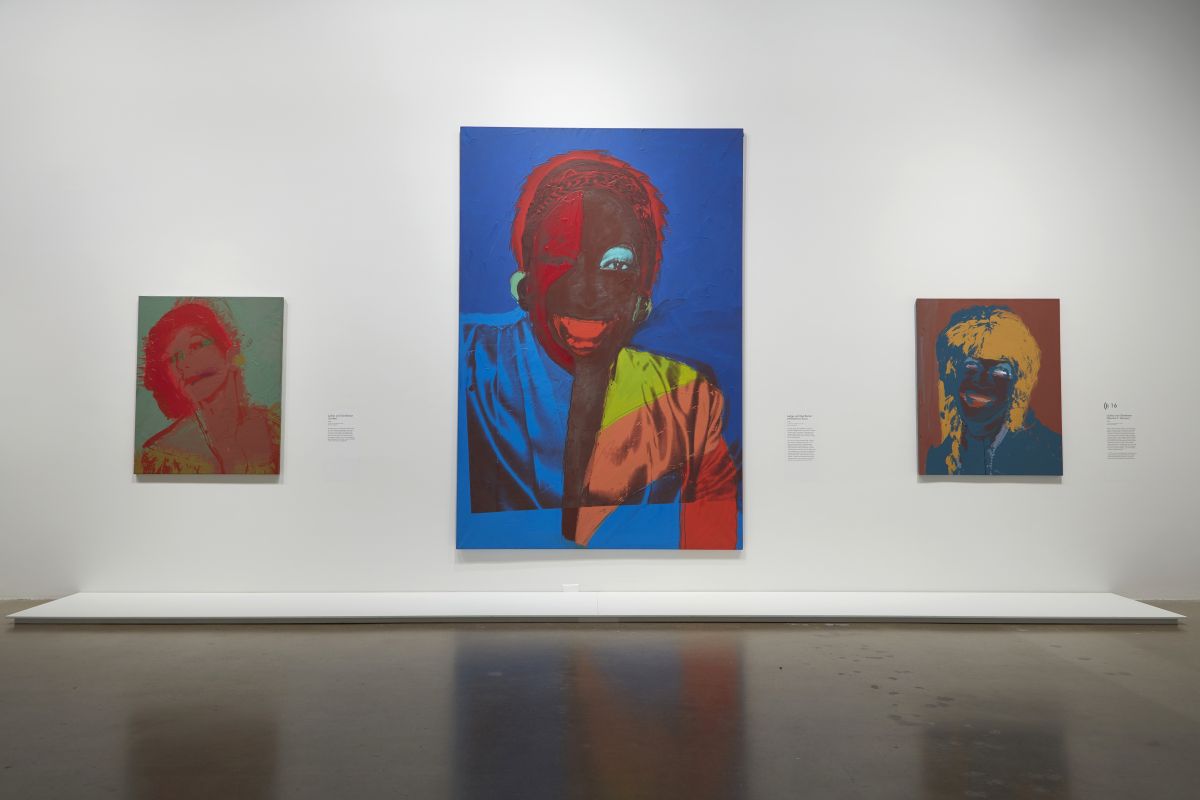 Since opening last July, the blockbuster exhibition Andy Warhol has been heralded by the Toronto Star as “ a blockbuster” and praised by The Globe and Mail for its “revelatory curatorial insight”. The show helped us get up close and personal with the Pop art icon, revealing through paintings, installations and multimedia the influences of his working-class background, his Catholicism and his homosexuality. But like all good things, this too must pass and the exhibition at the AGO must close on Sunday, October 24 before heading to the Aspen Art Museum in Colorado.

Before we say good-bye, let’s take one last look and celebrate one of the exhibition’s highlights, Warhol’s portrait series Ladies and Gentlemen (1975). Featuring anonymous Black and Latinx drag queens and trans women, the portraits were commissioned in 1975 for $900,000 by the Italian art dealer Luciano Anselmino. Anselmino was interested in the dramatization of gender more than the lived experience of the models themselves. Little is known about the sitters’ identities, with only a few signing their name on the back of Polaroids. For this series, Warhol took more than 500 photographs of 14 models. The subjects received a small fee for posing (the majority were paid $50 per half hour); they were recruited by Warhol’s friends from local drag bars.

The result is a complex, colourful portrait series of a marginalized community. But the questions they raise, seen now in 2021, make us pause. Which is why throughout the run of the exhibition, visitors have been invited to leave their comments about these works, prompted by the question: Do you think Warhol is expressing empathy in these portraits of New York’s trans community, or are these works exploitative?

“We always seek to find the contemporary relevance in all art we show, and to be clear about its context. Warhol created the Ladies and Gentlemen series in 1975 and seeing it through the lens of the current moment raises interesting questions – we have been extremely interested to see the comments come in throughout the run of the exhibition,” says Gillian McIntyre, an Interpretive Planner with the AGO. “An important role of the Gallery is to provide a safe forum for the discussion of important contemporary issues.”

Here’s what some of our visitors had to say:

Given his preoccupation with “art as business”, I’m hesitant to give Warhol too much credit in the area of empathy for his sitters. It is mentioned that his sitters received a fee that was most likely nominal. In light of the socio-political climate of the 1960-‘70s, these Black, Brown and Queer individuals would have stood to gain a lot more if empathy translated to advocacy and protection/safety.

I have the impression, based loosely on what little I know of Warhol, that he was interested in exploring marginalized people in a socially provocative way, to demonstrate his affinity with their subculture and push the boundaries of what was accepted in the culture regarding sexuality and gender identity. He may simply have used these sitters as objects but he used some so often that he must have had some sort of connection with them as individuals. I think given the lack of general acceptance of this group at the time it is somewhat revisionist to consider it exploitative but no doubt there is an argument there that can’t be ignored.

The nature of portraiture now is exploitative. It’s impossible to display these here and have them worth more than the lives of the people in them—millions and millions of dollars more. We are profiting off of their expression. But the portraits themselves are beautiful and uplifting. Good luck.

The fact that all the images are cut down the middle and have two different sides makes me think that Warhol was empathetic towards the sitters. By doing this, he was highlighting that the sitters were leading double lives.

Profound question and timely amid the rapid response, media-scape of the present. Given the Warhol business model which frames this gallery, it is more probable that while Warhol empathized with his “sitters,” in the long run they were exploited. The “sitters” no doubt gained some immediate pleasure, exposure, and fleeting fame, for they were active participants. Nevertheless, none of this insulated them from social stigma and discrimination rampant at the time. Most, it seems, died marginalized and isolated, unknown even as aspects of Warhol’s continued fame and market value. The same question may be asked of many artists. I think of Diane Arbus, for example. In my view, however, she felt much more “empathy” (a difficult term, at any rate) for those she photographed than Warhol reveals about himself in these images.

It's a matter-of-fact expression. It's honesty.

I think it is hard to say for sure without talking to the sitters themselves about how they feel. If it is exploitative then perhaps showing them at all is wrong? Or would that miss the point entirely? And is this dialogue about exploitation part of meaningful change? Or are we merely padding ourselves on the back for a moment? I'm not sure.

Warhol was a member of the community he was depicting and as exhibited by his thematic oeuvre was committed to exploring gender and sexuality, which likely means he wasn't being deliberately exploitative. That said, being a white gay man presenting black trans women meant that Warhol was taking the story of these women for his own personal gain, even if it wasn't his intention. Additionally, the differing legacies of Warhol and many trans women of the time illustrate that his depiction of them led to his own celebrois.

Don’t miss your chance to have your say and to see Andy Warhol before it closes October 24.  For tickets, please visit tickets.ago.ca/. And don’t miss other current exhibitions including Picasso: Painting the Blue Period, Fragments of Epic Memory and Matthew Wong: Blue View.