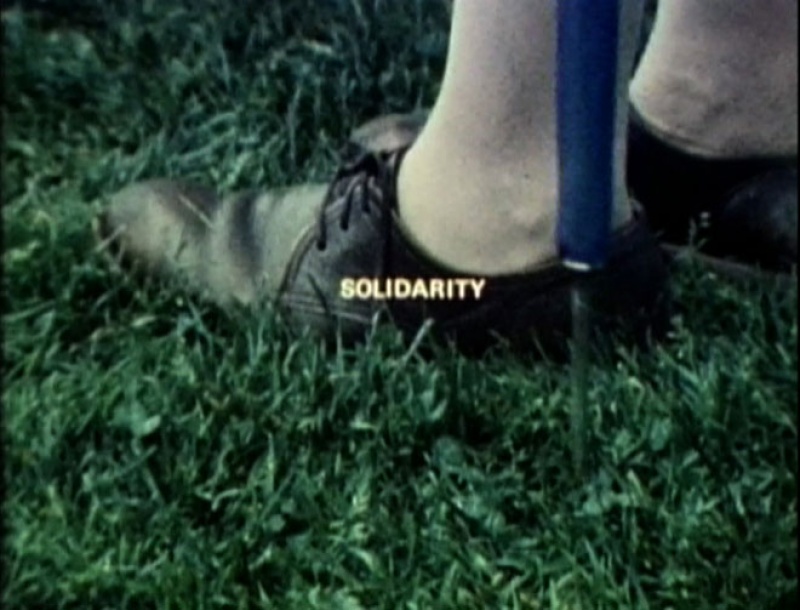 Solidarity
Joyce Wieland, 1973, 10:40 min., 16mm, colour, sound
A film on the Dare strike in Kitchener, Ontario of the early 1970s. Hundreds of feet and legs, milling, marching and picketing with the word “solidarity” superimposed on the screen. The soundtrack is an organizer's speech on the labour situation. Like her films Rat Life and Diet in North America, Pierre Vallieres and Reason Over Passion, Solidarity combines a political awareness, an aesthetic viewpoint and a sense of humour unique in Wieland's work.

Metamorphosis
Barry Greenwald, 1975, 10:30 min., 16mm, b/w, sound
A satiric parable on non-conformity and the rat race. Meeting self-imposed challenges that begin with undressing and dressing in the time it takes for his elevator to descend nine floors, a man develops increasingly complex tasks to perform in the same period. His comical secret life transforms his existence from banality to oblivion. The film makes extensive use of pixelation techniques.

Jim and Muggins Tour Toronto
Michael Kennedy, 1978, 15 min., 16mm, b/w, sound
While leading us on a very personal tour of Toronto, Jim gradually reveals his unfortunate life, optimistic outlook, and friendly manner - all of which are mirrored somewhat in his pitbull's determination and innocence. Labeled by the police as a troublemaker and by his employers as incompetent, Jim will be seen by the audience as someone to be laughed at, someone to be pitied, and finally, as a very friendly and unique personality. The film gives us a sadly cruel yet hilarious perspective on life’s absurdities.

On the Pond
Phillip Hoffman, 1978, 9 min., 16mm, b/w, sound.
Essential to the making of the film was an examination of still photographs. Stills were used as clues to the past. Clues that would bring order and meaning to significant memories. (PH)

"Hoffman's film is in the experimental film tradition of the personal diary, although in this case a beautifully paced mixture of family photographs and dramatic reconstruction interwoven into a narrative creates an objective distance. On the Pond reveals skills of editing, sound and story telling which evoke in ten minutes a complex and emotional study of a family, its past and present, its young dreams and its affections. – Michael O’Pray, Independent Means, Canadian Experimental Films at the London Filmmakers’ Co-op

Weather Building
Ross McLaren, 1976, 10 min., 16mm, colour, sound
The first half of  Weather Building shows an empty room. Through the window is seen the film's central emblem, the lighted tower at the top of an office building. A series of lighting and camera manipulations causes the planes of light in the room to shift and dissolve into one another. This and the soundtrack of footsteps (of someone who never appears) open for consideration a range of conceptions of filmic space.

Part two repeats the "script" of the first half of the film - using a video playback of part one in the "role" of the weather building. There is no window in this second room, and these variations, together with the repetition, simultaneously explicate and complicate the spatial assumptions established earlier.

She Is Away
Bruce Elder, 1976, 13 min., 16mm, colour, sound
The film's projected time is the basic material of this film and is wrought into a simple form which, by its radically reductionist structure, transforms the material of the dramatic form into a tone poem of waiting and anticipation. (RBE)

Circa 1967 – Canadian Filmmakers Distribution Centre (CFMDC) is founded as Canada’s first artist run, not for profit film distribution centre and Canada marks its 100th anniversary as a colonized country. Throughout the ‘70s and ‘80s CFMDC’s catalogue expands substantially, with works by some of Canada’s most groundbreaking artists. Experiments with celluloid, pushing the boundaries of personal and political expressions through the lens of independent filmmaking, this era of growth is the foundation for a catalogue of 3600+ titles by more than 1000 members. In 2017 CFMDC celebrates 50 years of distribution excellence with this program of films from the 1970s.